Childhood Dreams in One Piece

Childhood dreams are a running theme among many of the crew members of the Straw Hat pirates. Learn more about these dreams and how they influence the story of One Piece!

One Piece features strong backstories for Luffy and most of the other members of his crew such as their childhood dreams. In fact, those dreams serve as a driving force for these characters. Read on to learn more about the crew’s childhood dreams and how they are working toward realizing them. 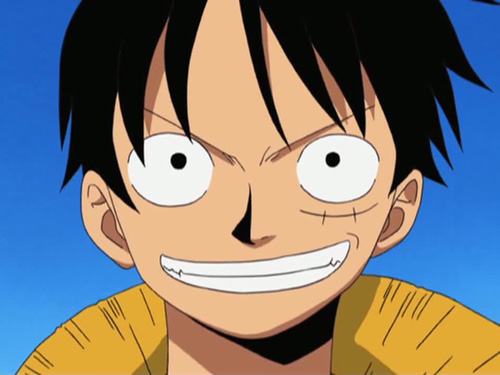 Luffy was raised in Windmill Village. At the age of seven, he befriended a pirate known as “Red-Haired” Shanks and his crew, the Red-Haired Pirates. Luffy looked up to Shanks and wanted to become a pirate himself, and even went so far as to try to join the crew at a young age. Not surprisingly, Luffy was ridiculed and rejected because he was a kid and he became rather upset because of it.

For revenge, Luffy inadvertently ate their treasure, a Gum-Gum fruit that gave his body the properties of rubber. By eating the fruit, Luffy was no longer able to swim and would drown if he fell into water. When Luffy found himself almost being eaten by a Sea King, Shanks rescued him.

After the incident with the Sea King, Luffy gave up on joining with Shanks. Instead, he resolved that he would start his own crew someday and become King of the Pirates. Ten years later, Luffy left Windmill Village to look for the sought-after treasure known as the One Piece, which he believes will help him achieve his childhood dream of becoming King of the Pirates. It’s this dream that sets the entire series of One Piece into motion and brings about the creation of the Straw Hat pirates. 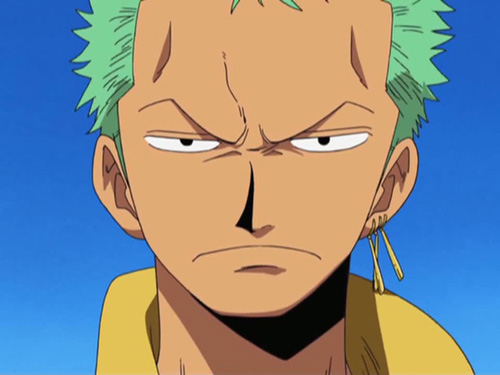 Zoro came from a town known as Shimotsuki, and he trained in sword fighting at a local dojo. His biggest rival was his master’s daughter, Kuina. No matter how often he tried to beat her in sparring matches, he never could. After one particular defeat, Zoro declared that he wanted to become the world’s greatest swordsman. He also promised to her that he would achieve that feat one day. When Kuina died unexpectedly during Zoro’s childhood, his dream became to fulfill the promise he made to her.

This dream becomes the driving force for Zoro’s actions early on in One Piece. As part of his dream, Zoro’s motivation at the beginning of the series is to fight and defeat “Hawk Eyes” Mihawk, the man who currently holds the title of the world’s greatest swordsman. As he traveled the seas in search of Mihawk, Zoro made a living as a bounty hunter.

When Zoro first joined up with Luffy, he made it clear that he still intended to go after Mihawk. But when Zoro found him, Mihawk was able to defeat him rather easily. After this defeat, Zoro still had his childhood dream of becoming the world’s greatest swordsman, but it started becoming less of a driving force than it was when he was first introduced. Later on, Zoro convinced Mihawk to take him on as a student so he could train and improve his skills in order to get closer to accomplishing his dream. 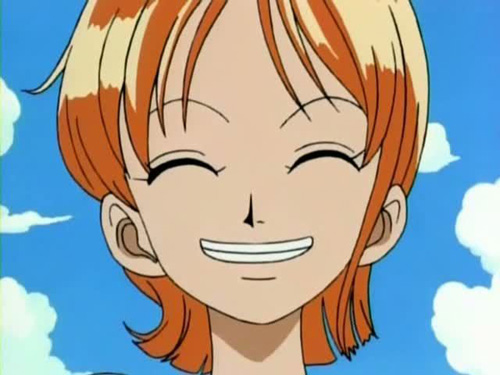 Nami was adopted and raised by Bellemere, a Navy seaman who became a tangerine farmer. They, along with Nami’s adopted sister Nojiko, lived in Cocoyashi Village. As a child, Nami developed a love for drawing maps and navigation, and her childhood dream was to draw a complete map of the world. Unfortunately, due to her family’s financial situation, Nami often stole navigation books from the village bookstore in order to teach herself how to draw good quality maps that didn’t appear to be drawn by a child.

When the fishman Arlong came to Cocoyashi Village, he imposed a fee on every single adult and child living there. Bellemere only had enough to cover Nami and Nojiko, and she was killed by Arlong. But when Arlong discovered Nami’s talent, she was kidnapped and forced to become a cartographer for him. But he struck a deal with her: if she could bring him 100 million berries, he would free everyone in Cocoyashi Village.

Early on in One Piece, Nami’s driving force was to raise the money in order to free the other villagers. Thanks to help from Luffy and the Straw Hats, Arlong was driven from Cocoyashi Village and the people were freed.

Nami now continues to pursue her childhood dream while traveling with the Straw Hats. As they go on their voyages, she works at trying to complete a map of the Grand Line. 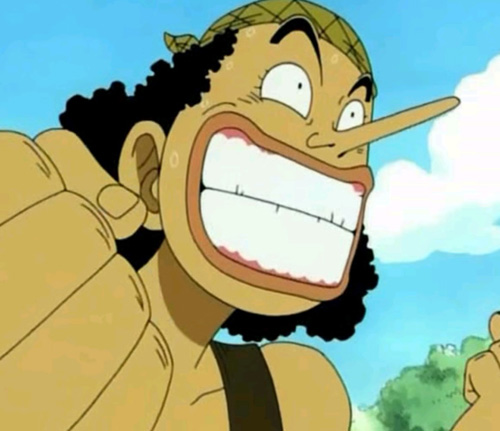 Usopp grew up in Syrup Village and was raised by his mother, Banchina. His father, Yasopp, abandoned his family in order to join the Red-Haired Pirates. Usopp didn’t blame his father for leaving, and his childhood dream was to become a great pirate himself. Unfortunately for Usopp, he has a cowardly disposition. But even though he’s cowardly, Usopp has a special skill where he can use slingshots to fire ammunition with absolute precision. He’s also an inventor.

When Banchina fell ill, Usopp began telling tall tales and expressing his hope that Yasopp would return and take them out to sea. Even after his mother’s death, Usopp continued to tell tall tales in order to make it sound like he’s braver than he really is. He also founded a group called Usopp’s Pirates with some of the young boys in the village.

After meeting Luffy and the Straw Hats, Usopp decided to leave Syrup Village. Luffy convinced him to join up with them, and Usopp continued to tell his tall tales. But as he traveled with Luffy and the others, Usopp began receiving recognition when he disguised as his alter ego, Sogeking. He also managed to do something that surprised even himself when he protected the toy workers in the Dressrosa arc. This caused Usopp’s bounty as a pirate to increase, and this helps to lead him toward his childhood dream of becoming a great pirate. 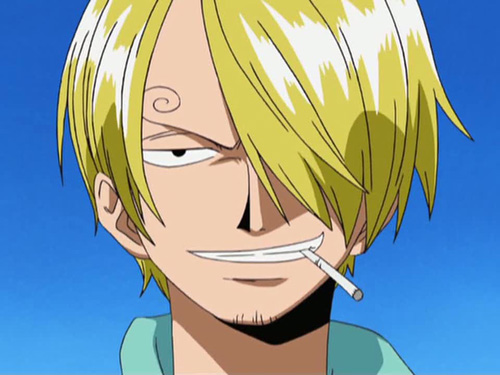 Sanji worked as an apprentice cook on a passenger ship when he was nine years old. His childhood dream was to find the All Blue, a legendary sea where the East Blue, the West Blue, the North Blue, and the South Blue meet. It’s said that every kind of fish in the world lives there and that it’s considered a chef’s paradise.

When the passenger ship he worked on was boarded by “Red Foot” Zeff and his pirates, Zeff heard Sanji’s dream and realized that it matched his own. After Sanji was swept into the sea by a massive wave, Zeff jumped in to save him. They lived together as castaways, and Sanji learned about his dream of building a floating restaurant. After the two of them are rescued, Sanji stayed with Zeff and helped him build the floating restaurant Baratie. Zeff taught Sanji how to become a first-rate cook and how to fight with a kick-based fighting style.

Sanji was the sous chef of the Baratie when he met Luffy and the Straw Hats. After Sanji helped Luffy defeat Don Krieg, he realized that traveling with the Straw Hats could eventually lead him to his childhood dream of discovering the All Blue. 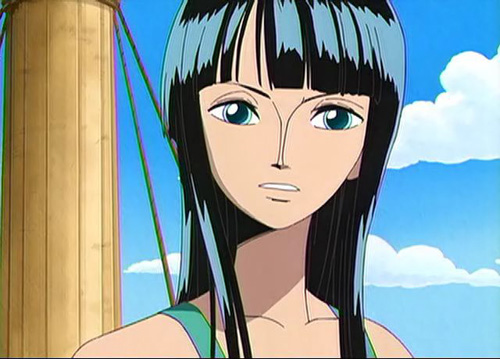 Robin grew up in Ohara, the home of the world’s oldest and largest library, and became an archaeologist at the age of eight. But behind the backs of her teachers, Robin acquired the outlawed knowledge of how to translate the ancient stones known as Poneglyphs, which are scattered around the world. Robin’s childhood dream was to locate the Rio Poneglyph, which is said to tell the world’s lost history. This was also the goal of her teachers.

The World Government found out about their efforts and sent a battle fleet to stop them, since it was made a crime to research and decipher poneglyphs. When the government attacked Ohara, everything was destroyed, and Robin was the only survivor. A bounty was placed on the young girl’s head, and she lived her life on the run by cooperating with various pirates and outlaws. She eventually ended up with Baroque Works under the code name “Miss All Sunday.”

When the Straw Hats encountered Baroque Works and ultimately caused the group to fall apart after defeating it, Robin decided to travel with the Straw Hats, since she had nowhere else to go. Also, Robin realized that traveling with them would allow her the opportunity to pursue her childhood dream of locating the Rio Poneglyph. 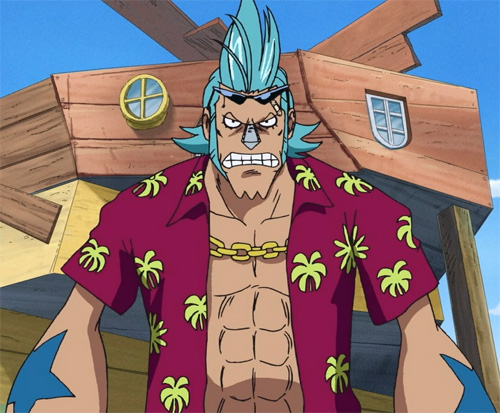 Franky’s real name is Cutty Flam, and he was the son of pirate parents who abandoned him when he was 10 years old. He was taken in by Tom to serve as an apprentice shipwright and was given the nickname of Franky. His childhood dream was to create and ride on a ship capable of circumnavigating the world.

It turned out that Tom held the plans for a devastating ancient weapon, and the World Government wanted those plans any way that it could get its hands on them. When Franky did something reckless with some of his inventions, it provided the government the opportunity it needed to capture Tom. When Franky tried to save Tom, he ended up suffering from serious injuries. Franky survived by rebuilding parts of his body using scrap metal and turning himself into a cola-powered cyborg with super human strength.

Franky met the Straw Hats when the Going Merry ship was on its last legs. When they first met, Franky’s group and the Straw Hats were enemies. But after the Straw Hats teamed up with the Franky Family to fight against a secret organization affiliated with the World Government, Franky joined Luffy’s crew as a shipwright. Franky worked toward fulfilling his childhood dream by building the Thousand Sunny, a new ship for the Straw Hats.

As you can see, many of the main characters in One Piece have a childhood dream that gives them a reason to be part of the Straw Hats. As the crew members spend time together, they start to make slow and steady progress toward achieving their individual dreams.