Chuunibyou demo Koi ga Shitai! and the Legacy of Haruhi

Chuunibyou demo Koi ga Shitai! takes plentiful influence from Suzumiya Haruhi no Yuutsu. However, it twists that show's formulas in new ways to create an original comedy/drama anime with profound takes on escapism and teenage embarrassment. 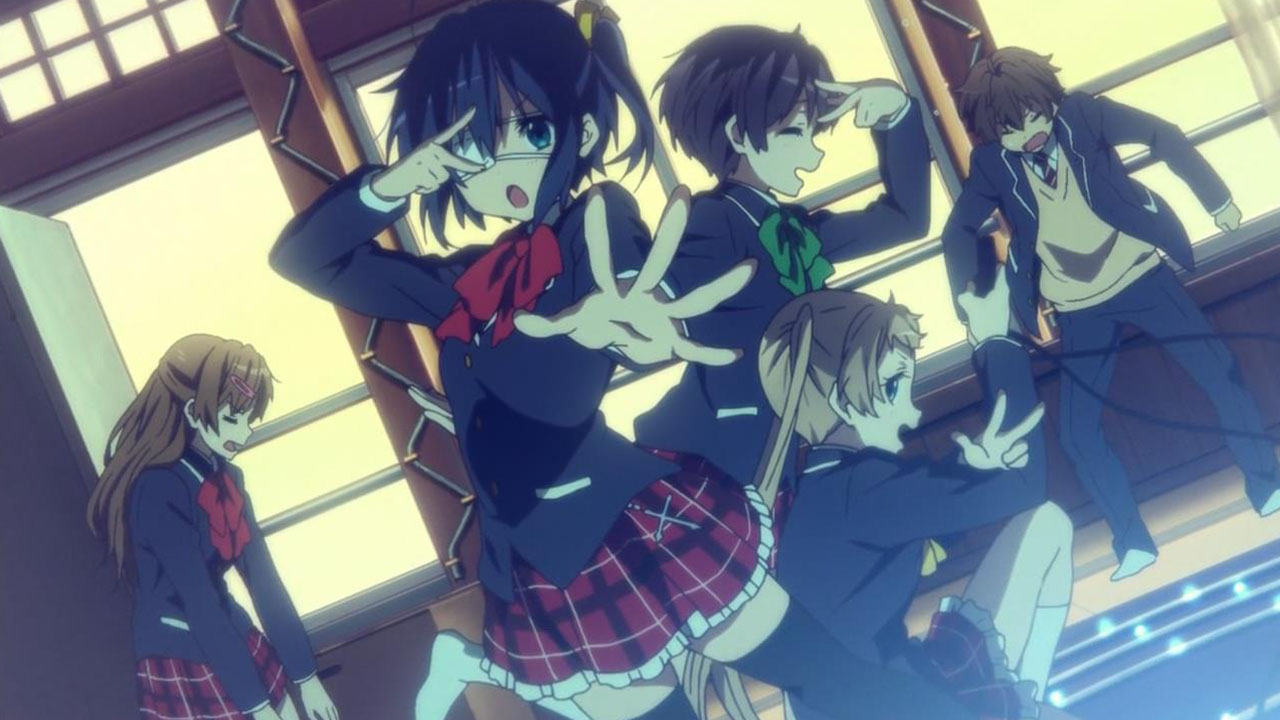 Stop me if you heard this one before: a light novel is turned into an anime series by Kyoto Animation. The story is told from the perspective of a teenage boy who once believed in the supernatural but has since resigned himself to a life of normality. However, his efforts to be a “normal high schooler” are all for naught because he’s dragged into the comedic misadventures of a female classmate obsessed with the weird and supernatural. This classmate seeks a club that meets her interest, and so she starts her own club, dragging along the “normal” boy and merging with a failing pre-existing club in a desperate attempt to get enough members. The new club doesn’t ever actually do much, but the members of the club start to learn about and bond with one another as unspoken attractions develop. The anime’s a hit, leading to a film and a sequel series being released years later. Oh, and there's a funny dance in the end credits. 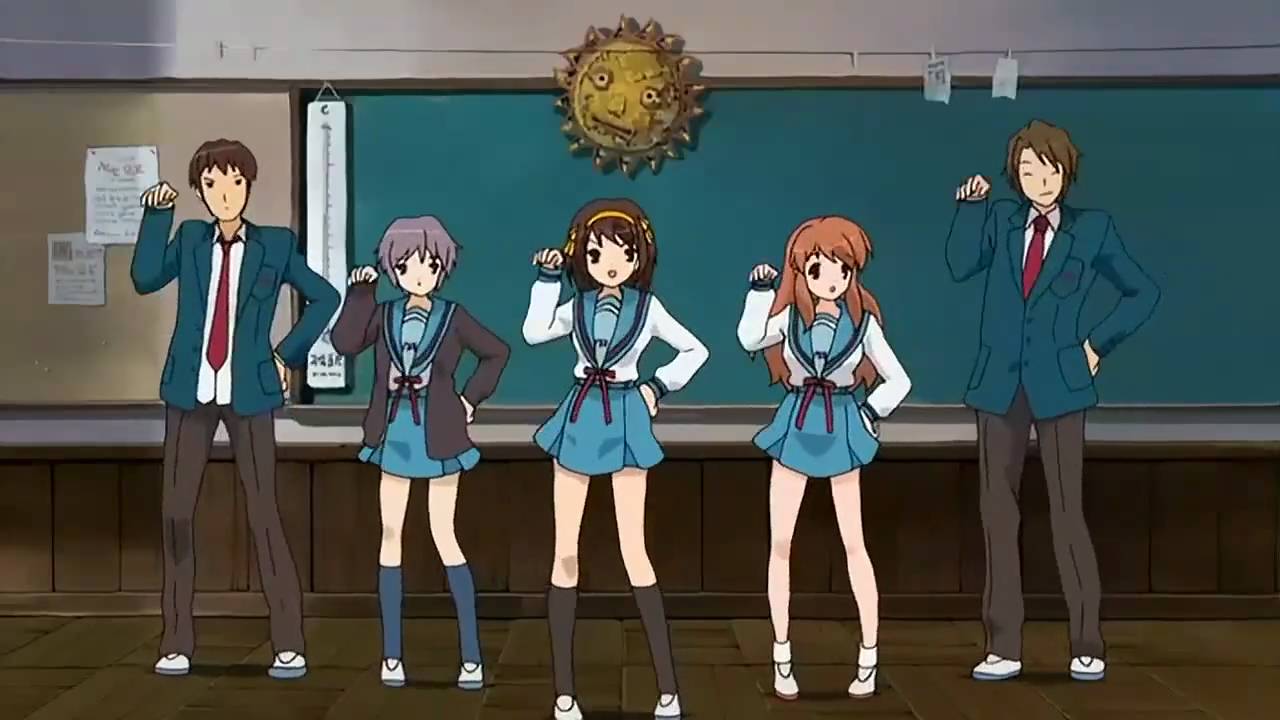 Yes, that first paragraph accurately describes Suzumiya Haruhi no Yuuutsu (The Melancholy of Haruhi Suzumiya). It also describes Chuunibyou demo Koi ga Shitai (Love, Chunibyo, and Other Delusions) with equal accuracy. Yet Chuunibyou is no mere rip-off of KyoAni’s most popular franchise. Haruhi was almost certainly on Torako’s mind when he sent off their book to the Kyoto Animation Award competition, and its influence is felt throughout the series. But Chuunibyou (also known as Chuu-2 for short) twists the Haruhi formula in distinctive ways in order to address different themes and concerns.

The most obvious difference between Haruhi and Chuu-2 is in the two series’ very different realities and how their protagonists interact with them. Haruhi’s set up is a giant cosmic joke: aliens, time travelers, and ESPers not only exist, but they’re all friends with Haruhi, who’s not allowed to know about paranormal happenings around her. Haruhi has god-like powers but again, she’s unaware of them; if she knew she had such power, she’d probably warp reality into unrecognizable horrors. Rikka, the protagonist of Chuu-2, is also interested in fantastic beings but her relationship with the fantastic is the opposite of Haruhi’s: where Haruhi is unaware that she has powers and is living in a world of science fiction, Rikka has convinced herself she has magic powers despite being a regular human being living in a normal reality.

Chuu-2 reverses the joke of Haruhi, and it’s still a very funny joke. Chuu-2 is easier to relate to: nobody can know for sure what it would be like to live surrounded by anime-inspired sci-fi/fantasy wackiness, but many can remember what it’s like to either know or to have been an overenthusiastic kid who believes they’re a wizard or an anime character or such. Chuu-2’s comedy is funny because it rings true. It’s also expertly directed by Tatsuya Ishihara, the same man responsible for the Haruhi series as well as the hilarious Nichijou. The detail, fluidity, and timing of the animation is perfect, and the cuts between what’s going on in Rikka’s action-packed imagination and what’s actually happening simultaneously in real life always draw a few laughs.

For its first six episodes, the original Chuu-2 series gets by mostly on comedy, with just a hint of psychological intrigue in regards to why Rikka is the way she is. The second half of the series isn’t without its laugh-out-loud moments, but the plot refocuses on Rikka’s psychology as well as the romantic element hinted at in the title, and the tone shifts accordingly. It deals with realistic psychological issues of grief, mourning, and escapism, and the ways in which such escapism can be both healthy and unhealthy. Haruhi could occasionally get serious, touching on questions like what it means to be special in a world filled with billions of people, but its tone always leaned towards light-hearted, never taking itself too seriously. The achronological episode order of the first series served to only further mess around with tone and break up darker storylines with fluffier ones. In contrast, the tonal shift in Chuu-2 is distinctive and noticeable, beginning with the visit to Rikka’s grandparents in episode 7. Haruhi’s social inappropriateness is never treated as a serious issue because Haruhi always has a way of bending situations to her will. In contrast, Rikka’s awkwardness is treated as a deeper personal issue that causes her to struggle with a challenging reality. In some ways she’s probably a healthier person to be around than Haruhi; certainly she never tortures any of her acquaintances the way Haruhi continually harasses Mikuru. But she’s less capable of coping with the world around her. She can’t address what upsets her so she runs away into fantasy. Her fantasy world in some ways helps her but in other situations avoiding her problems only causes them to build up. Yuuta, her friend and crush, has to communicate her in the language of her fantasy world in order to make sure her fantasies are helping her rather than making life more difficult for her. 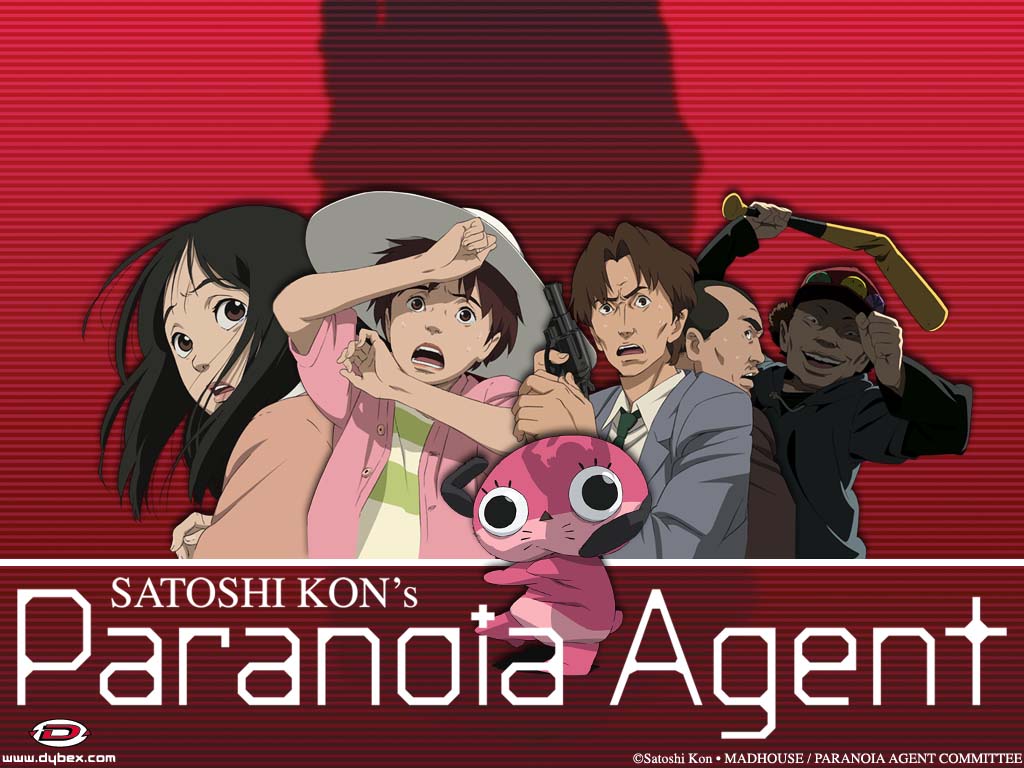 In that particular sense, Chuu-2 has less in common with Haruhi than with an otherwise very different anime: the late Satoshi Kon’s Mousou Dairinin (Paranoia Agent). Mousou Dairinin is a 13 episode TV series episodically organized as a collection of character studies loosely bound by the central mystery of “Little Slugger”, a kid attacking people with a baseball bat who may just be a collective delusion. Everyone in the series gets caught up in one form of delusional fantasy or another. The most chuunibyou-esque of these fantasies comes in episode 5, wherein a suspect in the Little Slugger case believes himself to be a “Holy Warrior” in a video game. Unlike Rikka, the “Holy Warrior” turns out to be something of a lost cause psychologically. However, the detective Maniwa is able to get useful information from the suspect by playing along with his video game fantasy, and as the series progresses, Maniwa is able to be heroic by embracing the chuunibyou-style superhero persona of “Radar Man.” Mousou Dairinin is a much darker series that Chuu-2 in that it shows much more dramatic extremes of how escapism left unchecked can produce devastating results, but it shares two interesting philosophical conclusions with Chuu-2’s ending: that escapism and self-delusion are universal human traits, and that such traits if kept under reasonable control can actually be healthy and enjoyable. 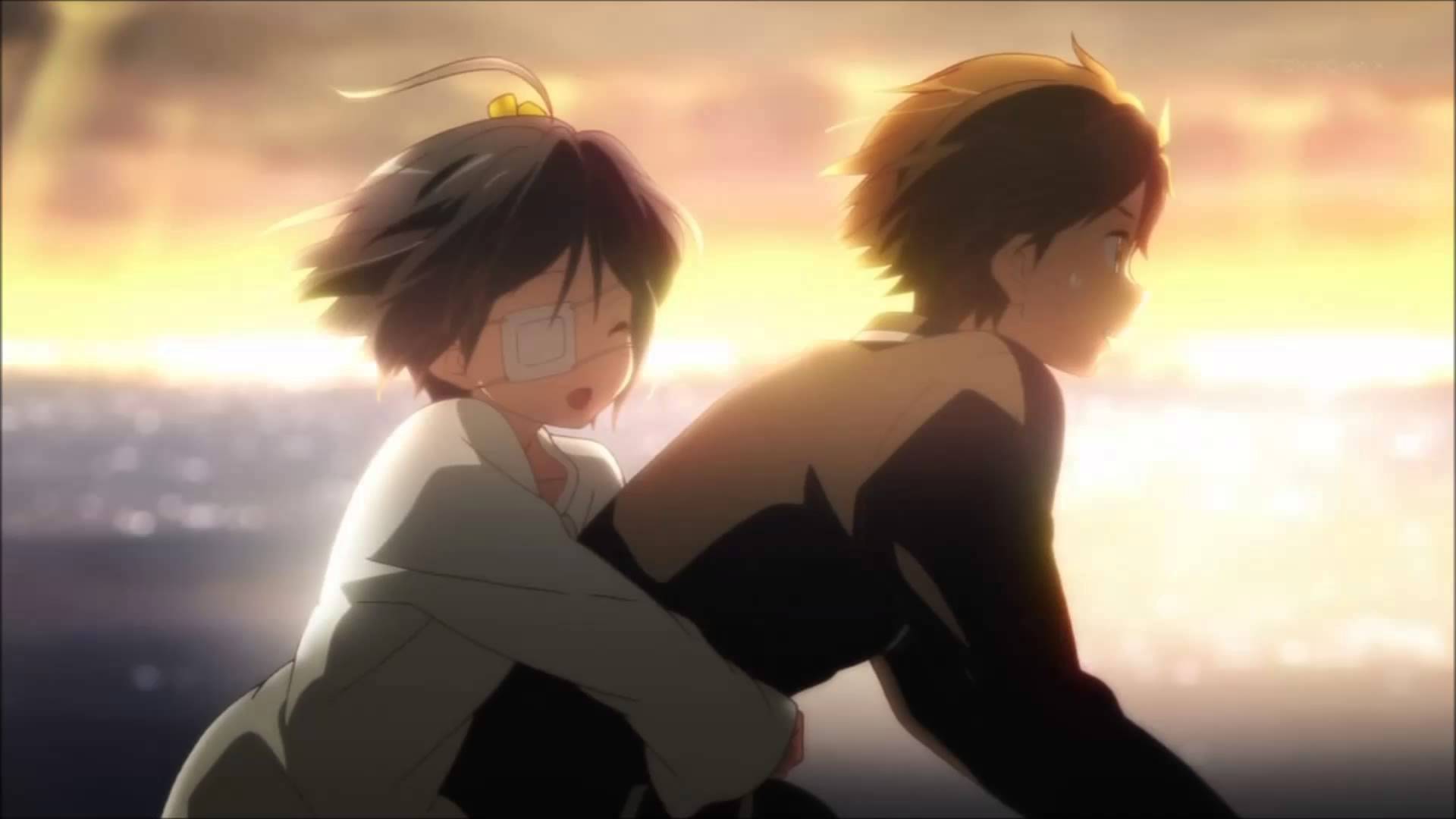 In coming to these conclusions, Chuu-2 twists Haruhi’s source of anxiety into Yuuta’s source of comfort: where Haruhi is scared that she can’t stand out if there’s millions of others just like her, Yuuta is able to accept his own chuunibyou past and Rikka’s chuunibyou present by realizing that they’re not alone and that there are others like them. In this path to acceptance, a series that started as primarily a comedy of embarrassment ends up embracing an emotion central to KyoAni’s body of work: nostalgia. From tear-jerkers like Clannad to casual slice-of-life comedies like K-On to campy fanservice romps like Free, KyoAni’s success has been tied to a nostalgia for youth. Their shows tend to air late at night and, though they can be enjoyed by teenagers still in high school, are primarily aimed towards slightly older adult otaku looking back on their high school years with nostalgia. But youth isn’t all adorable tea times or muscular beach bods or even beautiful tragedies. Sometimes it’s just awkward and embarrassing. Yet even that awkwardness and embarrassment, it seems, can be looked back upon with fond sweetness. Haruhi lightly touched upon this through the character of adult-Mikuru, who could look back on the memories that were embarrassing to her younger self with a different, more positive perspective. Chuu-2 puts this dynamic in the spotlight. It builds a premise based on what many agree to be one of the most embarrassing phases of youth, the delusional “chuunibyou” phase, and at first seems to be about laughing at it in embarrassment. Then it turns from comedy to drama, and in that drama both its characters and its viewers come to some major realizations. While such phases can indeed be highly embarrassing, they still affect who you are as a person and can in fact be a positive force in people’s lives. The eccentricities of the chuunibyou take on different characteristics as we mature but such dreams never completely go away. In many respects we’re still the same people as adults as we were in middle school and high school, and while it’s perfectly healthy to feel some embarrassment and be able to laugh at ourselves, we are also able to look at those phases in a more positive light and appreciate the experiences that made us who we are today.

Fans of KyoAni’s other shows, as well as anybody who remembers their teenage fantasies with either fondness or shame, should definitely give Chuu-2 a watch. The show and its sequel series are both on Crunchyroll for your enjoyment.