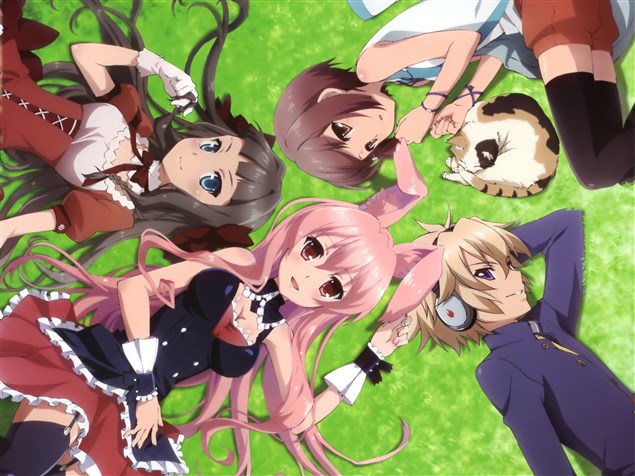 Problem Children Are Coming From Another World, Aren’t They? (Mondaiji-tachi ga Isekai Kara Kuru Sou Desu yo?) is based off the Japanese light novel series written by Taro Tatsunoko and illustrated by Yu Amano. Diomedea created the anime adaptation, which aired from January 11, 2013 to March 15, 2013.

Exactly as the title implies, this anime starts off introducing the problem children: Izayoi, Asuka, and You. They each come from different worlds and eras, which incorporates the theory of the multiverse: The theory that states that many universes reside parallel to each other. Their backgrounds are similar in that they all have a bleak outlook on life due to their powers. After receiving a mysterious card, or rather invitation, each is transported to the world of Little Garden - a universe made with its own governing society. It’s here that Black Rabbit, an aristocrat of Little Garden, introduces herself and the basic rules of this new world. 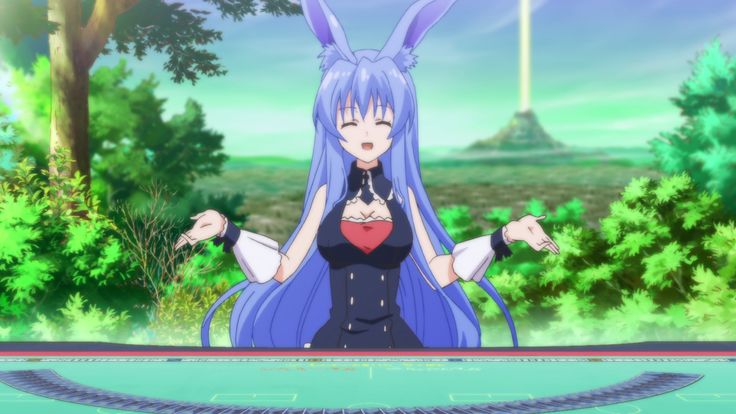 The concept of life in Little Garden is based off of "Gift Games" - special challenges that typically involve a host and a prize. The host provides the game location and propositions the prize. Rewards can range anywhere from the lottery to something more serious, such as a person’s life. It’s also applicable to establish a Gift Game with the goal of gaining more territory, or community. The limitations and rules are then depicted on a "Geass Roll" (parchment scroll) which appears after a game has been established between two parties. With that said, Black Rabbit challenges the three to a Gift Game in hopes of testing them to make sure she chooses the correct people to help rebuild the status of the No-Name community. 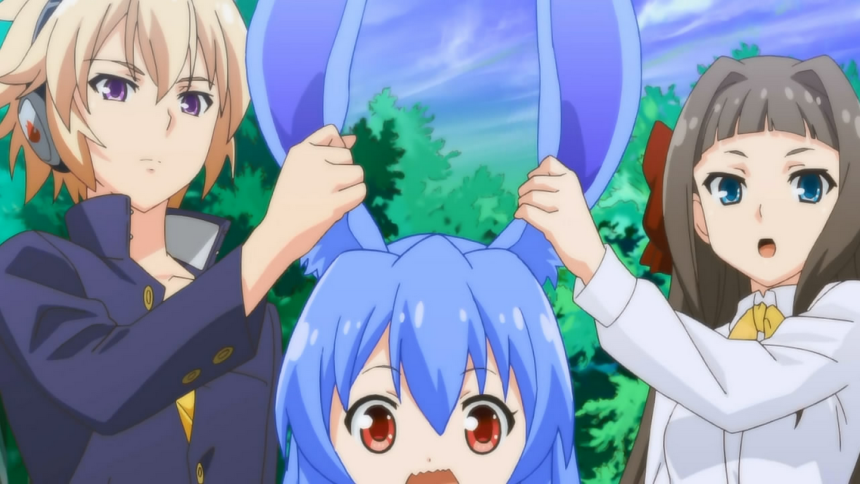 Little Garden is comprised of different communities and with each community comes a reputation that is identified by a name and banner. The No-Name community was once a place of prominence, but was completely demolished in a round of Gift Games. How could this have happened? It’s simple. A Gift Game proposed by a Demon Lord cannot be denied. The No-Name community now lies on the outer-most limit of Little Garden’s several layers. These layers are accessible through gates, which are openings found in the wall of the layers. Gate numbers are coded in accordance to their distance from the center of Little Garden. The smaller the gate number, the closer a community is to the center. Also, the closer to the center, the stronger the community. Four-digit gates to the center are said to be upper levels, while the five to seven-digit gates are considered lower levels. The No-Name community resides on the outer edge and is therefore a weak, seven-digit gate.

~The Myth of Perseus and Medusa~ 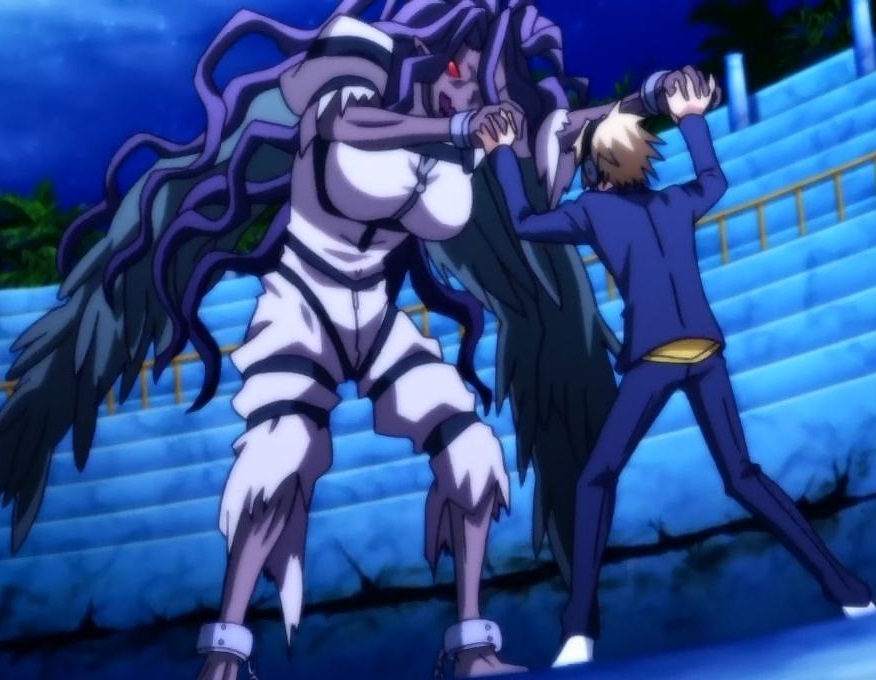 When the No-Name community accepts a Gift Game declared by Perseus, it’s almost assured that there’s no way for them to win. However Izayoi, the problem child that he is, has a plan of action in mind. It’s when the group encounters invisible guards that a hint of the historical myth is noticeable. The myth states that Perseus received the aid of a helmet to gain invisibility, as in Problem Children Izayoi takes the helmet of the invisible guards and becomes invisible himself. Further traits linked to the mythological tale of Medusa are also found in the anime when the No-Name community goes against Perseus. It is said that Medusa was once a fair maiden, but was cursed to become a beautiful beast with live snakes streaming from her head. In the anime, Perseus summons Demon Lord Agol, who can be seen as a symbolic form of Medusa. Agol is also a star from the Perseus constellation. Historically, Perseus is the name of the man who slayed Medusa, but the anime incorporates Perseus as a community. This is fitting, since the mythological background states that Perseus kept the head of Medusa, while in the anime the leader of Perseus has Agol under his command. Another similarity to look for is the power that Medusa and Demon Lord Agol possess - the ability to turn people into stone. 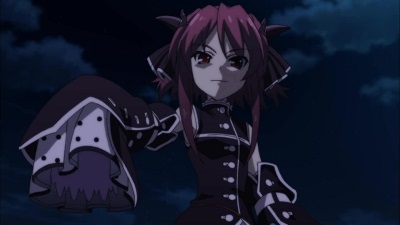 The Pied Piper of Hamelin, also known in its German form as Rattenfanger von Hameln, is a subject of legends that originated in the middle ages. The first reference of this legend occurs when we are introduced to a fairy that Asuka has taken a liking towards. One of the first words the fairy speaks is ‘Rattenfanger’, which is the name of the community where the fairy comes from. A second reference to the tale comes in the form of a rat infestation. The town of Hamelin became infested with rats, and a Piper was called in to lure them away. However, in the anime, an infestation of rats come for Asuka and the fairy as they look around at exhibits. Another reference to this legend is the discussion of the community Grim Grimoire that challenged the Piper of Hamelin community to a Gift Game. As the No-Name core and Shiroyasha discuss the Piper of Hamelin, the legend is told. They describe the legend as one of Grimm’s Fairy Tales, where in the year of 1284, June 26, a hundred and thirty children were seduced by a Piper clad in an array of colorful clothing. In the end, the children were taken to the mountain of Koppen, a place of execution. The anime describes the Piper of Hamelin as Rattenfanger, who is a man that can control rats. Soon after this tale, the community of Salamandra is forced into a Gift Game with the Demon Lord of Hamelin. Those that are sent to do Hamelin’s bidding are Black Perch, Weser, and Ratten. Black Perch coincides with the legend that the town of Hamelin was originally infested with the plague and not rats. Weser corresponds to name of the river that was used in the original tale where the Piper lured the rats to be drowned. Ratten plays a flute that entrances those around her to fall under her spell, which corresponds to the original tale of the Piper. 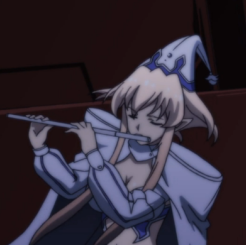 Asuka is captured, but the spirits of the one hundred and thirty children who were sacrificed wish her to end the false fairy tale. This scene corresponds to the original tale where the children were taken to mount Koppen and executed. When Asuka encounters the spirits, they wish to tell her the truth and let her know that they died of natural causes and not by a mystical Piper. As Asuka takes on a Gift Game proposed by the souls, Izayoi and You discuss a way to solve the current Gift Game of Hamelin. One of Izayoi’s theories is to shatter stained glass. This is significant to the Piper of Hamelin, since the story was originally depicted from stained glass set in a church. The conclusion of the Piper of Hamelin in the anime is resolved when the spirits of the children tell the truth to Asuka. The children went singing near the Weser River while one of them played a flute. Their goal was to create a community of their own. This is what occurred when the children left their parents, and eventually they died of natural causes. With that, the spirits left Asuka and the fairy, and left Dean in Asuka’s care.

Maybe you’ve just finished watching this fantastic anime and are looking for something similar. Well, here are a few to get you started. Enter the bizarre world of Disboard, where the anime No Game No Life takes place. This series focuses on team Blank, a gaming team comprised of the main characters Shiro and Sora. Together, they challenge the toughest opponents and must use their wits to survive in a world based entirely off of game play. Another anime that may spark your interest would be Dungeon ni Deai wo Motomeru no wa Machigatteiru Darou ka (Is It Wrong to Try to Pick Up Girls in a Dungeon?) Don’t let the title fool you, this anime has its twists and turns in an action packed tale. Bell Cranel, the only familiar of Hestia, must make his way from the bottom ranks of the dungeon to the top. The Gods have come to live their lives on earth, but what sort of mischief can they get up to? Of course, this adventure will be riddled with growth, new friendships, and amazing plot twists. Lastly, the action featured title K is another anime packed with action and superpowers. Take on a journey with Shiro as he’s accused of murder and nearly killed on various occasions. The mix of charm and tension collide to incorporate a fight between different worlds and histories. So, if you’re feeling adventurous, take a peek at any of the above mentioned anime. Before you know it, you’ll be hooked. 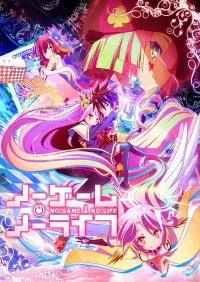 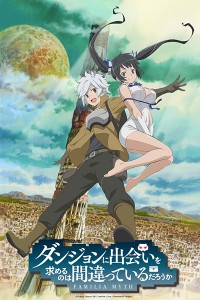 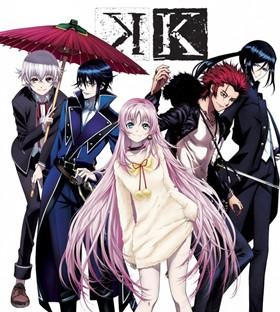