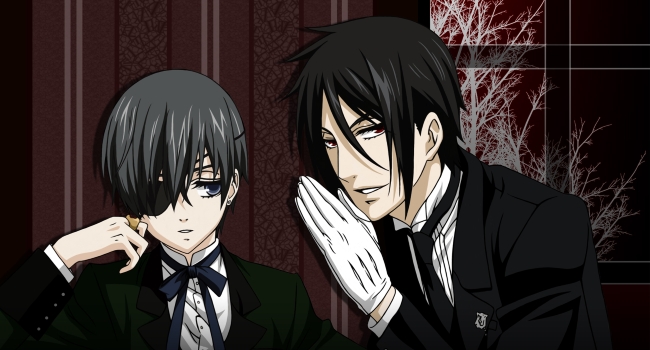 Kuroshitsuji (Black Butler) is a supernatural mystery, set in Victorian England. It follows the adventures and life of Ciel Phantomhive, a young heir to the Phantomhive household. He serves as the Queen's Watchdog, eradicating England's underworld of the possible threats to the throne. His main asset is his butler Sebastian, whose abilities and cunning seem to be out of this world. So, what's so unusual about this series, and what flavor does it offer to those who decide to watch it? Let's pick it apart and see. 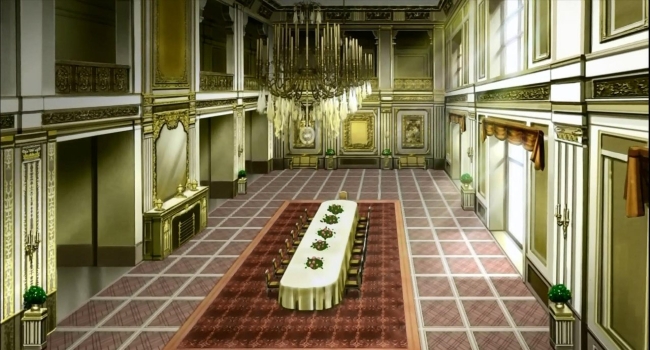 The story of Kuroshitsuji is set in the later half of the 19th century, the year 1887, to be precise. Although historical events in Kuroshitsuji are somewhat skewed and most of the characters never existed, they nevertheless fit into the general real-world timeline. Considering that any supernatural elements are kept from the public eye by the protagonists, the world of Kuroshitsuji isn't far from a stylistic depiction of real Victorian England. The level of technology is more or less the same as it was in the 19th century, with a couple of exceptions. Culture and psychology of the characters are a great depiction of Victorian court intrigues, where the people's true intentions are always hidden behind a mask of complex manners and flattery.

The world of Kuroshitsuji is far from simple, however. Unseen by the public eye, supernatural beings and powers control the world from the dark. Demons and angels battle for the human souls, while humanoid puppets and ghosts inhabit old manors. England in Kuroshitsuji is only pleasant on the outside, and gets more frightful and disgusting the deeper you look into it. Although there is goodness in the world, it's too easy to twist it into something ugly. But the clash of British manners and the violent and dark underworld isn't the only unique thing about the series. 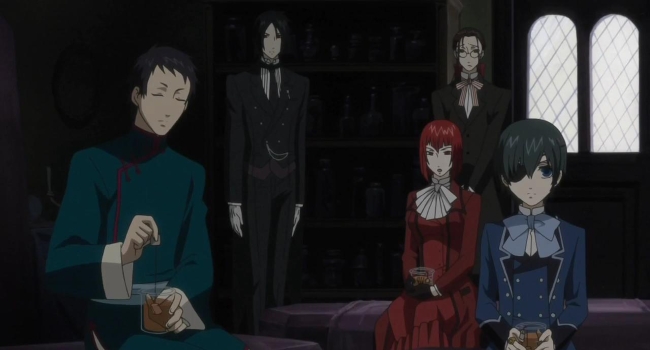 Kuroshitsuji is unique for several reasons, the biggest reason being its characters. It boasts such morally corrupt, violent and egotistical characters that by the end of the season you wonder if any of them should even be allowed to live. However, these characters aren't completely evil - they're merely survivors, trying to reach the top of the food chain, be they heroes or villains, humans or demons. Even Ciel, the protagonist of the series, isn't righteous or noble in any sense of these words, and only looks good when compared to murderers, rapists and thieves that he gets to mingle with on a daily basis. The series really manages to show duality of aristocracy, and while there are many scenes that let the viewer indulge in life and riches of the privileged, it does so with a huge, unseen asterisk that most of these people are pretty disgusting, if you look past their perfect postures and tailor-made clothes.

The second reason why Kuroshitsuji is unique, is its setting. While Victorian England is a popular theme in anime, it mostly offers a fashion style and maybe a couple of aristocratic characters. Few series are actually set within the historical British Empire. Kuroshitsuji not only pulls it off, but also makes it in a surprisingly believable way. It still contains all of the hyperbolic aristocratic elements that many other anime series are filled with, but instead of making the story revolve around the privileged world, Kuroshitsuji delves deep into the mysterious and dirty underworld, meshing equal parts aristocracy, crime, mystery and horror.

The last reason that Kuroshitsuji is unique, is its ability to clash together historic realism and absolute fantasy. Demon butlers exist alongside circus snake charmers, and slave trade is performed to fuel satanic rituals. The anime does a great job combining historical facts with fantastic elements, producing a unique flavor of mystery storytelling. 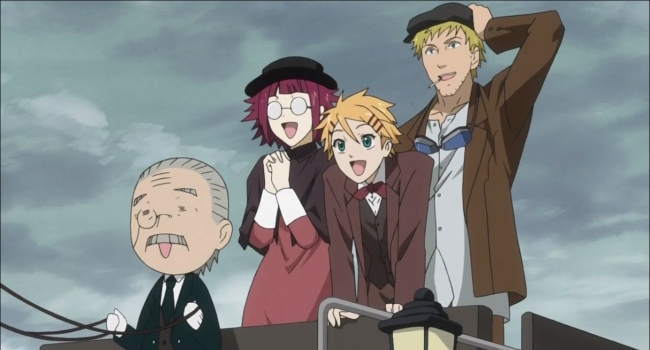 It should be noted that the manga is very different from the anime in style and mood, so it's not a guarantee that you'll enjoy the manga version even if you liked the series, and vice versa. The manga is a lot more story-driven and has a lighter tone, with dark story elements counterbalanced by jokes and references, while the anime is a lot more dark and dramatic. The relationship of Ciel and Sebastian is also vastly different. I won't get too deep into it, but keep that in mind. Overall, if you like mysteries, noble houses and fantasy elements within a realistic world, Kuroshitsuji is up your alley. Also, the series is filled with the courtly manners and over-the-top aristocratic life. If you enjoy phrases like "lightly boiled Darjeeling in sky-blue porcelain tea set with strawberry parfait", you'll like Kuroshitsuji.

Finally, the series is filled with character drama. If you like watching complex relationships, where even the most disgusting villain makes you feel sorry for the way life treated him, or watch as good people get twisted into monsters by the evil surrounding them, or try and resist it, you'll find a lot of it here. It'd also be unfair to forget about the implied relationships in Kuroshitsuji. If you're soft on the shipping side, your mind will definitely have a lot of places to wonder.

While Kuroshitsuji has its unique flavor, its elements are far from unique in the anime industry. Butlers are as common as Death Gods, and British culture is a welcomed guest in many series. There are tons of anime series with a butler/master relationship, so I'm just going to list a couple of the most closely related. The first, obvious and closest example that springs to mind is, of course… 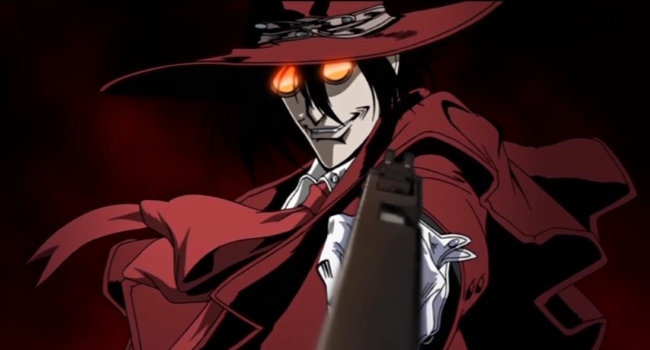 A cold-hearted head of a noble British household, whose greatest weapon is a demon of seemingly infinite power, wages war against enemies of the crown - you don't get any closer than that. Kuroshitsuji actually seems to borrow more than a few character elements from Hellsing, although it's quite different in its tone. While Kuroshitsuji is a slow-paced mystery fiction, giving lots of time to world-building and character growth, Hellsing consists entirely of over-the-top bloodbath action. It pulls no punches and goes all out every step of the way. Alucard may very well be a prototype for Sebastian, but where Sebastian shows restraint and subtlety, Alucard laughs like a maniac he is and kills everyone in the most brutal way possible. If you like Kuroshitsuji, but would like to watch something 10 times more crazy and action-packed, Hellsing is for you. 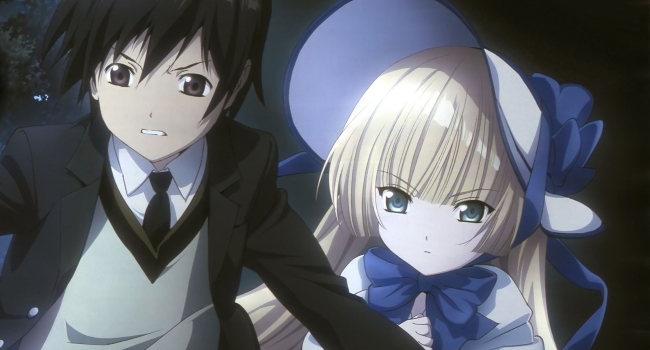 Gosick is similar to Kuroshitsuji both in its style and in tone. The main characters in Gosick are a young son of a high-ranking officer in the Imperial Japanese Army and an eccentric genius girl. Together they solve mysteries that surround St. Marguerite Academy, and the rest of the fictional European country. There are no butlers, but there is an abundance of European style, although it's French, instead of English. This is combined with an old-world charm, although it's 1924 instead of 1887. It's also focused on mysteries and a genius protagonist, although Gosick is somewhat lighter than Kuroshitsuji, bordering on romance. 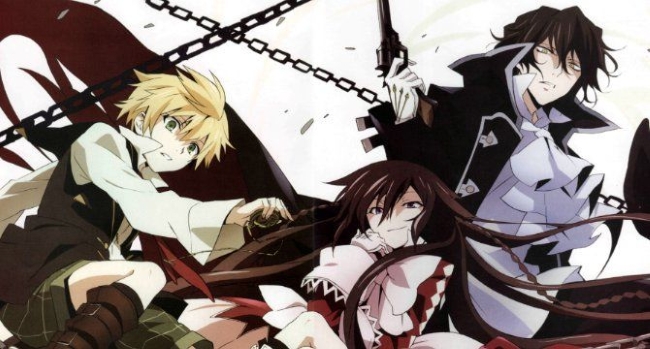 Another series that follows a similar structure to Kuroshitsuji is Pandora Hearts. It shares a similar master-servant relationship between the main characters, as well as affection for English noble culture. Story in Pandora Hearts follows young Oz Vessalius, a heir to the Vessalius Duke House. He travels with his lifetime servant Gil, and a mysterious demon girl, called Alice. Together they battle cults and demons, while trying to unlock the secrets to their destiny. Pandora Hearts is a typical Shounen, and somewhat staple in its structure, but it still has similarities to Kuroshitsuji. You should watch it if you would like some more action in Kuroshitsuji, but not quite as violent and crazy as Hellsing. 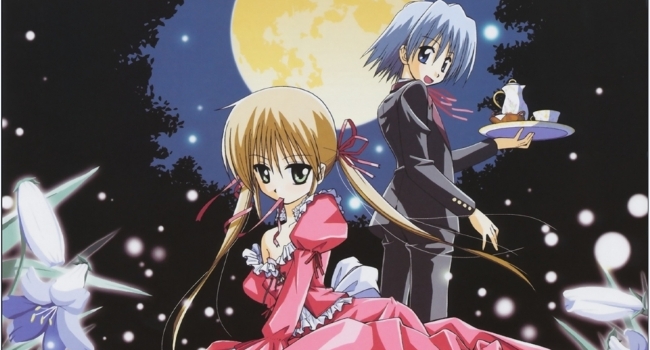 Well, it's all in the name with this one. Hayate No Gotoku - or Hayate The Combat Butler is another Shounen anime about a boy who, through series of unfortunate events, ends up working as a butler to a rich family, having to protect the young daughter of the family from various threats. It's got a lot more school romance and shenanigans than the titles above, and is fitting if you want some light series that keep going for a while. 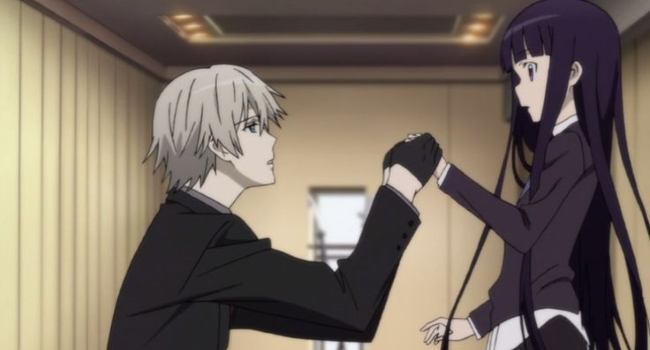 If you don't really like action, or mystery, but would like a focus on a romantic relationship between the butler and his master instead, Inu x Boku SS is just for you. It's a Shoujo anime, but it's fun to watch even if you're not the target demographic. It's a romantic comedy about a half-demon girl who lives in a mansion built specifically for the offspring of demons and humans. Each of the tenants of the mansion get a Secret Service agent assigned to them, and while the main heroine doesn't need nor want one, she gets an "agent", who seems to be utterly obsessed with being her obedient servant. The "butler" here looks and behaves very similar to Sebastian, albeit a lot more obedient and, um, clingy. His relationship with his master is very romantic and humorous, but still rather similar to the relationship between Ciel and Sebastian. If you want butler aesthetics, combined with a Shoujo romantic comedy, Inu x Boku SS got you covered.