The truth is, I'm not all that fond of Akemi Mikan - she's my least favorite character in Jitsu wa Watashi wa. But seeing the tables turned on her for once does kind of make her more likeable somehow (to a point). 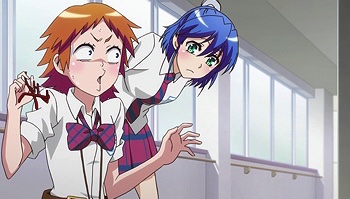 It's pretty late in the ballgame to start humanizing unlikeable characters. And if you ask me it's Akemi Mikan who's been the real demon in Jitsu wa Watashi wa so far, not so much Akane-chan. But I have to admit this episode did a decent job of rehabilitating the most psychotic osananajimi we've seen in ages. 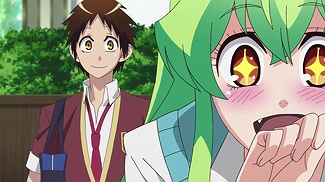 Let me say first off that I've been to one of those tabehoudai dessert buffets in Japan, and while the Japanese are neither the tallest or heaviest folks on the planet (obesity is remarkably uncommon, in fact) it's truly astonishing how much people can cram onto their plates at these things. The unspoken truth of the visit here is that Asahi's buddies used this as an opportunity to get Youko on a date with him without having to call it a date, and while she's naturally uneasy about chewing food in front of other people, for a teenaged girl in Japan (even a vampiric one) the lure of unlimited cake and sweets is too powerful to resist. 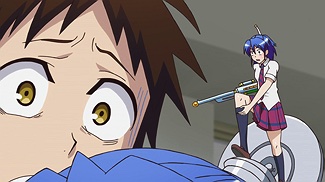 The date goes well enough more or less, apart from the fact that a sugar rush is apparently one of the things that makes Youko's wings pop out. Interestingly, Youko spills the beans to the trio that she's under the impression that Asahi is in love with Nagisa - which starts a theme of secrets being revealed that runs through the rest of the episode. The real premise for the dessert date, though, is for Akane to spot the group with Mikan (who works at the restaurant) and hatch the plan that sets off the craziness in the rest of the episode. 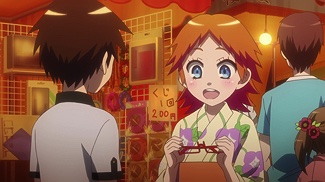 As usual, things quickly descend into an absurdist comedy of errors, but this time it's Mikan and her megane fukunokami that take center-stage after Akane steals them (presumably in full knowledge of what they are). Everyone's trying to get the glasses back from Akane and everybody's trying to protect some sort of secret from somebody (my favorite moment is when Nagisa emerges from her cockpit in an attempt to keep Asahi and Youko from finding out about Fuku-chan) but for once in this series, that will prove to be a losing battle. 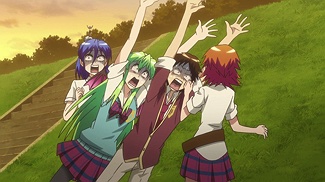 I'm glad Fuku-chan has a conscience, because Mikan sure doesn't seem to. The glasses know all, every embarrassing secret from Mkan's past (including a mahou shoujo period) - and they try and blackmail Mikan into being honest for once and revealing her feelings for Asahi. Fortunately for Mikan, Nagisa has a heart of gold, and she stops Mikan from putting her glasses on and pushing Fuku-chan to reveal the truth, but Jitsu wa Watashi wa is nothing if not a study in the law of unintended consequences, and when Nagisa puts the glasses on Fuku-chan says what she (he?) was going to say anyway. 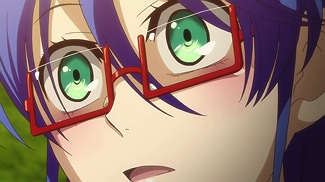 Did Fuku-chan know Nagisa was also in love with Asahi, or was it merely stating what it was going to say as Mikan anyway? In the end I suppose it doesn't much matter, because that's a pretty big cat out of the bag now. I don't think Nagisa has much plausible deniability at this point, so we may be about to see some confrontation of the truth in the next couple of episodes. The last piece of the puzzle is of course for Asahi to admit the truth to Youko - but every other secret that's revealed removes one more obstacle (or excuse) for him not to do so.

Meet the Characters of Blood Lad

The diverse cast of supernatural and human characters in the Blood Lad manga are brought to life in this anime adaptation. Take a look to learn more about them.