What Made Wonder Egg Priority Such a Special Anime, Part 1

Wonder Egg Priority is the first anime series created by hit television drama screenwriter, Shinji Nojima. It's an unique show imbued with the passion of its young team of creators. In this special interview, we asked the core staff on the series what made Wonder Egg Priority so outstanding.

Wonder Egg Priority is an original anime produced by CloverWorks, which aired starting January 2021 for a total of 13 episodes. Conceived and scripted by hit television drama screenwriter, Shinji Nojima, it became a hot topic. It shows the everyday emotional and complex feelings of several teenage girls and portrays their spirits through the popular, but harsh Egg World. Between the story and the lively and realistic action scenes, the series is still considered by numerous fans as a one of a kind. Join us for this in-depth article translated into English, first published by Febri in January 2022. 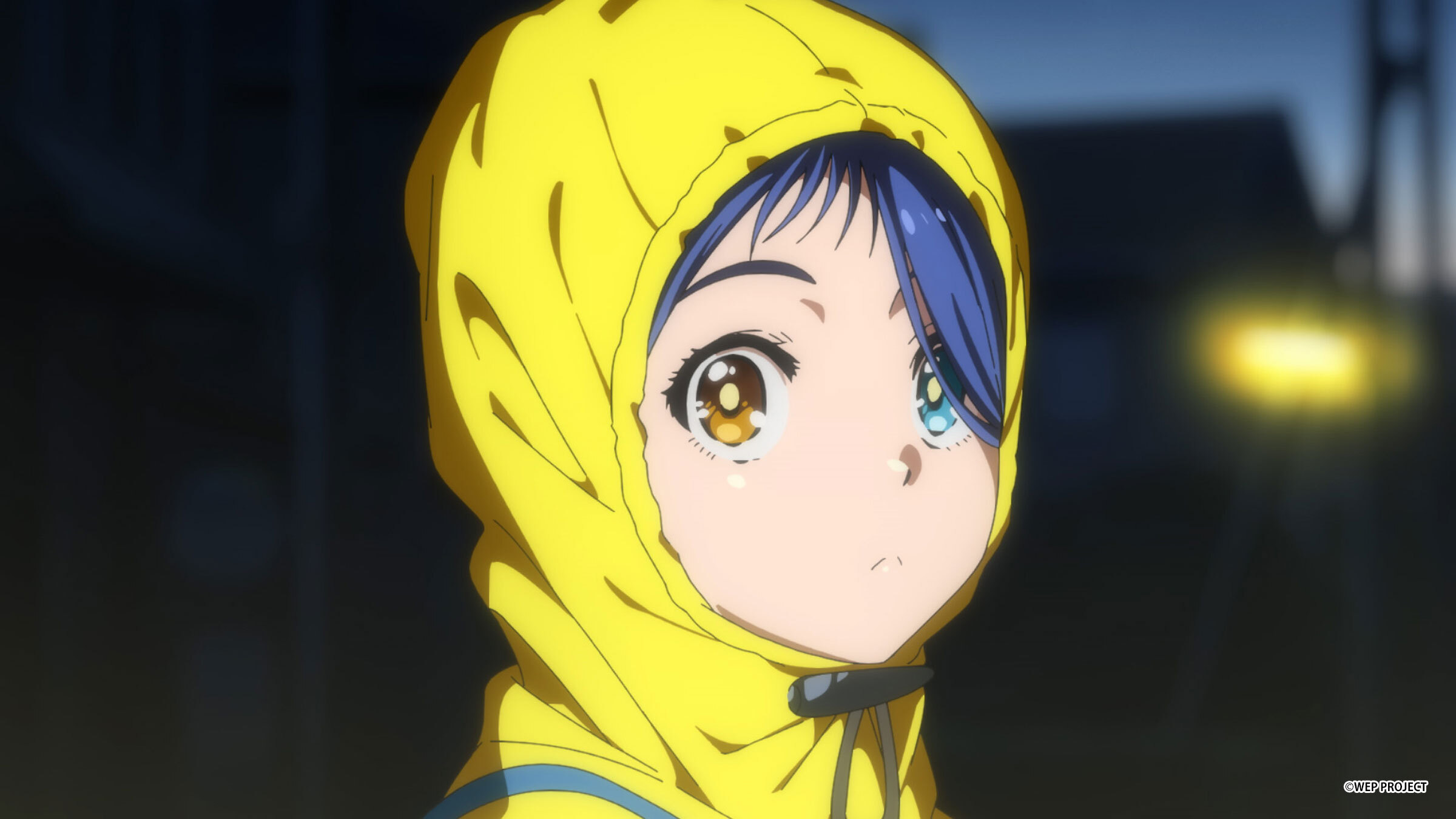 Wonder Egg Priority is the first anime conceived and written by Shinji Nojima, who is responsible for a number of hit television dramas that took the world by storm. Wonder Egg Priority is a scrupulously produced, richly unique film imbued with passion from its young team of creators. For this three-part series, we interviewed the core staff members to find out just what makes Wonder Egg Priority so outstanding. In this first installment, we spoke with Ms. Saki Takahashi, the chief animation and character design director, and Mr. Shin Wakabayashi, the director, about the characters' visuals.

A Background That Would Bring Characters to Life

It was Mr. Wakabayashi's first time working as a director on a TV series. Mr. Nojima sent him the script along with the declaration that he wanted to make "a documentary that would highlight how dramatic adolescence is for a young girl."

Wakabayashi: I understood that he wanted the characters to take on a life of their own. I knew that I could explain it beautifully, if the story was solidified with logic, but that wouldn't be interesting enough. At first, I drew the characters much too simply and went overboard with their dialogue and portrayals. I consulted Mr. Nojima and he said, "Make them feel detached enough that you don't know what they're thinking. When you break free from conventions, that's when really intriguing stories come about.' I was also thinking that I didn't want to create something conventional, so I kept persevering. 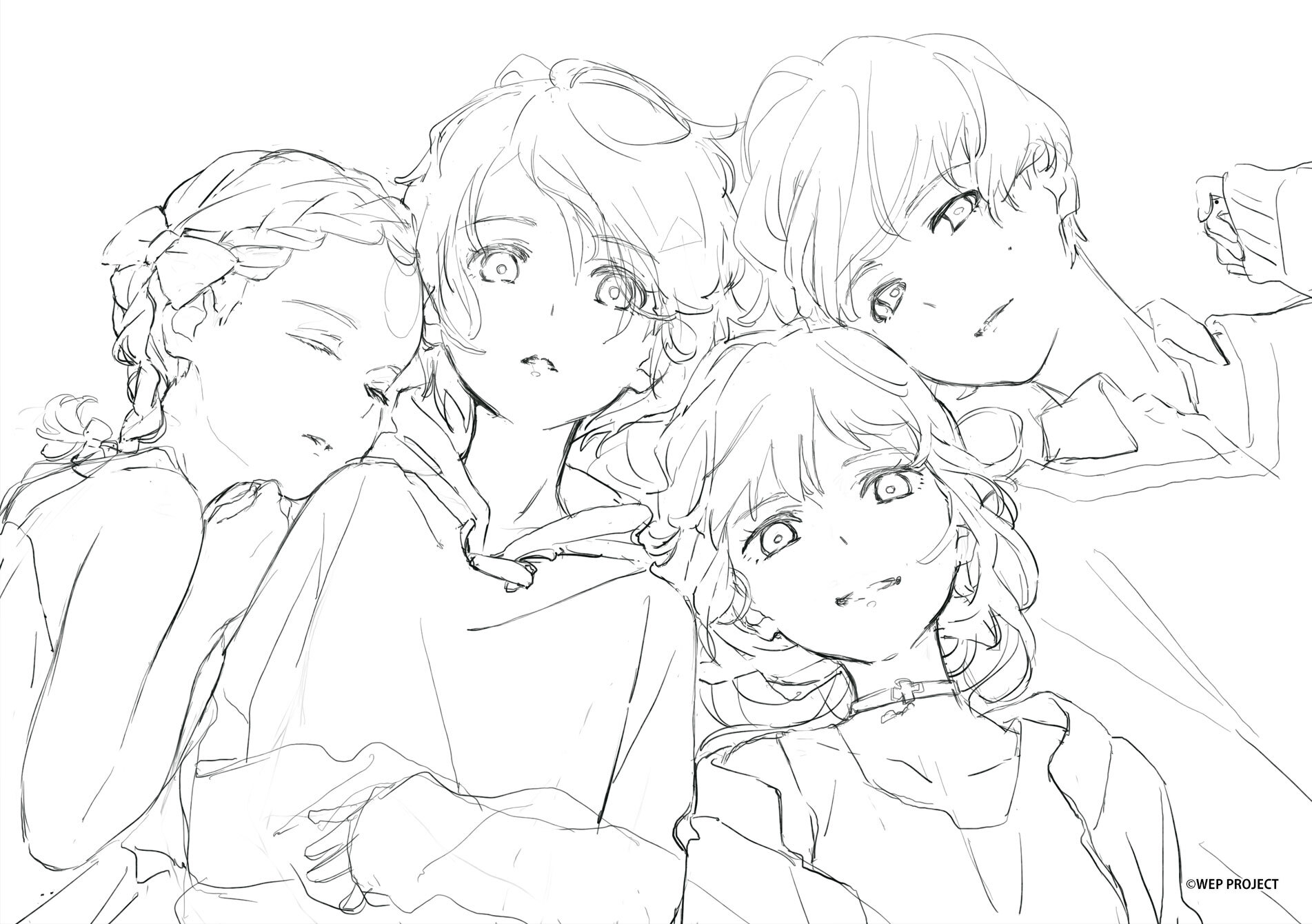 The first thing they worked on was character creation. They had already had Mr. Nojima's original outlines, but there was a lot of information missing, almost as if he were testing the directors. They knew they needed to make the characters full of life in order to create a captivating drama. The staff in the studio created the character stories and direction by drawing up detailed backgrounds for the characters, including their personality traits, family situation, special skills, hobbies, and favorite actors. 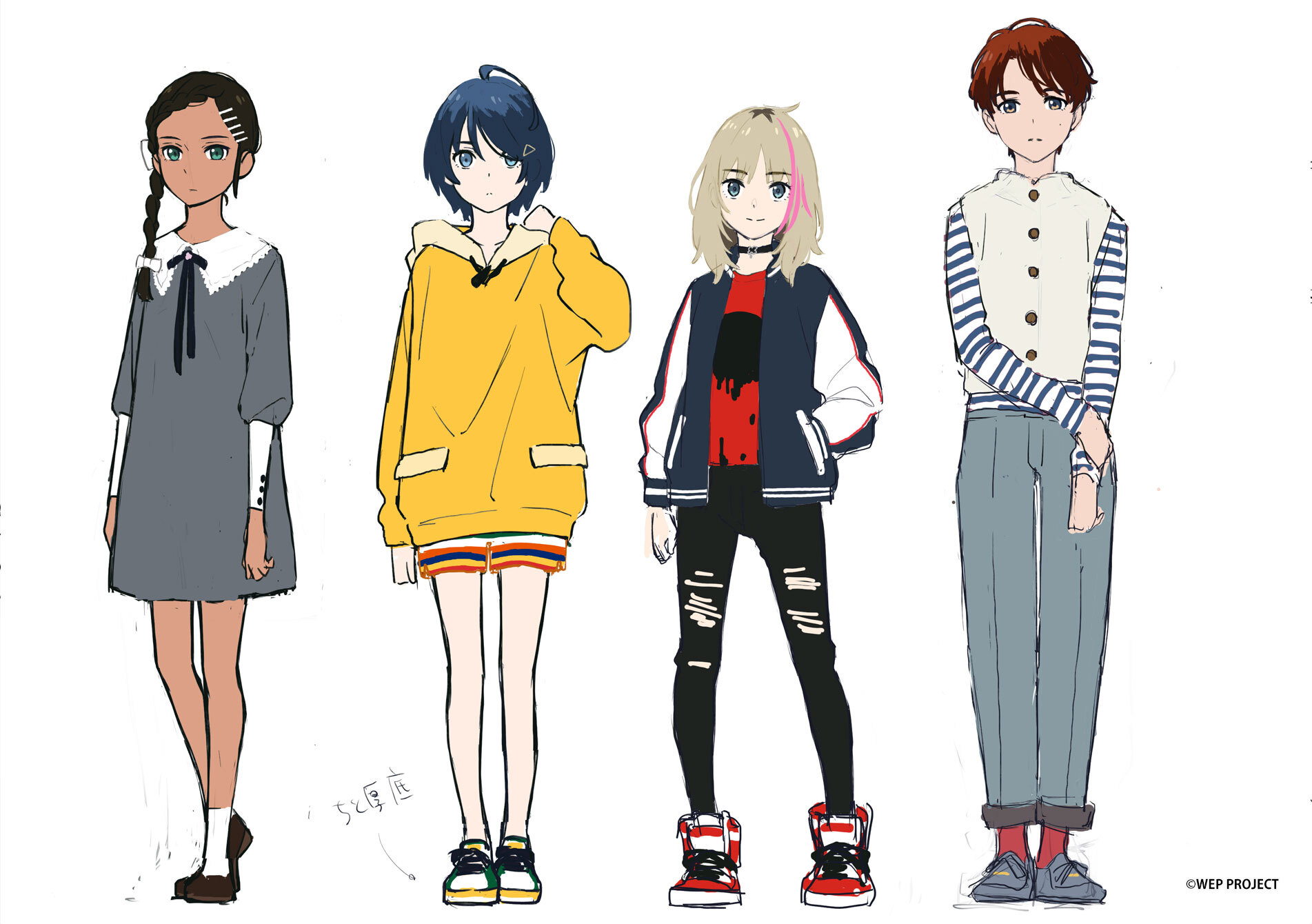 Wakabayashi: We kept asking various staff members, "Do you think this character would say such-and-such?" and if even a few of them said yes, we'd press forward with that idea. We just felt it out like that. Even in real life, you can't explain everything about someone with clear logic, and personally I like characters who can be a bit crazy at times. The important thing was considering how we could leap beyond that. Once we started thinking outside the box, we really felt like the characters had come alive.

Capturing the Characters' Essence Without Relying on Superficial Aspects

Once it came time to start on the character design, Mr. Wakabayashi selected Ms. Takahashi.

Wakabayashi: When I saw Ms. Takahashi's rough drafts, hers were the first where I thought, "I bet if she drew these characters, they'd be really captivating."

Although still young, Ms. Takahashi had distinguished herself by previously working as an animation director on anime such as Darling in the Franxx and Sora no Aosa wo Shiru Hito yo (Her Blue Sky). She joined the industry with aspirations of being in charge of character design on an original animation project.

Takahashi: I really loved shows like Revolutionary Girl Utena which portrayed a young girl's emotions and her strength in battle. I thought this would be an interesting project because I was drawn to the way Mr. Nojima highlighted both the darkness in humans as well as their innocence. I was excited to join the team because the idea of working on an original project no one knew the ending to, and seeing the upstream process of character design, was very appealing to me.

The character creation process revolved around Mr. Wakabayashi, Ms. Takahashi, and animation producer Mr. Shouta Umehara, and began with the protagonist Ai Ohto. At first, Ms. Takahashi focused on Ai's identity as a hikikomori and drew her expressions very dark, but Mr. Wakabayashi said, "Although Ai ended up as a hikikomori, ultimately she's a girl who's very curious and interested in many things." He thought it would be best not to rely on superficial character attributes. After that, he and Ms. Takahashi had discussions where they compared their opinions to bring out Ai's fundamental cheerful disposition. 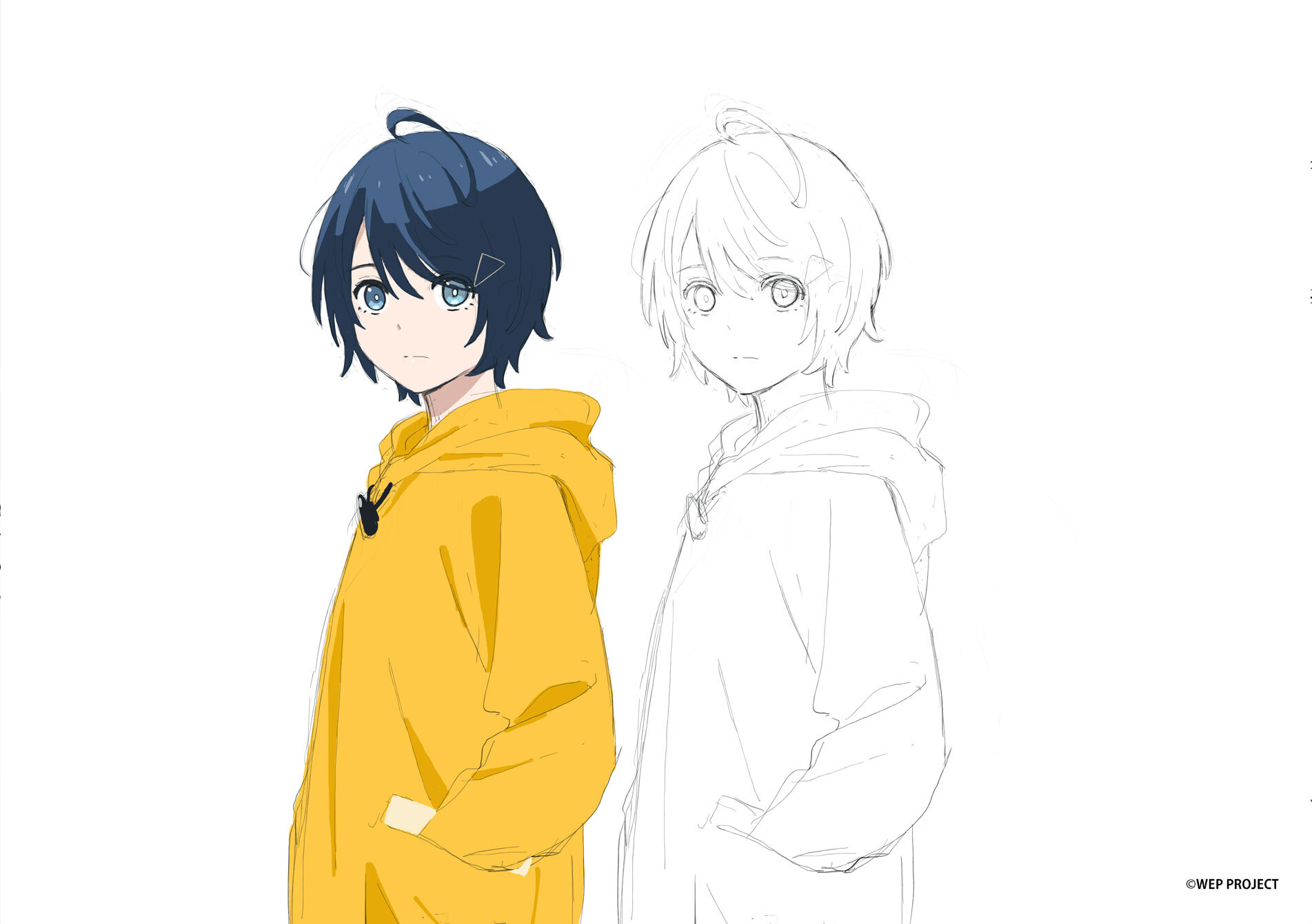 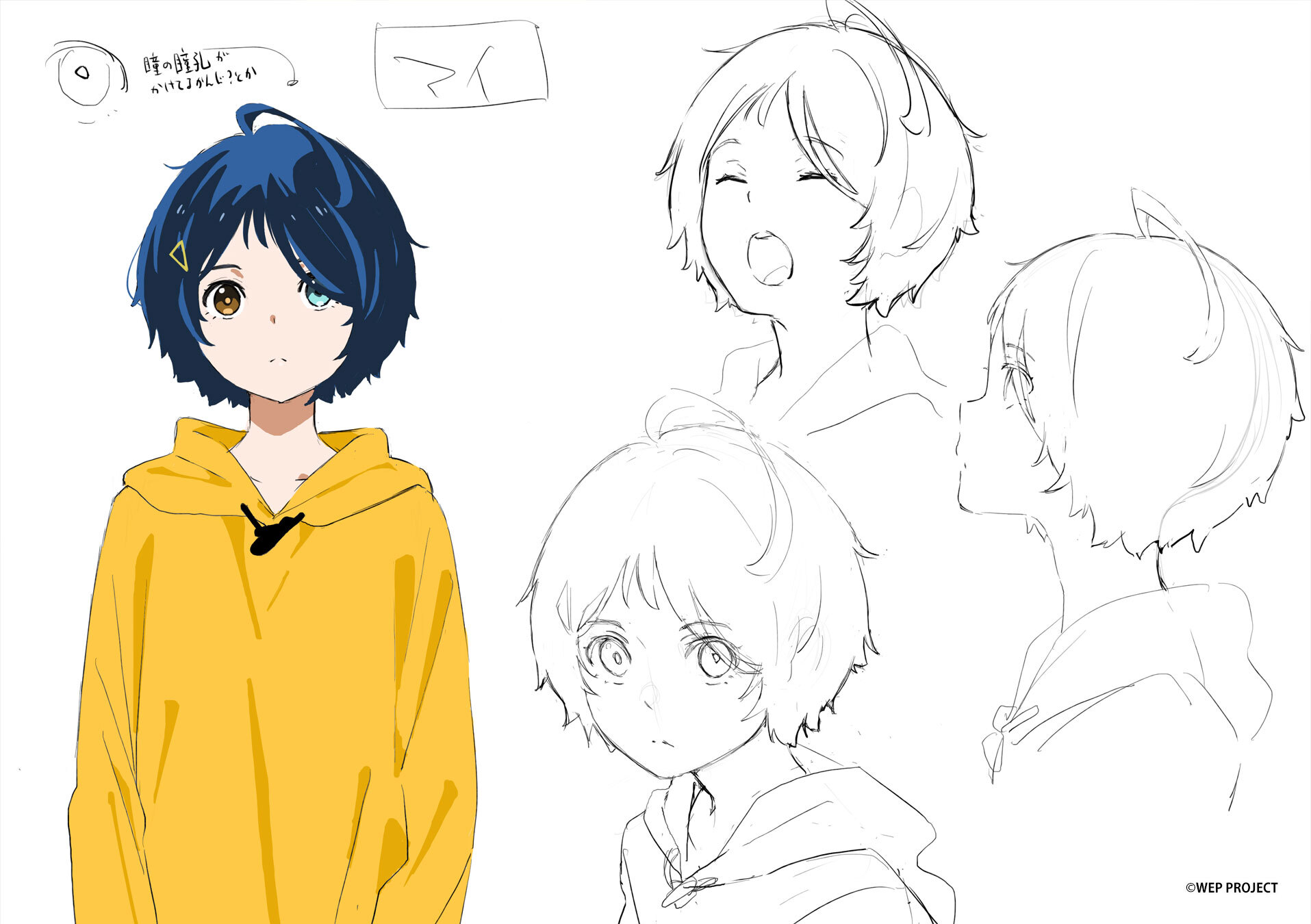 "Ai has a lot of hair but wears it in a kind of sloppy hairstyle. I portrayed that through the fullness of her hair's silhouette and the way I used heavy shading." —Saki Takahashi

One of the special elements of the show's character design was making outfits worn by the characters seem realistic. Mr. Wakabayashi firmly believed that the characters' clothing shouldn't just be a decoration as part of the design, but instead act as a very important part of expressing that character's personality.

Wakabayashi: It's fun to use clothing to show what kind of traits a character possesses. In fiction, it's the easiest method of self-expression. Being fashion-conscious means you keep up with trends. But that's not the kind of character Ai Ohto is, so Ms. Takahashi and I were very conscientious of what kinds of clothes Ai would wear. 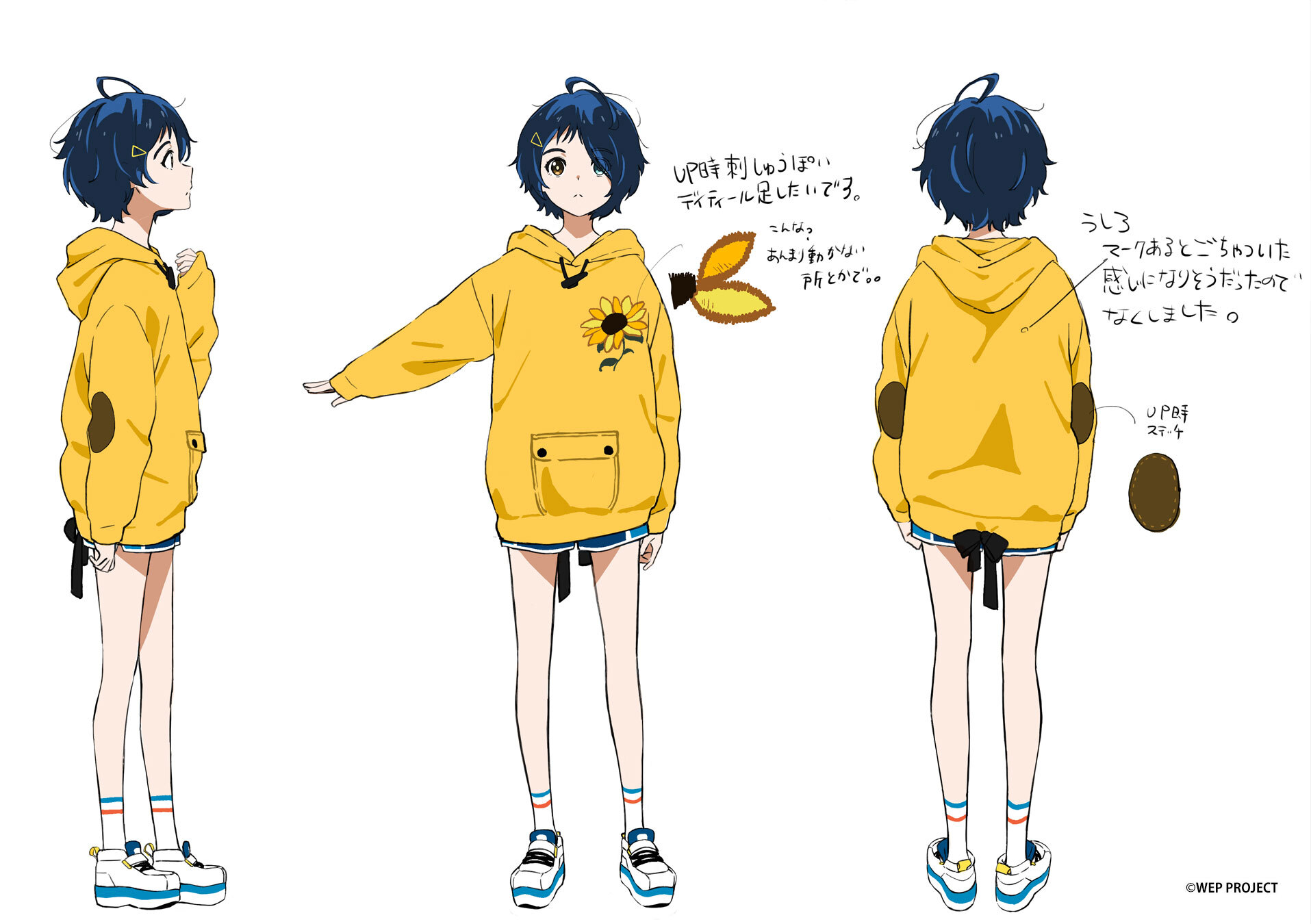 "Mr. Wakabayashi was very concerned with the clothing, right down to the fabric it was made from. It was really fun creating the outfits, though, almost like playing with paper dolls and saying, 'Hm, I wonder if she'd look good in this outfit?'" Ms. Takahashi said with a laugh.

Interviewer/Author: Akiyoshi Hizume
Translator: Sarah Tangney
Interview was conducted in Japanese and has been edited for clarity.

Tired of waiting for the English release to catch up to the Japanese chapters? All the series in this article are simulpublished in English on Global Book☆Walker!