MyAnimeList is thrilled to launch a new service that allows members to legally read manga for free, giving them the freedom to discover new manga gems and reread old favorites. This new Free Manga service releases a new free chapter each week; after a certain time period, the first few chapters of the series will be free to read permanently. The number of free chapters is unique to each title, so some chapters may be free for a limited time and never again, so make sure to read every week so you don't miss anything important. While there are only a few titles available on the Free Manga service at the moment, the catalogue will eventually grow to include over 300 chapters from various titles and more publishers.

Check this out at https://myanimelist.net/read/manga

In no particular order, here are the first few titles to participate in this new free service:

Little girl wanders around in nature with her adopted golem father-figure, a.k.a. Somali to Mori no Kamisama (Somali and the Guardian of the Forest) 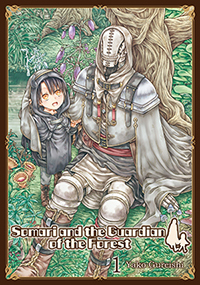 Somali and the Guardian of the Forest is a heart-warming story of inter-species adoption and family with the right amount of cute-kid hijinks. The titular Somali is abandoned in a forest and found by the forest's golem caretake, who takes Somali under his wing. Their relationship is adorable and incredibly sweet, though not without miscommunications, and shows that family is family no matter how it comes into being. This series has some truly gorgeous art that is very intricate and detailed, and that perfectly suits the fantastic (and possibly post-apocalyptic) world this takes place in. Overall this series is quiet but captivating. An anime adaption will be released in January 2020 and stream on Crunchyroll.

High school student has daddy issues, responds by trying to become the strongest in the world and getting RIPPED, a.k.a.
BAKI: New Grappler Baki (BAKI) 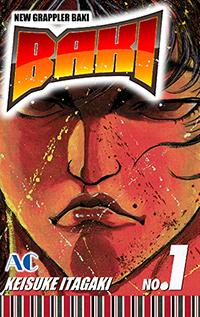 With a distinct art style and an incredibly attention to details, it's easy to see that BAKI was written by someone who really loves and has been directly and deeply involved with martial arts. That being said, this series is not for everyone, given the incredible and often gruesome violence that occurs as BAKI fights to defend his title, himself, and his girlfriend. Netflix released the first season of the anime adaption in December 2018 and the second season in March 2019. Highly recommend this for people who love martial arts or fighting manga. 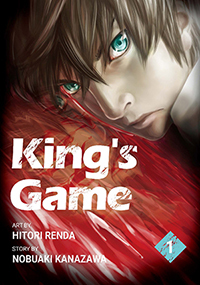 For a gripping story with lots of unexpected twists, King's Game is the series for you. What starts off as an a seemingly harmless game dictated by a mysterious "King" quickly escalates when the students who don't follow the increasingly difficult orders end up dying. The protagonist, Nobuaki, can be a bit naive at times, but his faith and optimism gives hope to his classmates and makes him a natural leader that readers can root for. The art is nice and fits the story with expressive yet clean lines, but the body count and storyline make this story for older teens and adults. Fans of Death Note and The Love and Creed of Sae Maki would probably enjoy this.

Prince prophesized to save country because of his weird eye, but just wants to read instead of save the world in Ten Prism (The Tenth Prism) 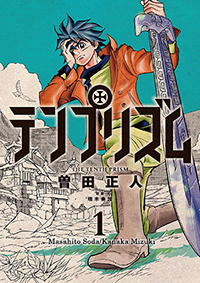 Prince Tsunashi has a heavy burden: he has grown up hearing of a prophecy that says he will save the Kingdom of Karan from the invading neighboring country Guu, but all he wants to do is read. (Honestly, relatable.) With a distinct angular art style and characters that readers can empathize with, this series takes place in a fantasy world just similar enough to be comfortable but different enough to be exciting. While the premise of this series (a child is destined to save the country) has been done before in several iterations, this version has its own unexpected twists and turns in the first chapter that leave readers wanting more. Unusual for manga, this series is available in full color, in addition to the usual black-and-white.

Woman pretends to be her late mother to save her family; ends up marrying her half-siblings' half-brother (love is complicated) in Daifugou no Akunaki Ai (The Legacies Of Powerful Men #1: Ravelli's Defiant Bride) 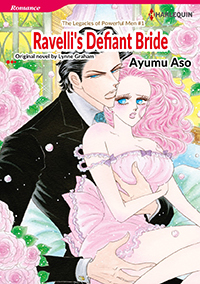 Ravelli's Defiant Bride is a classic romance novel, just with gorgeous art that primarily consists of long flowing lines, lots of sparkles, and the shojo-typical small heads and huge eyes. The plot moves a bit fast and has some rough transitions, but it covers the main points well enough, considering it condenses a 250+ page novel into roughly 130 pages of art. (Plus, what romance story hasn't moved a bit fast at times?) The story leaves readers happy with how this couple turned out but curious about the other characters (presumably the brothers are the main characters in #2 & #3 of The Legacies of Powerful Men). Kudos deserved for having the main female have actual useful knowledge and skills, especially in economics and business! Perfect for any fan of romance novels and happy endings.

2017 is a new year for a fresh start, but what if you could blast back into the past for a brand new start? Here are 6 great manga series that are about starting all over again from the beginning!

[Manga Store] Recommendations from the Editor #1

2018 marks the opening of MAL’s official Manga Store! Now open to over 30 countries around the world, be sure to check it out!

MyAnimeList is excited to announce the addition of The Island of Giant Insects to its Free Manga reading service.