They've met before when Goku was just a little kid. After being paralyzed by General Blue of the Red Ribbon Army and about to be made into a shish kebab, Arale saves Goku's life by head butting the evil General to...Egypt. She headbutts him all the way to Egypt. 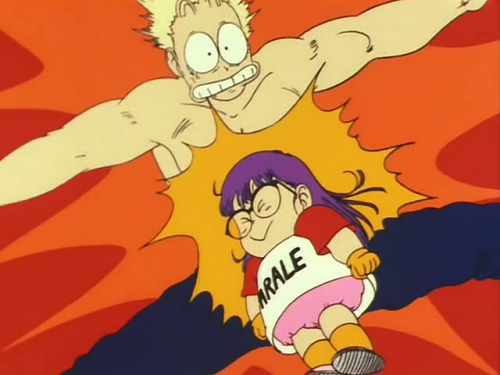 Now, almost 30 (real time) and 40 (anime time) years later, they're set to meet again - this time supposedly in conflict - in the 69th episode of Dragon Ball Super, titled 'Goku VS Arale! The Earth Comes to an End Due to Their Battle?'.

With the Future Trunks arc at a close, and a new arc set to take place from the 27th of November, you've got to wonder where Arale fits into all this. More than likely she'll just make a single episode cameo - but it'll be her most significant turn in the Dragon Ball universe since her dalliance with General Blue and role in the Dragon Ball: Mystical Adventure movie.

Most recently, she did make a brief, 10 second appearance in Dragon Ball Super after Goku loses control of his Instant Transmission technique and finds his way into Penguin Village. It's really cute.