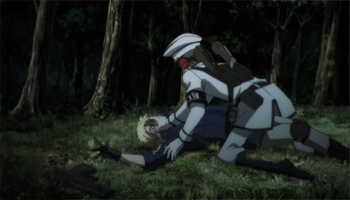 In this episode of Aoharu X Kikanjuu, Masamune and Midori finally face off in the battlefield. This is a moment built up heavily by the show, as previous episodes explore the history between the two and Masamune waits for his chance to get revenge on Midori. Masamune's team even joined the Top Gun Tournament just to take on Midori, and the moment is finally upon them. Unfortunately, instead of an awesome showdown between two bitter rivals, the fight is one-sided as Midori outclasses Masamune on every turn. The fight didn't last long, and Masamune spent most of it lying on the ground after the physical beating Midori hands him. It wasn't just Masamune that got slapped around by Midori, even Toru felt Midori's incredible skill. Ten minutes into the show and two members of Masamune's team are defeated, and Midori did it by himself. The fearsome part is that he only drew his gun once during both fights. He defeated Masamune and Toru, who have been training the past year just to defeat him, effortlessly. It illustrates just how big of a gap there is between Midori and Masamune's team. After the one sided beating of Masamune and Toru, Midori readies himself to take on Hotaru. 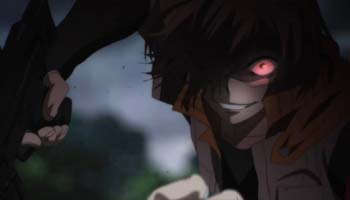 The show hinted that Midori would be a heartless demon if he unmercifully reveals Hotaru's secret to her teammates, but Masamune and Midori leaves the battlefield before Hotaru can fight. One of the show's main story arc is her secret and its inevitable revelation, but it seems they want to sit on that for now and reveal it a later time. Its exclusion meant the face off between Midori and Hotaru lacked a certain flavor, until the show utilized the other plot point it's been putting in the sidelines until now: Hotaru's bloodlust. She has a sense of justice that motivates her to punish bad people, and she also get a twisted enjoyment hunting her opponent like prey. After seeing Midori act like a bad guy, her sense of justice and bloodlust comes out which makes the face off one of the show's most memorable moments. Survival games are a team sport though, and Hotaru didn't have her team behind her like Midori does. It is that factor that caused Masamune's team to lose the first round of the TGC battle. Hotaru feels ashamed because Midori made her realize her sense of justice is contradictory. She is the biggest liar of all that should be punished since she didn't tell her teammates her real gender. It looks like this secret will be revealed in another way, but the situation becomes complicated when Hotaru has to tell her teammates herself, instead of Midori forcing the truth out. She'll have to prepare herself for that. 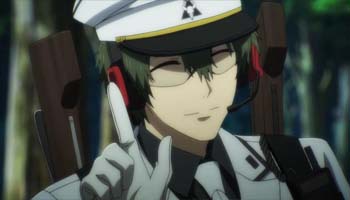 Midori is as fearsome as you'd expect, since he didn't even use his gun when he fought Masamune. He even happily strolls the woods and looks at mushrooms while Masamune attacks him. He isn't worried one bit, and even demonstrates how monstrous he is when he physically beat down Masamune. Midori is a sadist because of how he "killed" Masamune. He covers Masamune's mouth to prevent him from screaming, and then fires multiple shots at close range. A BB pellet hurts a lot, and having the airsoft gun pressed down on your skin and fired will leave some nasty injuries. Midori completely humiliated Masamune by not only using his opponent's gun to "kill" Masamune, but also making sure it would hurt a lot. He makes sure his opponent's defeat is something they'll remember forever, and this makes him such a scary individual. This is also the reason why he only taunts Hotaru with her secret, instead of revealing it to her teammates. He wanted Hotaru to experience the humiliation of defeat first, then add insult to injury by pointing out she's a hypocrite for lying to everybody despite her belief that bad guys should be punished. Midori made her realize she is a bad guy herself. 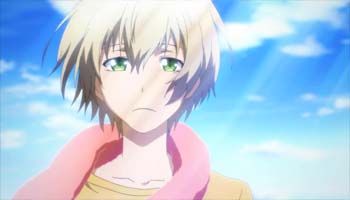 The TGC story arc ends here, and it looks like Hotaru's secret will be a focus for the next one. They might still do a time skip and end the show with Masamune's team defeating Midori's team in the next TGC, but the secret will plant conflict within Masamune's team first. 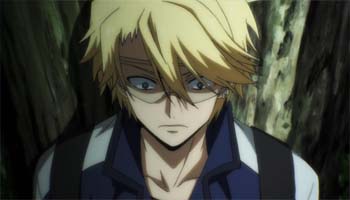 The identity of the previous female member of Masamune's team is still a mystery, but she might still be introduced if the show does focus on Hotaru's secret for the next story arc. She might just be a plot device though, and the show might end without her appearing. It would be better if she does, because Masamune also needs closure from when she left the group. He's hung up on getting revenge on Midori, but it all stems from her leaving the group.