Vocaloid virtual Idol Hatsune Miku has fans across the world and this week we put the best and most interesting right under the spothlight!

Long before Tupac’s hologram first appeared, Hatsune Miku took the stage. The hologram version of Hatsune Miku appeared at Animelo Summer Live at Saitama Super Arena on August 22, 2009. The voice of Hatsune Miku, a fictional character - voiced by Yamaha Corporation’s Vocaloid 2 and Vocaloid 3 using synthesizing technologies with Crypton Future Media's Piapro Studio, a singing synthesizer VSTi Plugin - was used in the creation of over 100,000 original songs. Miku, who is portrayed as a 16-year-old girl with turquoise twin-tails, has captured the hearts of millions of fans and it is no wonder that she has so many awesome figures! We are here to look for the coolest and cutest of them all. The first figure to take the floor comes from the Good Smile Company as a part of their Nendoroid figure line. This Nendoroid Hatsune Miku figure is a part of Good Smile Company’s first ever set of lottery-based products. This figure could only have been won during the Winter of 2012. The Hatsune Miku figure is a special Jumbo Winter Ver. that is 30 cm (11.7 inches) tall. Yukiwo Ageta sculpted this figure in cooperation with Nendoron. The figure itself is a pre-painted non-scale articulated figure made from ABS and PVC. She comes with a translucent stand. To own this cute figure you will need roughly 10,620 yen (~ 95 US). On our second spot we again have a Hatsune Miku figure from Good Smile Company. This time we have a rendition based on Haruyo’s illustration which he did in celebration of the Deep Sea Girl song from Yuuyu-P being selected as one of the songs in the Million Saisei & EXIT TUNES PRESENTS vocaldream album. This 1/8 scale PVC figure depicts Miku at the bottom of the sea sitting on a coral with her hair swaying in the ocean currents. Iwanaga Sakurako is the sculptor responsible for this 16 cm (6.29 inches) tall figure. This figure was released in May 2014. You can add this figure to your collection for only about 36,900 yen (~ 330 US). Next we have a Hatsune Miku figure from Sega that was just recently released in March 2016 but it is too good not to include. Here we are talking about the deluxe edition of the Honey Whip version. With this package you get everything from the standard version plus more. This is a fully poseable 30 cm (12 inches) tall figure with real cloth outfits. Two outfits are included in this package. The first is the 'Honey Whip' outfit from Project Diva F that was designed by Saitom and the other is the 'Supreme' outfit from Project Diva F 2nd designed by Redjuice. Costumes were produced by Akimoto Mieko while the sculpting was done by PERFECT-STUDIO. Inner lingerie is included too. You will also get additional head parts like a face with both eyes closed, a winking face and a sad face. Multiple hand attachments are also included. You will also get a stand for this amazing Miku figure which can be yours for only about 39,565 yen (~ 356 US). We have come to the penultimate spot of our list and once again we have an awesome figure from Good Smile Company. This time we have a figure that perfectly represents Miku from her song 'Love is War'. The song was produced by supercell and the illustrations were done by Shirou Miwa. This figure looks like it just stepped out of the music video. Miku is standing on a giant speaker platform leaning over the railing shouting out her love through the megaphone. The figure is powerful and dynamic which goes nicely with the theme of the song. The figure is a 1/8 scale completely pre-painted PVC figure. This figure is approximately 28 cm (11 inches) tall and the stand’s measurements are approximately 40 cm x 31 cm x 23 cm (15.74 x 12.20 x 9.05 inches). Good Smile Co. released this Iwanaga Sakurako sculpted figure in January 2012. To make this figure a part of your collection you will need about 55,900 yen (~ 500 US dollars) on the secondary market. 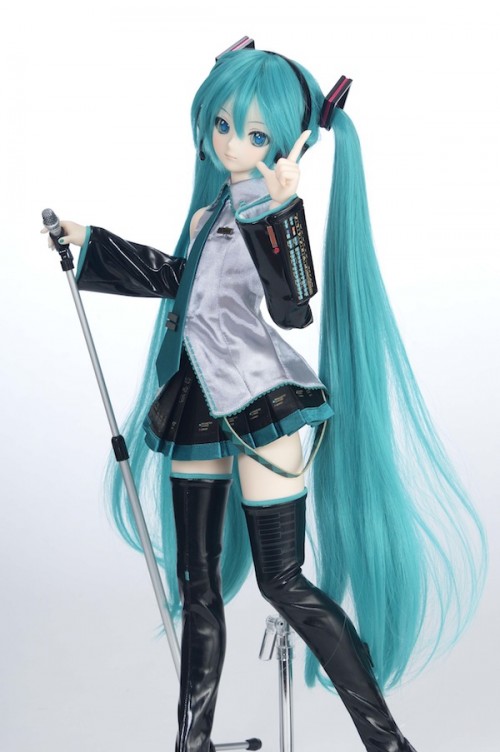 And on our first spot we have a Dollfie Dream masterpiece. This Dollfie Dream rendition of Hatsune Miku was released in September 2015. The outfit is made from real fabric and the figure was based on a design by iXima and Misaki Serika from Zoukei-mura sculpted this figure and brought it to life. The body of this figure is a soft vinyl Dollfie Dream Base Body III with semi-white skin and SS bust. Her head is 'Hatsune Miku' original with the same type DD size special wig. Her eyes are 22mm Metallic Dollfie Animetic Eyes with 'Hatsune Miku' design. This figure also comes with a lot of goodies which include a headset, a necktie, a necktie pin, a blouse, arm covers, two decoration parts for arm covers, a skirt with a belt, panties, boots, a normal left hand, paper, an outspread right hand, a special decal, and DD skin protect tape (semi-white). Also of note is the figure's size, with its height of 60 cm (23.4 inches). This figure will surely take a center stage in your collection and capture the hearts of all who gaze upon it. To own it you will need about 83,370 yen (~ 750 US).

And once again we arrive at the bittersweet end of this weeks Five Figure Fridays. We hope you enjoyed and found some new figures that will be an excellent addition to your collection.