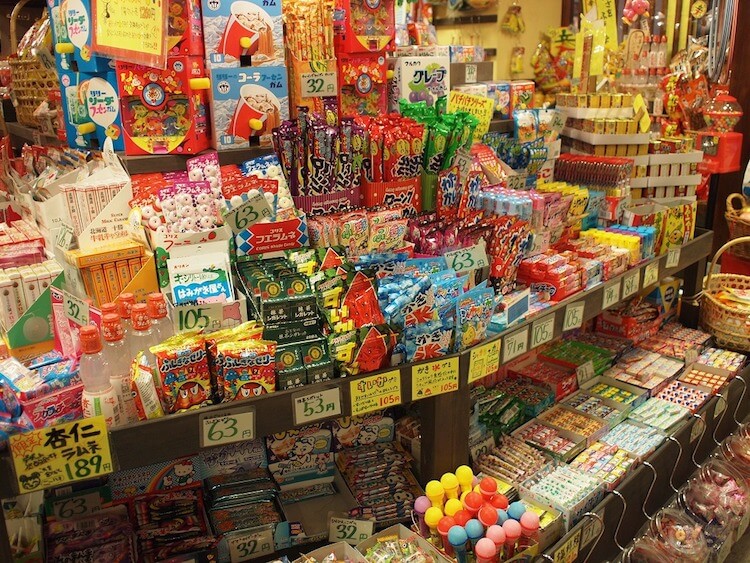 Almost all these snacks are under a dollar. (source)

Those who have watched the Winter 2016 anime all about dagashi know that they are sweet or savory cheap snacks. As can be seen in the anime, dagashi are very nostalgic for Japanese people, much like how 90's snacks like Gushers or Ring Pops are for Americans. They're tasty and cheap for sure, but the chief reason people still buy them is nostalgia for "the good ol' days."

Because they are so cheap, dagashi are made with the cheapest of ingredients, including corn, soy, and lots of artificial flavoring. Many of them have cute mascots to market them.

Like Cracker Jacks, an old American snack, it is not uncommon for dagashi to be packaged with small, cheap toys.

The History of Dagashi

The term dagashi, meaning "low-grade snacks," has existed since the Edo Era (1600s-1800s), though the dagashi you see in Dagashi Kashi and in Japanese stores hail from the post WWII period onward.

White sugar was expensive back then, so in order to differentiate expensive candies made with sugar, and cheap candies made from corn syrup and millet, they had different words for them. The Kansai area also had a different word for dagashi, zatsugashi, which means "crude/miscellaneous snacks."

Just because post-WWII dagashi has become popular doesn't mean that truly traditional dagashi are gone, however. You can still find Edo-style dagashi everywhere.

Note: you won't find famous candies like konpeito (the star shaped candies in Spirited Away) here, because konpeito is made with refined white sugar, and was extremely expensive back in the day.

This is not an exhaustive list, but some of the perhaps more popular types of traditional dagashi that can still be purchased today. Most of these products are not made by specific brands; and refer to the type of snack rather than the specific product.

The word nanban comes from the archaic derogatory Chinese phrase for Southeast Asian tribes, but in Japan now means anything foreign, especially Western European and Southeast Asian. Fun fact: Chicken nanban is a fried chicken dish covered in tartar sauce, and is nothing like nanbangashi.
Nanbangashi is not actually a specific snack, but refers to any Japanese snack that has its routes in European confections. Nanbangashi specifically generally stem from Spanish and Portuguese sweetsmaking styles that spread to Japan starting with the missionary Francisco de Xavier's stay in Japan.

The word "karumeyaki" can be traced back to caramelo, Portuguese for caramel, with "yaki" being Japanese for anything from "grill," to "bake," or "fry." It's a popular method of candymaking internationally, and you might know it as honeycomb candy, sea foam, or sponge toffee, depending on where you're from. They look almost like cookies, but their ingredient list is much smaller: sugar, water, and baking soda!

These little pretzel/cheeto hybrids taste nothing like either savory snack. Karintou are traditional Japanese dagashi made from flour, sugar, and brown sugar, and are deep fried. Karintou, especially the popular dark brown sugar variety, are crunchy and taste highly caramelized, to the point where they're slightly burnt. They've been around in Japan since the mid 1800s, though it's debatable where their origins lie. While there is a traditional Chinese snack that looks extremely similar, there is another theory that karintou stem from the Spanish confection pestino. 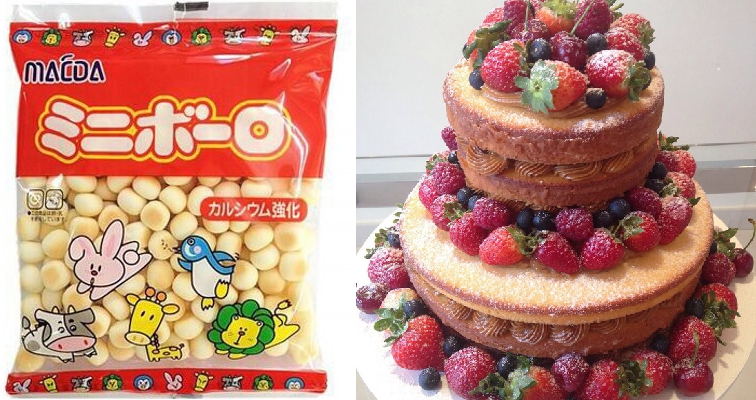 But what do tiny little pellets have to do with cake? Actually, booro is another type of dagashi/nanbangashi that is inspired by Portugal. After tasting Portuguese bolo cakes, Japanese confectionists used wheat, buckwheat, or potato flour to form these little mildly sweet, melt-in-your-mouth snacks.

The name kurobou literally means "black bar." How appetizing! These small cakes are made from brown sugar, flour, eggs, and baking soda, and are baked in an oven. It is thought that they are most similar to the Italian biscotti, but the origin of these snacks are unclear. Unlike biscottis, they are slightly chewy, and like several of the other dagashi so far, taste like brown sugar.

Unlike the other snacks, sukonbu does not come from a foreign food. Few Western countries can imagine eating pickled seaweed as a snack, but Gintama's Kagura loves it! This particular brand is Miyako Konbu.

This is the moment you've all been waiting for: the dagashi you see in Dagashi Kashi! We won't cover all of the snacks that Hotaru fangirls over in this article. You can always watch the anime for that, right? 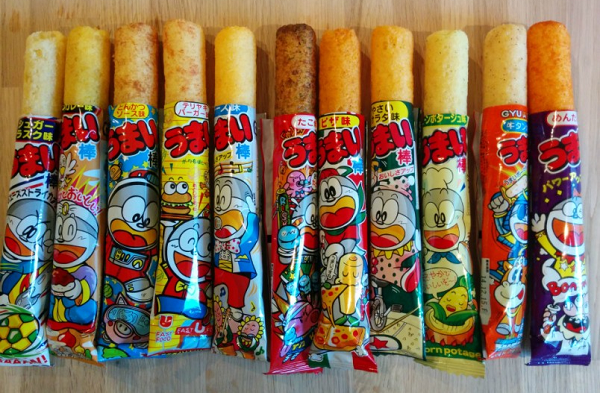 Probably the most famous of all dagashi, Umaibou is beloved in other parts of Asia as well! In fact, I grew up eating it, as it is readily available in both Asian supermarkets in America, as well as in China. Umaibou are basically giant cheetos puffs, but even airier, and currently come in 20 or so flavors. Thirty three flavors have been discontinued, ranging from sweet green tea flavors to savory international "kimchi pork" flavors! The standard retail price for a single Umaibou is an impressive 10 yen (less than 10 cents).

Anyone who's watched Grave of the Fireflies will recognize this iconic candy. During WWII, Sakuma Drops were Setsuko's favorite snack, and thanks to the hit Ghibli film, Sakuma Drops have become famous worldwide. It seems that others seek to profit off Sakuma Drop's popularity, as some questionable novelty flavors exist. (It's hard to read, but the top left box contains "chocolate banana crape" flavored candies.

This, my friends, is a package of lies. You expect katsu, a delicious fried meat dish, but instead you get a fishy, flat rectangle with the texture of an Air Head.

It's definitely worth a try for the novelty of it though, and at around 35 yen a pop, you're not losing much if you dislike it.

This snack was posted on MyAnimeList's Instagram. They even ate it how Hotaru reccommends: all four at once. Potato Snack and Potato Fry are two brands of chips that come in tiny, cheap packages, and are super flavorful. It seems that Potato Snacks are sadly discontinued.

True to its name, Super BIG Choco is the titleholder for Japan's longest chocolate bar. Although I'm not sure if you can call it a chocolate bar, seeing as the inside appears to be entirely puffed rice.

The best candy to annoy your parents with, flute/whistle candy is a food you can and should play with. While the Japanese dagashi are shaped like lifesavers, the Spanish candy maker Chupa Chup's Melody Pops are also sold in dagashi stores, making them foreign dagashi.

Not quite so cheap outside of Japan due to both import costs and the novelty factor, ramune is perhaps one of the most famous dagashi! The name ramune comes from a rather inaccurate transliteration of lemonade, which is commonly called remoneedo in Japanese.

For more dagashi fun, definitely watch Dagashi Kashi, and perhaps check your closest Asian Supermarket to see if they carry any of these snacks! If you don't have one near you, consider things such as snack exchanges or monthly subscription boxes!