There's no anime this season as absolutely baka as Jitsu wa Watashi wa. It just does whatever the heck it wants and doesn't give a damn. Thank goodness! 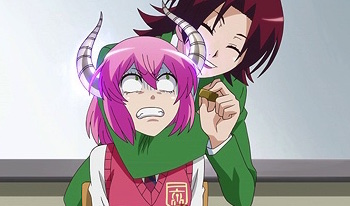 While Jitsu wa Watashi wa has already set a pretty impressive standard, that had to be one of the most gloriously stupid 22 minutes of anime I've ever seen. It was like a hit-and-run accident - I feel like the show just rammed into my car and didn't even bother to leave a note. 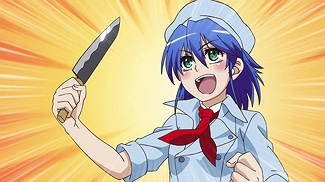 I honestly have no idea if there was any conscious attempt to parody Shokugeki no Souma in either the anime or the manga - obviously the curry thing is pure coincidence - but it certainly adds an extra layer of comedic flavor to what went on in this lunatic episode. I must confess when Akane-chan tasted Nagisa's chocolate cake, it was hard not to make the mental connection. 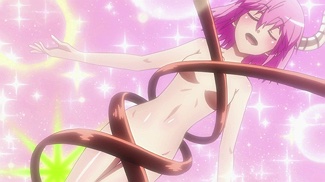 But parody or not, this episode was just plain hilarious. The key thing is that there was no real effort made to explain or justify anything - it was just pure tomfoolery, steadily building to the montage at the end. It all starts - fittingly - on a purely random note, Akane ordering the four heroes to make curry. It really felt like it was just the mangaka saying, "I think this would be funny" and running with it. And boy, was he right. 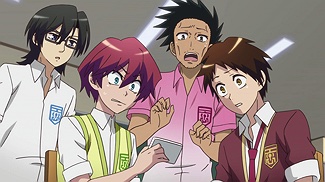 Of course, everyone knows you can't have a good cooking story without an asteroid about to destroy the Earth. Akane provides us that pretext, too - it's her way of threatening the humans into supplying more of Nagisa's chocolate - but it turns out controlling a giant asteroid requires all of her concentration, which Akari-sensei (who I'm really starting to like) uses to her full advantage. 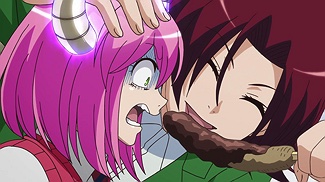 There's all kinds of stuff going on against this backdrop, including Shiho doing improper (in more than one sense) things with a banana and lots of shots of the world coping with an onrushing doom that seems to change directions at will for no good reason. Mikan weighs in too (I'd forgotten about that whole God of Fortune thing), on the receiving end of a troll job for once - though fortune puts her in a position to have the las laugh. 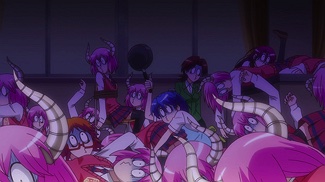 It's really about that final sequence, though - a musical montage that starts out seriously enough that you could almost believe for a second or two that the series is playing it straight. But this is Jitsu wa Watashi wa after all, and in the end this is possibly the loopiest two minutes of the entire show so far. It's sheer brilliance - the insult notes, the majestic beasts of the savannah, and finally the memorable scene that greets Asahi when he opens the classroom door. I don't think there's another comedy this year that would have tried an episode like that one, and I'm pretty certain there's not one that could have pulled it off.