Thing just got really, really interesting again on Diamond no Ace. And it's the most hated character on the show who got us there. 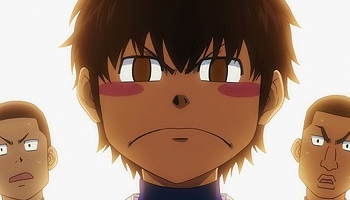 This series does have a way of hijacking the rest of the episode with the last couple of minutes, and this one was a shining example. The ending was what made this ep really fascinating, but it was perfectly fine before that - lots of bases were touched (pun intended) in the buildup to the quarterfinal match with Ouya High School. 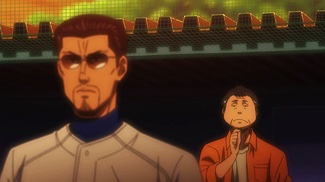 First things first - Sawamura is pitching in that game, and that's exactly as it should be. Furuya isn't fully recovered and Nori has done nothing to earn that level of confidence from his coach. With the semifinal and final being back to back, it's easy to see a scenario where Eijun pitches the quarters, Furuya the semis and Eijun the finals - though I'm not putting the cart that far in front of the horse yet. 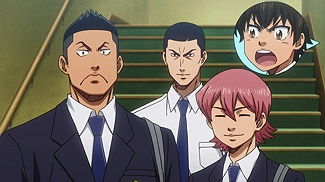 Eijun is appropriately pleased with the news, and even gets a hallway pep talk from the third-years (he tells Onii-san that Haruichi is in "a rebellious phase"). The second-years are asserting their seniority, with Zono urging Miyuki to call a second-years meeting and Kuramochi taking Haurichi to task for his fielding (poor Haruchin - everything is piling on him lately). 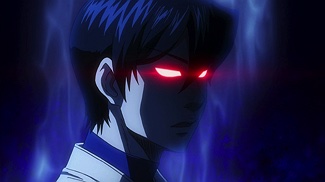 As for Furuya, he's about what you'd expect - impatient, sullen and resentful - though the three scrubs try and encourage him to consider getting healthy enough to play left field even if he can't pitch. Meanwhile Ouya is being set up a clear contrast against the elitist private-school "gorillas who practice all day". Their ace Gou is practicing stuff like the shuuto, trying to come up with any trickery he can to hold Seidou to three runs - which is what Gou-kun has calculated is necessary for Ouya to win. One of the really interesting things about Ace of Diamond is the way the hero school is one we might see portrayed as a villain in many series - the powerhouse school with lots of money - and it's always fascinating to see the opponent cast in the underdog role against them. 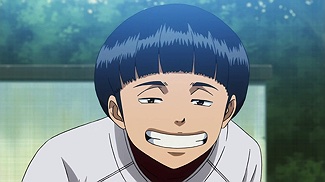 But without any question, the headliner here is Ochiai-kantoku. What a maddening character Ochiai is - both in the sense that he pisses you off, and that it's irritating as hell to see him used as a moustache-twirling villain. Without any question, Diamond no Ace is a lot more interesting when Ochiai is presented as a difficult, opaque figure rather than just an ogre to make Kataoka look good - but it sure hasn't happened too often. 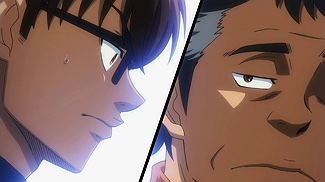 Ochiai starts things off this week in his usual best-worst form - badmouthing Sawamura to his teammates (including the captain) and flat-out telling Miyuki he shouldn't be the captain at all because he won't admit that the team is getting by on luck and that Eijun sucks. He seems for all the world as he did last week - a guy who's decided to flat-out sabotage the team in order to expedite the transition in power he believes is coming. 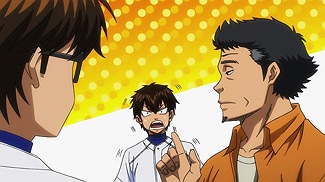 But as I've said many times, the fact is that Ochiai has often taken positions that make a good deal of sense - it's clear he knows something about baseball (as you'd expect, given his background). And when he confronts Eijun about what he's missing (credit to Eijun for understanding that he's far from a finished product) Ochiai doesn't just state the obvious - that Eijun needs an off-speed pitch - but reveals that he actually understands Eijun as a player and as a person extremely well. He's been paying close attention, and he cuts close to the bone - he knows what Eijun can do and what he can't, and even recognizes the techniques Eijun has been using to beat his yips. 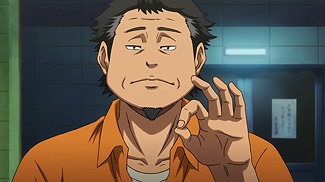 When Ochiai prescribes that Eijun start throwing the change-up, his reasoning makes perfect sense. It's an enormous risk trying such a gambit two days before a game, but Ochiai seems genuinely astute and on-point in his instruction - and the potential upside is huge. The thing is, though, because of the way he's acted up till now, I can't quite bring myself to trust this - part of me wonders it's a ploy by Ochiai to get Eijun to self-destruct once and for all, clearing the
decks for his pet Furuya. 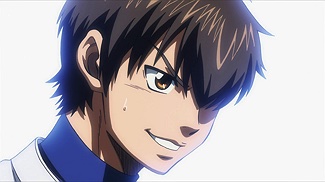 The point is, I don't know - and in this instance, not knowing is a really good thing. It adds an intrigue to the situation that's entirely welcome, and it shows why Ochiai has the potential to be a much more interesting character than Kataoka, if only he were used correctly. He's dangerous, but if he's shown as more than a destructive force, that danger makes Ochiai that much more compelling as a character. We'll see where this goes - I sincerely hope my suspicious are wrong, not just because I want things to go well for Eijun, but because I want Ochiai to have proved himself more than the cartoon baddie he so recently seemed to be.