The Zen of BooBies: Buddhism in Space Dandy

Space Dandy: the silly adventures of a dandy guy in space... or a complex story about achieving and rejecting Buddhist Enlightenment over the course of many lifetimes? Why not both? Join us as we examine the the hidden philosophical and religious themes within Shinichiro Watanabe's hit comedy. 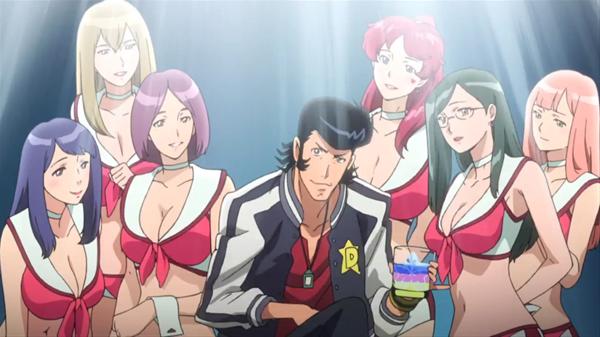 At a glance, Space Dandy looks like the most gleefully ridiculous anime this side of Jojo's Bizarre Adventure. So how'd you react if I told you that the whole show is actually about Buddhist religion and philosophy? Time to get on your thinking caps (or alternately shut off your conscious mind in meditation) as we over-analyze the adventures of Space Dandy and his brave space crew... in space! 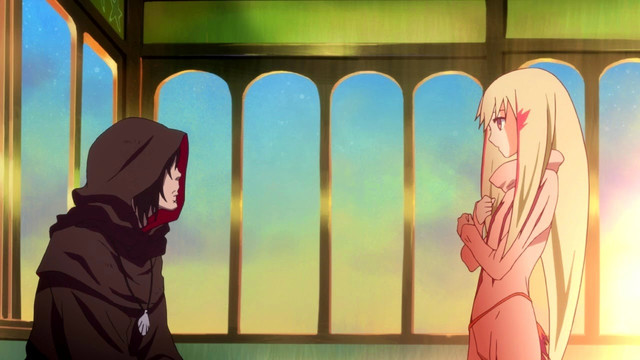 The most obvious connection between Space Dandy and Buddhism is the theme of reincarnation. At first Space Dandy seems to have zero continuity. All the main characters die at the end of the first episode, only to be back to normal in episode 2. The second season, however, explains Dandy's predicament. The season premiere, "I Can't Be the Only One, Baby", shows that different versions of Dandy live in different universes. Episode 21, "A World with No Sadness, Baby", finds the show in an unusually serious mode, showing Dandy in the world of the dead, where he is free of pain but also of pleasure. It explains he has died and been reborn an infinite number of times, to the point Death has developed a special relationship to him. Several episodes reinforce the theme of being trapped in a cycle of reincarnation within their own stand-alone storylines. Episode 10, "There's Always Tomorrow, Baby", finds Dandy and his crew stuck reliving the same day continually, with the omnipresent narrator commenting at the end that even as they've broken the cycle, the crew of the Aloha Oe are still "stuck in a loop." The following episode, "I'm Never Remembering You, Baby", presents another cyclical plot, finding the whole universe trapped in a war because of memory wipes. 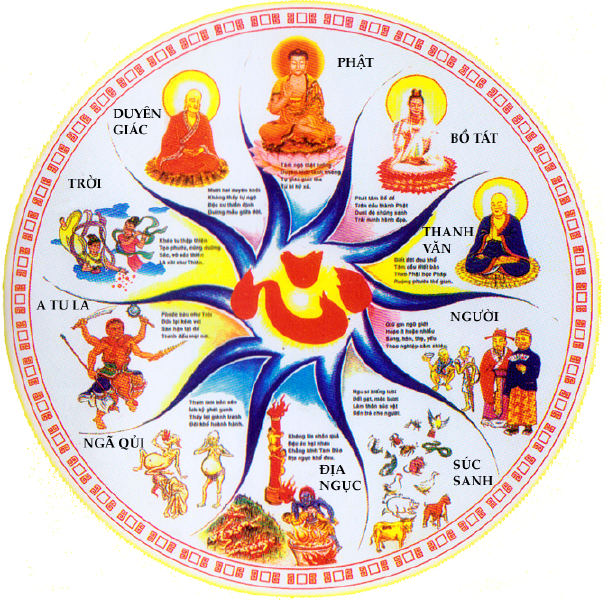 Mahayana Buddhism classifies levels of reincarnation through ten spiritual realms, six of desire and four of higher nobility. Through his many incarnations, Dandy finds himself in all of the desire realms and occasionally in some of the higher ones. The Buddhist description of Hell, defined by a sense of entrapment and exhaustion, certainly applies to our near-broke heroes much of the time. The world of hungry ghosts is the next level above Hell, and obsession with food certainly characterizes many of Dandy's adventures. The animal realm, centered around instinct without reason, can be compared to the zombie universe in episode 4, "Sometimes You Can't Live Without Dying, Baby." The level of Asuras (half-gods) is defined by arrogance, which Dandy is sometimes victim to. The human realm, just above the Asuras, is distinguished by both the potential to ascend to higher realms and its relatively short life span, so Dandy's continual deaths emphasize his humanity. Heaven is defined by material pleasure, temporarily pleasing but impermanent; to Dandy, the closest equivalent is his favorite "breastaurant" Boobies. Yet for all his base qualities, Dandy has certain virtues, including the ability to live in the moment and go with the flow of whatever craziness life sends his way, that allow him to access higher realms of learning, realization, and... Buddha-hood? 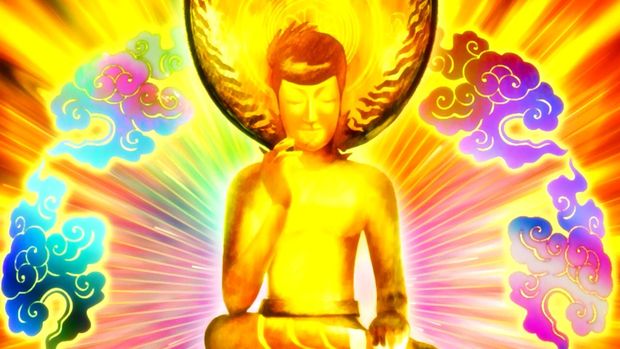 In episode 7, "A Race in Space is Dangerous, Baby", Dandy accidentally sends himself billions of years into the future to find himself being worshiped as the Buddha himself. It's one of the most surprising moments in a series known for its non-sequitur endings, but by the end of show's final episode, it turns out to not be just a joke. Parallels can be found between Dandy's and Buddha's journey (his pursuer-turned-ally Dr. Gel resembles Angulimala, whose murder attempts the Buddha kept unknowingly escaping from). At the end of the current multiverse, Dandy finds himself in a conversation with the show's narrator, who turns out to be God. Having become aware of the nature of existence, Dandy is given the offer to abandon the material realm and achieve Enlightenment. He rejects the offer. But this is not the rejection of the Bodhisattva, where Enlightenment is used as a means to help others in the material realm. He rejects Enlightenment so he can go to Boobies. Perhaps after another few billion years of reincarnation, the universe Dandy saw himself as Buddha in will come into being. For now, though, material attachments prove too strong for this dandy guy in space.

Special thanks to my friend Max for helping me research this article.