I don't know if you're the sort of person that follows the disc sales side of the anime industry - though if you're a serious fan you probably should be. If you are, you knew that Osomatsu-san is on target to be the best selling series of the Fall 2015 season - by a lot – almost since the beginning of the season. But even having that knowledge could hardly have prepared you for the stunning results when last week's sales numbers came in: Osomatsu-san Volume 1 sold 80,000 combined Blu-ray/DVD copies.

80 thousand. I'm going to give that a minute to sink in. 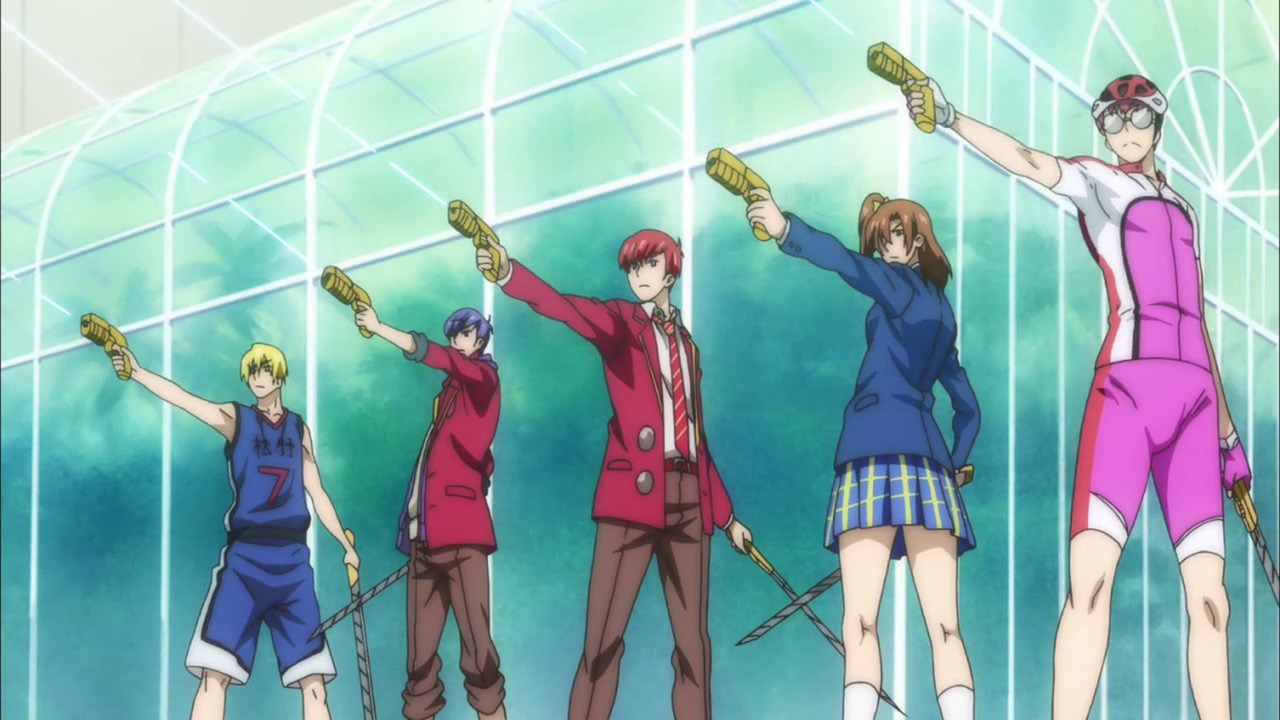 Let's cut right to it - that is a ridiculous number. Silly. As inflated as Stalker was, it underestimated Vol. 1 by 57% on DVD and 111% on Blu-ray. Titles popular with female fans often exceed Stalker estimates because of strong storefront sales at Animate! (one of Japan’s leading anime retailers with a strong female customer base) but this is almost unprecedented. Look at it this way – just the amount by which this volume was underestimated would have been enough to make it the #1 seller of the season by a more than 2-1 margin. Chew on that. 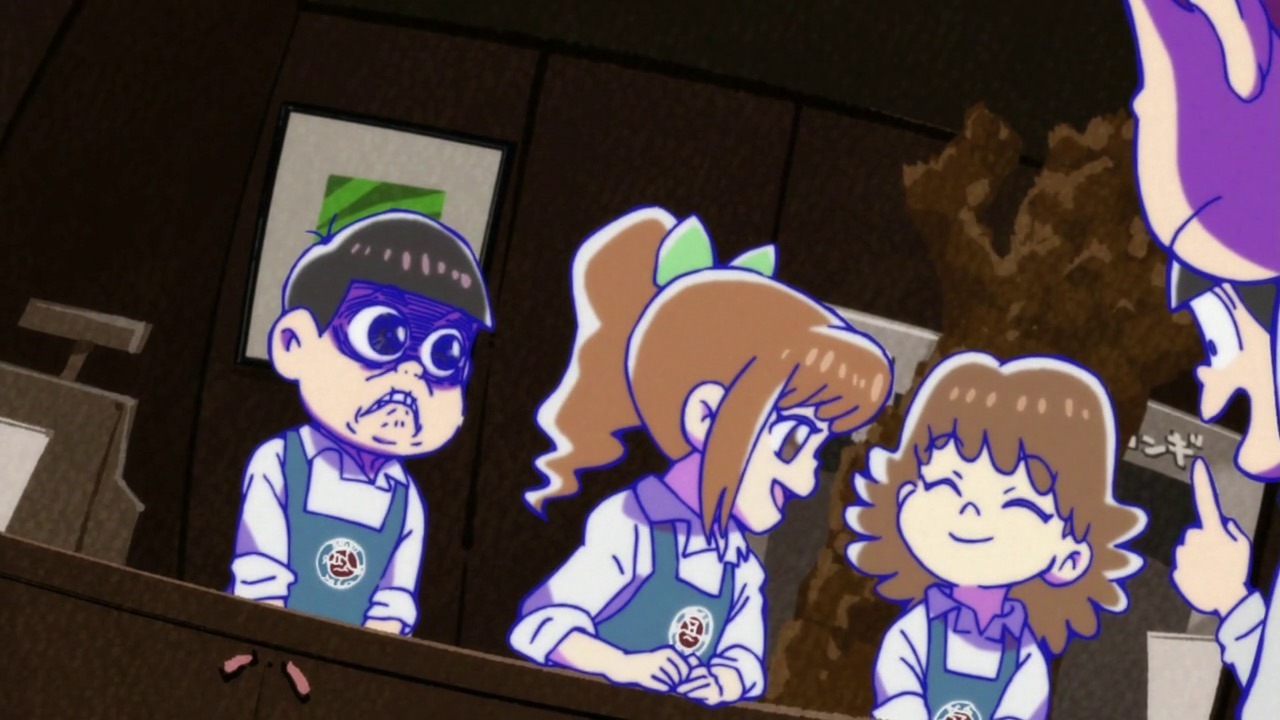 There are so many fascinating aspects to this unbelievable story, starting with the fact that a reboot of a 1960's manga/1980's family anime is now on-track to become only the second 100K anime volume of the millennium (110 -120K seems a reasonable guess, as the first week was actually only 4 days worth of sales). Some otaku have predictably tried to dismiss this as a fluke ("Event ticket bump!") and expressed chagrin that a "fujo show" just blew NisiOisin and idol shows out of the water like “Mythbusters” Jamie Hyneman to a Yugo. But these kinds of numbers categorically refute the notion that something like a seiyuu event (popular as these guys are) could be responsible, or that this is a series that appeals to just one demographic. Just the Blu-ray sales alone would have made Osomatsu-san easily the top-seller of the season, for crying out loud. Having left the mortal world behind, this show is now in the realm of cultural phenomena.

How does one begin to explain all this? How does a series like Osomatsu-san seem likely to end up at about 100-120,000 in sales for its first volume – which would make it only the second series anime of the century to hit that number – and finish as one of the top five TV anime of all-time in terms of average sales? Honestly, I don’t know – it’s one of the strangest developments I can remember in all my time as an anime fan. This incarnation of the anime was actually launched to commemorate the 80th birthday of the mangaka, Akatsuka Fujio (what does he think of the show and its success, I wonder?), and while I knew it was going to be a satirical take on the original Osomatsu-kun premise, I was in no way prepared for just how outlandish and frankly dark the comedy was going to be. 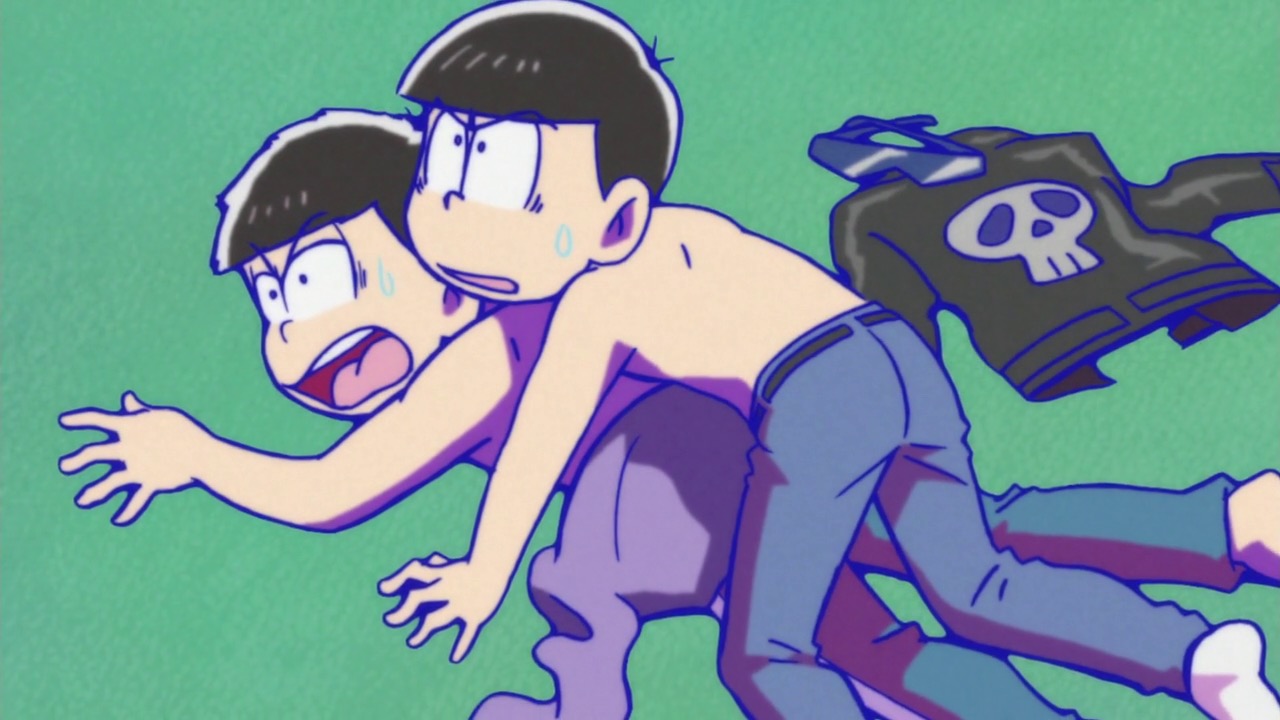 When this series started to become a sensation, I went back and checked out a couple episodes of the 1988-89 anime, also produced by Studio Pierrot (there’s also a 1966-67 Mainichi version which I haven’t seen), but in truth, there’s not much of the modern incarnation to be found in that one apart from the characters themselves. So if one is going to theorize as to why Osomatsu-san has touched such a nerve, I think they need to look past nostalgia for the franchise and touch on the anime itself. I think it’s a good bet most of the folks buying the discs now weren’t born when the last version aired, and certainly not when the original did (or ran as a manga). So what is it about the current version that has enthralled them so much? 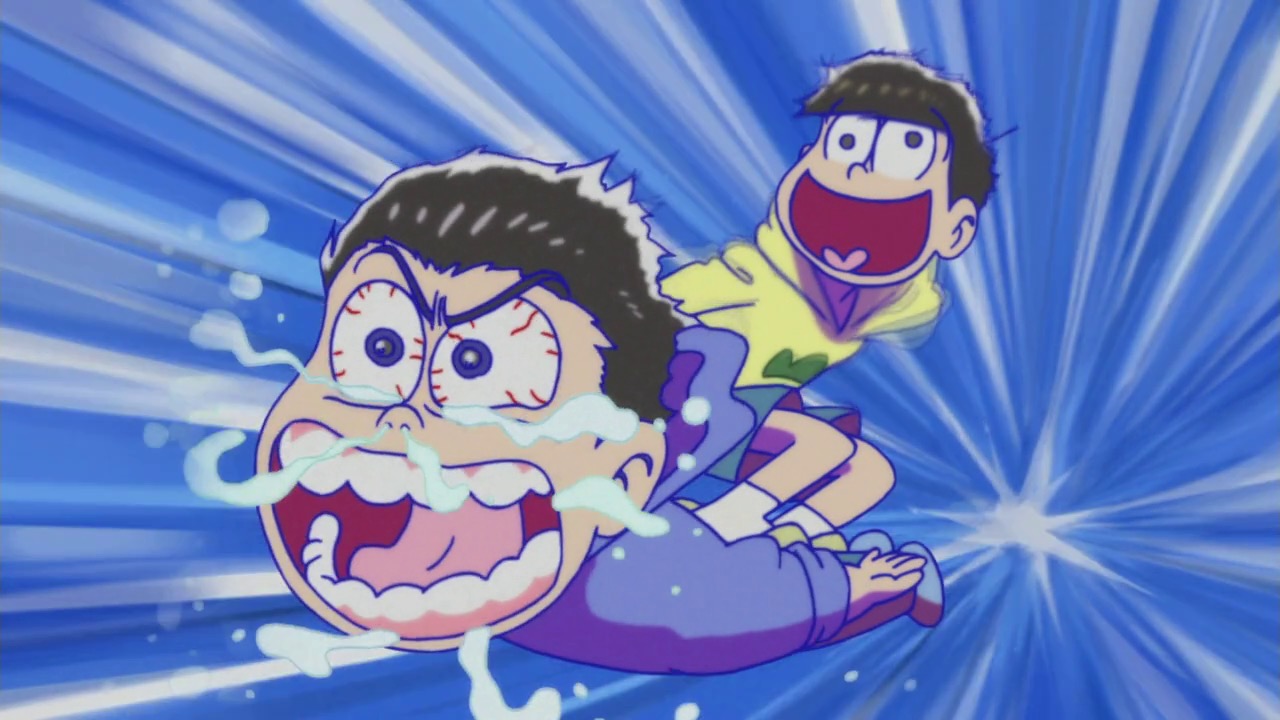 One can start, of course, with the fact that Osomatsu-san is a very funny show – at times genius. But genius is certainly no guarantor of popularity in anime these days. Right from the opening gun the creative team (Gintama director Fujita Yoichi and series writer Matsubara Shuu) cast Osomatsu-san as a satire of series aimed at women – the premiere featured the original cast trying to remake themselves as stars with female otaku - and have revisited that theme often. Were Fujita and Matsubara more prophetic than they realized, or has the fact that that’s exactly what’s happened been a happy accident? Osomatsu-san has indeed become a huge hit with females as the sales numbers show, but at these historic levels one can’t dismiss the fanbase as being limited to one demographic – 80K first-week sales indicates a true crossover hit which has even made an impact with the general public. And 33,000 Week One Blu-rays sold (Blu-rays are generally thought to be the media of choice for male fans, DVDs for females) doubly refutes the notion. 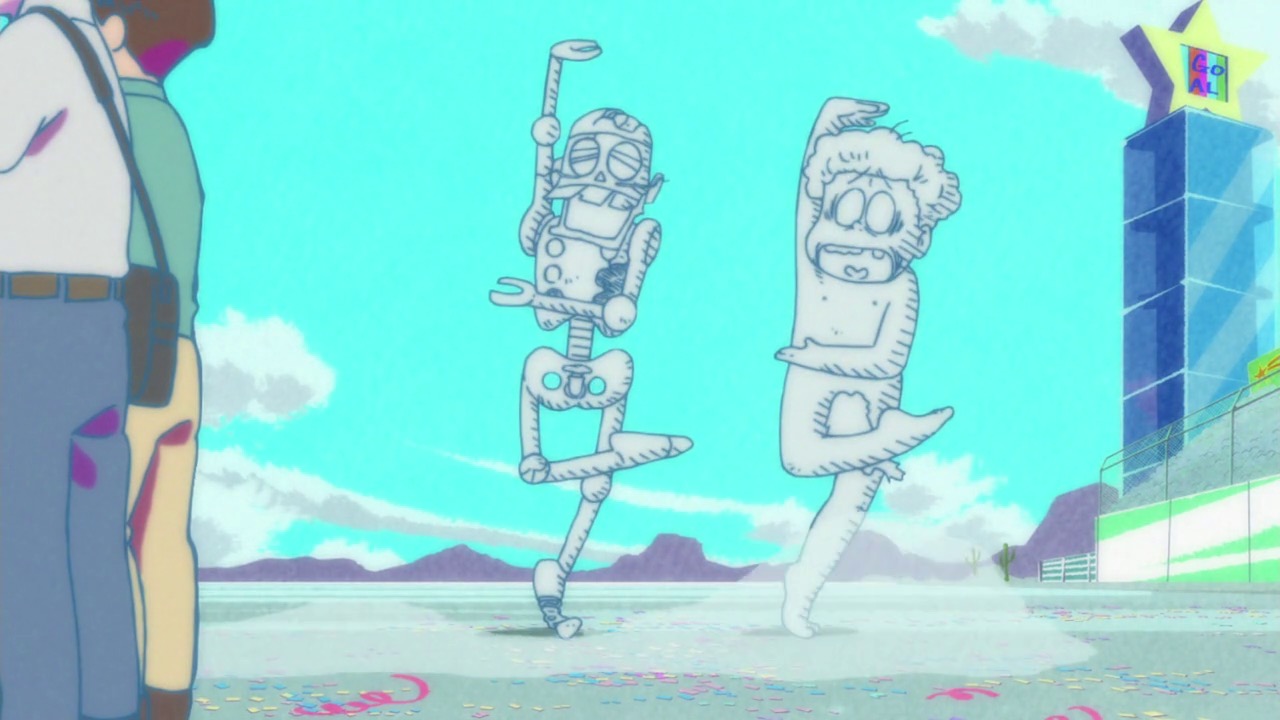 My best guess is that somehow, some way, Osomatsu-san has struck a perfect resonance with anime fans of a certain generation. Too much can be read into the sometimes-frantic hand-wringing over the “lost generation” of Japanese and their seeming lack of interest in work, marriage and even RL sex, but there is an undeniable malaise gripping young adults in Japan. They are marrying less, working less, expressing less interest in the opposite sex, and living at home more. The Matsuno sextuplets aren’t hikikomori or social wallflowers – they’re just a bunch of young adults with almost no (apart from Totty, arguably) ambition. They’re NEETs who live at home and have no experience with girls (again, Totty might arguably be an exception), but they actually seem to enjoy their lives. They play pachinko, they eat oden, they torture each other, they pursue their own interests, be they otaku concerns, impersonating college students to work at Sutabaa (Starbucks), or whatever, and even occasionally toy with the idea of getting real jobs. 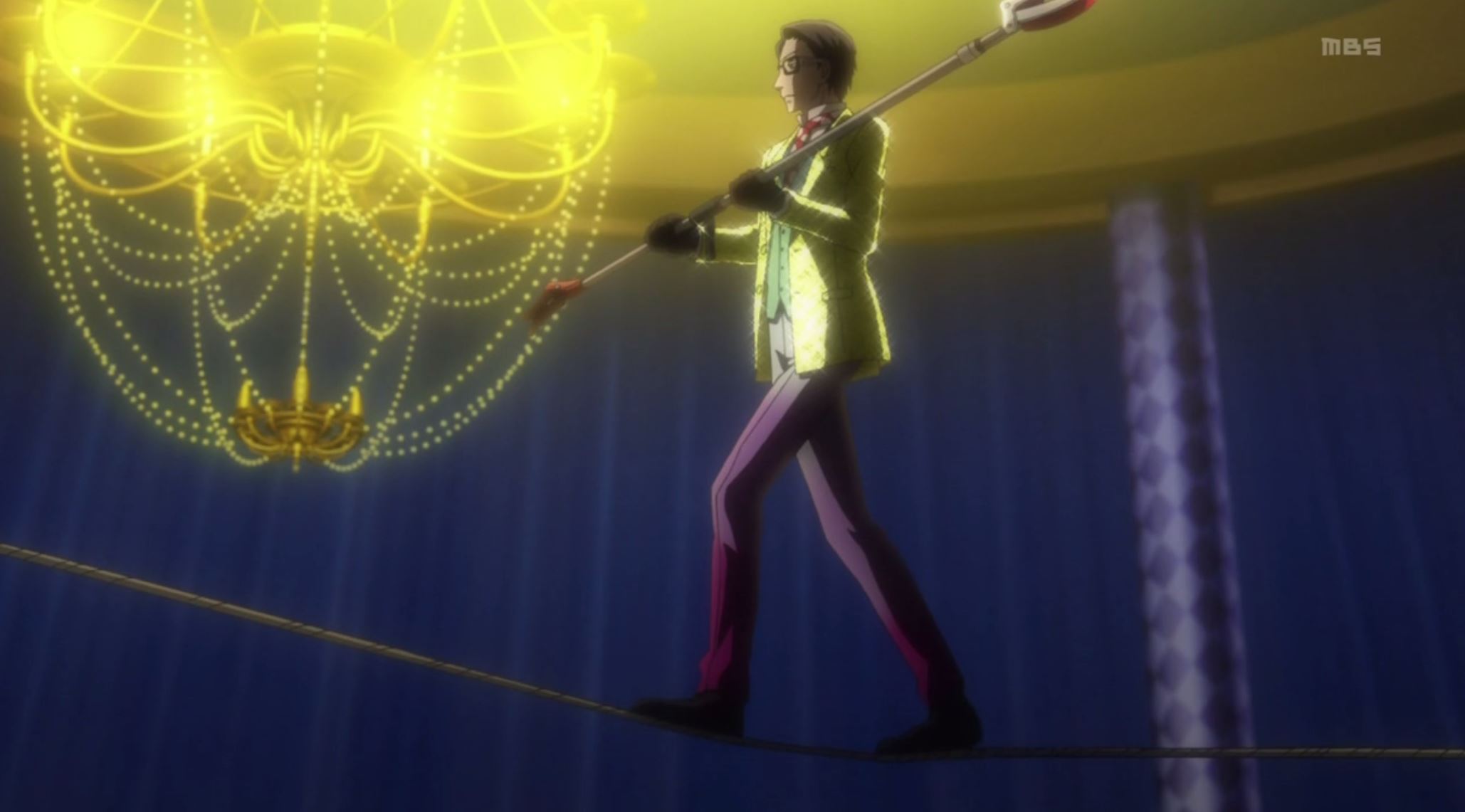 When a show is as massively successful as Osomatsu-san, I don’t think that success can be chalked up to any one or two elements – it’s something cosmic, the stars aligning perfectly at exactly the right time. And I think that’s exactly what’s happened here. This show is hilarious, and it allows viewers to laugh at themselves without feeling insulted. It’s ludicrous enough so as to be easily dismissible as fantasy, yet fans feel a connection to what they’re seeing on-screen because it’s fundamentally authentic to their experience - like all great absurdist comedies, it works because the absurdity is rooted in reality. That’s an incredibly difficult line to walk, but Osomatsu-san seems to be walking it like a gifted funambulist.