Here's a subtle way of aptly displaying sexual thoughts of both males and females which is appropriate for all ages: nosebleeds. By the laws of the anime world, no matter how much blood you lose, you can never die due to a nosebleed.

Why do people get nosebleeds in anime? 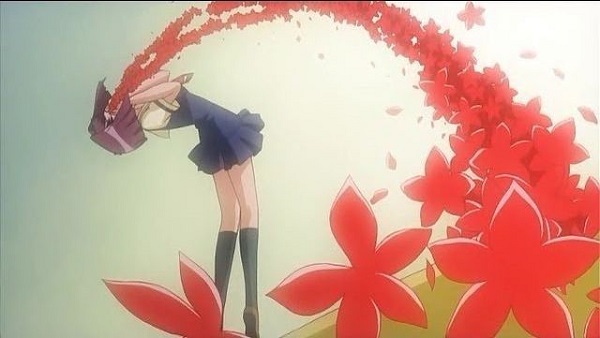 Following the age old Japanese myth (that nosebleeds are a indication of sexual thoughts) that perpetrates the cause of these nosebleeds, this upcoming method is probably a much more efficient way for boys or girls to showcase their reactions to sexual content. These scenes are notorious among all genres of anime. Let's take a look at a few anime with nosebleed scenes that are sure to make you wonder if you want to feel sorry or laugh at the character in question. 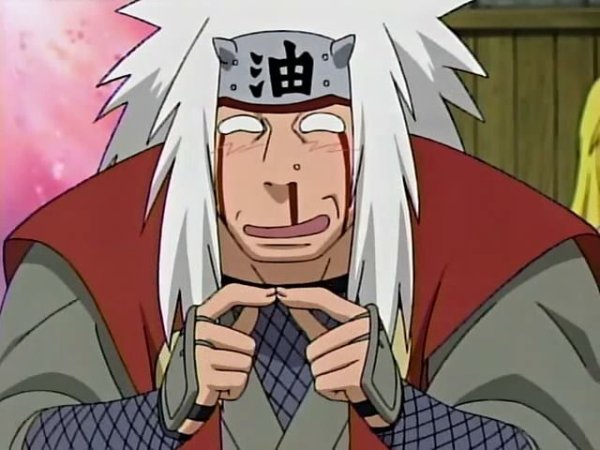 Naruto follows the journey of the childish Naruto Uzumaki who aspires to becomes the Hokage of his village. This show has more than its fair share of nosebleed action, stemming from an array of perverted characters in the show. 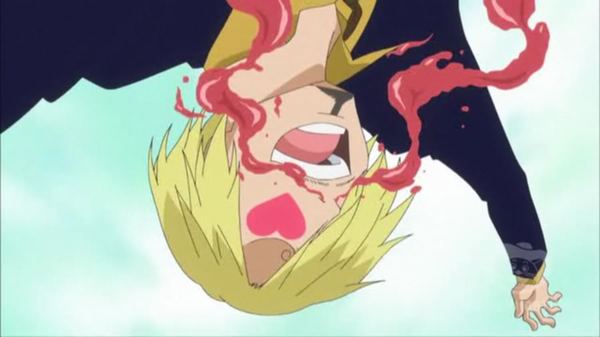 One of the top rated and most popular anime shows to flood the internet, One Piece earned its fame for its interesting storyline, crazy characters, blood pumping action scenes with a few bites of ecchi thrown in to add humor. The credit for some of the memorable nosebleed action goes to Sanji, the cook and crazy loon of the bunch (after Luffy, of course!) 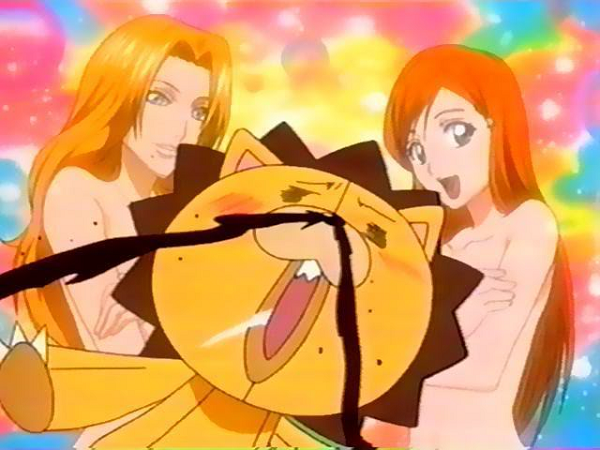 Bleach follows the story of orange-headed Ichigo Kurosaki, who becomes a temporary Shinigami after Rukia fails to defeat a Hollow during her encounter with it in the human world. The comic relief to the show is provided by Kon, the stuffed doll which nosebleeds after fantasizing about naked females. 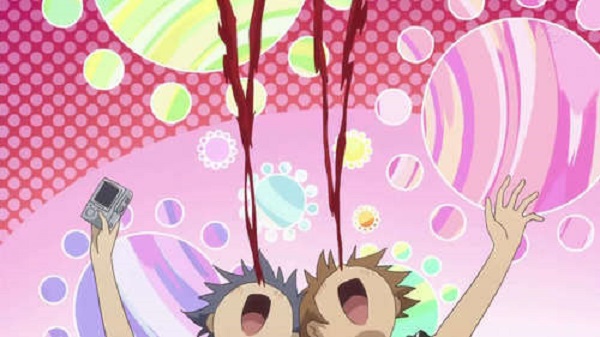 Baka to Test is a romantic comedy series that revolves around the main idiot of the show, Kouta Tsuchiya, aptly nicknamed the 'Silent Ninja Pervert' in the manga series, who is the source of copious amounts of massive nosebleeds at the slightest mention or on seeing anything remotely perverted. 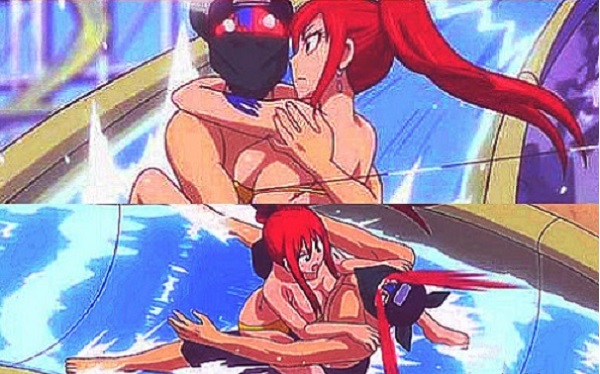 Following the adventures of the Natsu Dragneel and Lucy Heartfilia on their quest to find the legendary dragon, Igneel, this vivacious anime has a healthy dose of fun, frolic, laughter and not to forget, nosebleeds. 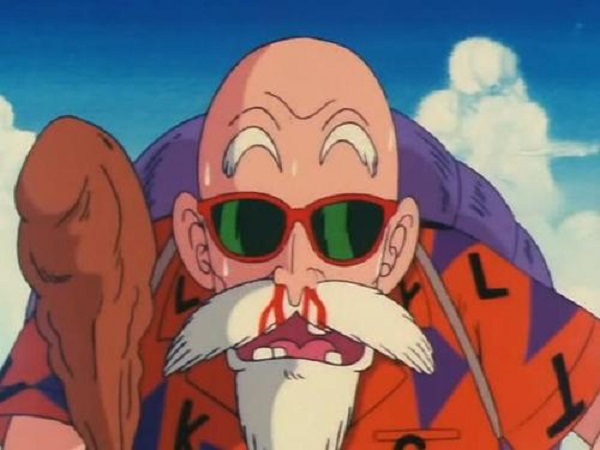 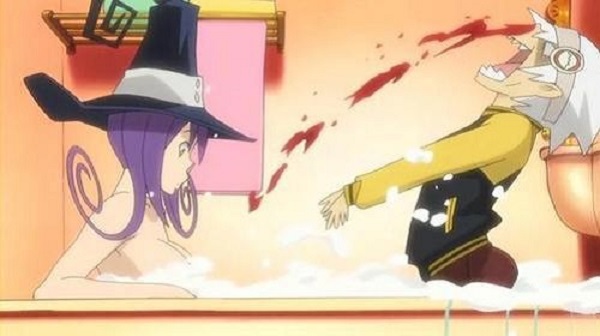 Soul Eater is a supernatural anime packed with remarkable action sequences which includes an enigmatic soul eater who nosebleeds without fail at the sight of naked or fully developed women, and is one of the main protagonists of the show. 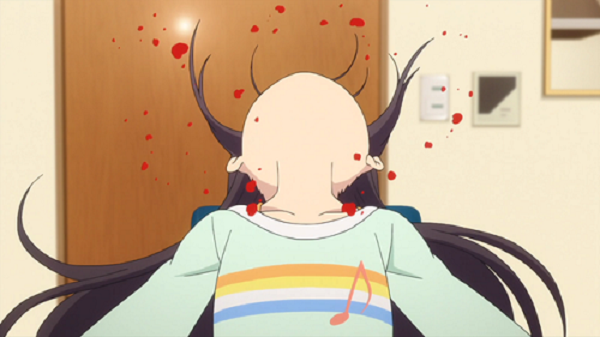 This adorable comedy drama gives a refreshing view into the comic nosebleed scene from a female's point of view. Ayumi Otosaka, one of the main protagonists of the show exhibits this unique feature, usually attributed to most of the males of the shows, whenever she encounters her idol, Yusa Nishimori. 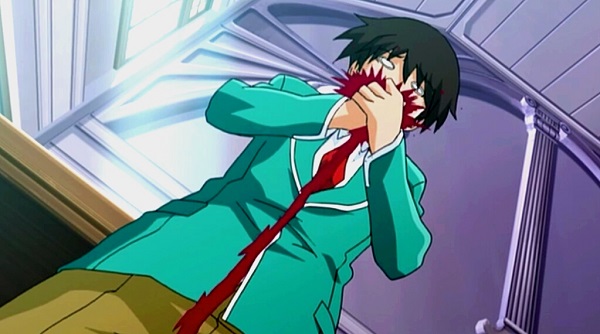 Tsukune Aono inadvertently gets enrolled at a Yokai academy where he gets seduced by multiple beautiful and deadly monster females often causing him to nosebleed, until he falls in love with a vampire.

Kanade Amakusa suffers from a curse of 'Multiple-choice curse', forced to choose from a set of choices that appear to him, most of them being weird and perverted. The end result: embarrassments and nosebleeds galore. 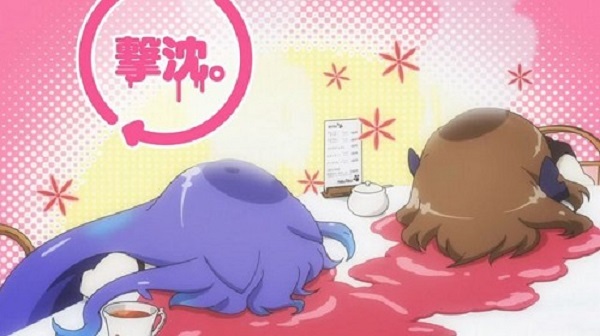 Hime Haruno, the air head of the bunch, is the host for most of the nosebleed episodes in the show on account of being easily riled or flustered. Her innocent and likeable personality are some reasons makes her the target for much teasing from her friends. 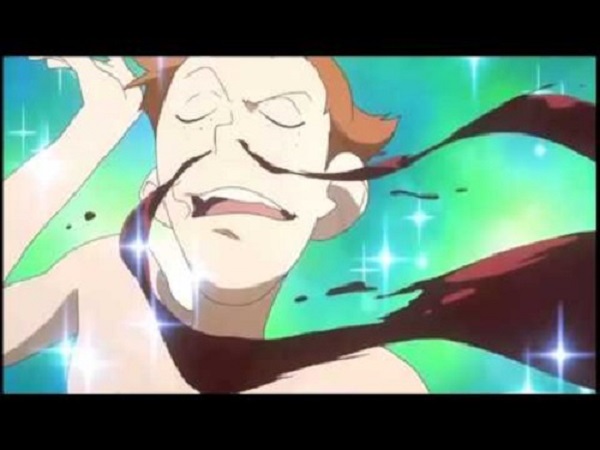 Tengen Toppa Gurren Lagan, the mecha anime with a gripping storyline, and an inspiration to many, houses some very interesting nosebleed scenes. 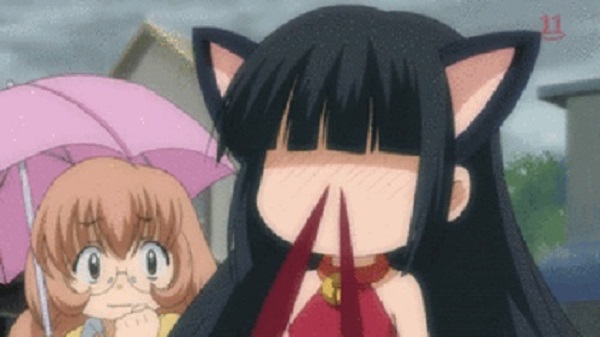 Kodomo no Jikan throws in multiple bizarre elements, as most anime do, with overdeveloped third grade children, their lovable personalities peppered with traces of perverseness leading to obvious nosebleed episodes. 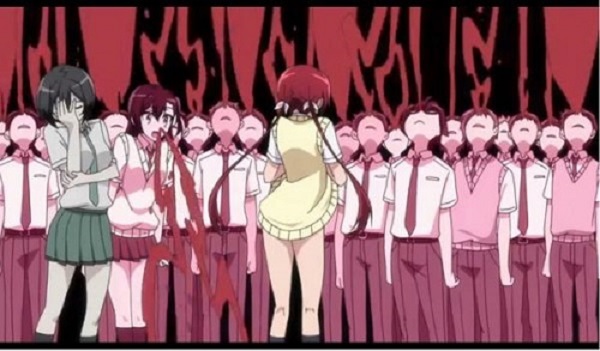 A class representative, a princess and an heir to her father's throne, Akane Sakurada is the shy protagonist of the show. Her fan club follows her around with hopes of getting a glimpse of her underwear and when they do, massive nosebleeds ensue. 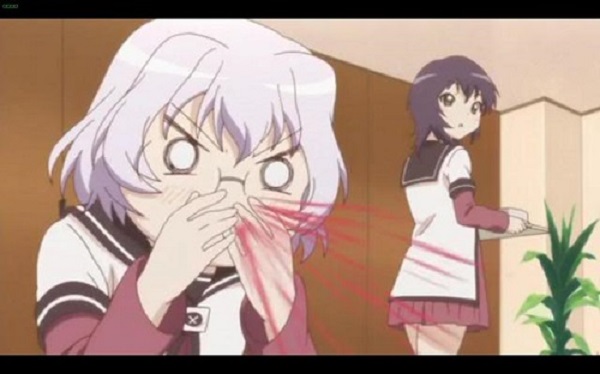 This absolutely adorable anime which revolves around the activities of a group of students in their middle school Amusement Club, is full of delightful comedy and epic nosebleeds. Especially from one of the main characters of the show, Chitose Ikeda, who is subjected to most of them from the antics of the rest.

Whether its massive amounts of blood loss from a battle or from sheer perverseness, our heroes get right back up into the game.

Check out 14 other anime cliches here!

We've celebrated the great stories, wonderful characters, inspiring soundtracks and gripping plot twists in anime. Now it's time to celebrate something a little different: Anime butts, and who has the greatest appreciation for ass in this medium. Yes really, we're going there