What happens when an anime goes on break? An eyecatch appears! Studios have produced these short clips not only to help transition into commercials, but also to provide you with special entertainment or important info. And without further ado, here are 15 of the most interesting anime eyecatches!

There have always been a lot of distinctive moments in anime, but how about in anime episodes? Many great things can take place, and that includes the animation that happens when the show goes into commercials -- that's an eyecatch. 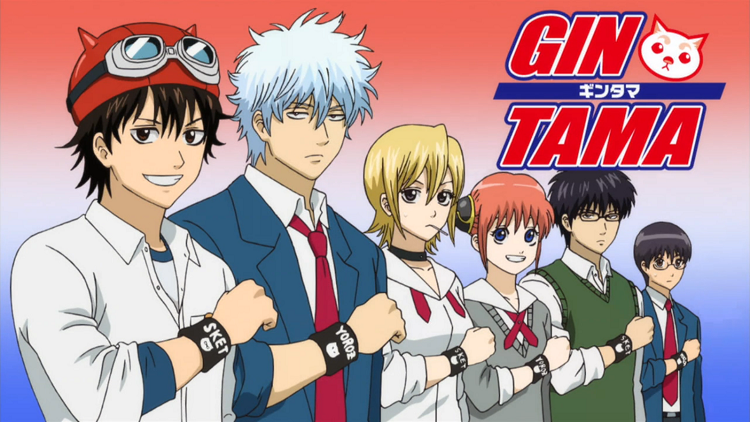 Eyecatches are blurbs when an anime goes into and then comes back from commercials. A lot of them are more inventive than others, as they could be the characters doing fourth wall stuff, a wall of information, or creative movements. 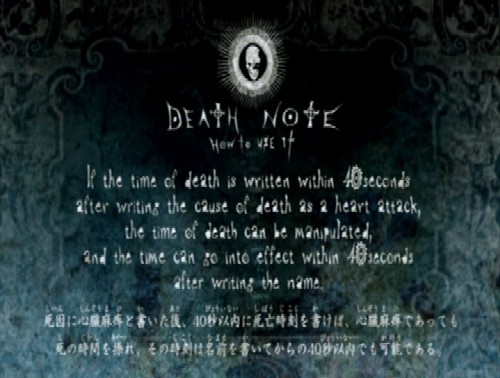 A good example of an eyecatch that features that wall of information is Death Note. Obviously well known for its battle between Light Yagami and L, another neat thing that people noted was the Death Note information feature that would be shown at every commercial break. While not paying attention to it won't affect the actual enjoyment of the anime, it is neat to see it since it can provide a bit more information or reinforce what the episode's crucial moments are with information that was taken from the manga.

The 1995 Sarin Gas attack is one very big theme in the ridiculously exciting Mawaru Penguindrum, and while we go through every episode watching how Shoma, Kanba, and the Penguindrum crew try and fight their fates, when it's break time, we get an eyecatch of... a penguin on a train. Specifically, this is good reinforcement of A) how complicated the train systems in Japan are and B) Where the show's aiming to get us to go. Yes, this is one eyecatch that takes place before and after the commercial that gives you an idea of where everyone's trying to go.

Eichiiro Oda's One Piece continues to be of the most important franchises for both manga and anime, and since the anime's start, eyecatches have been pretty prevalent in it, whether it's for the whole crew, or for just one. You can be mostly sure it fits the theme of the character.

The Dragon Ball franchise may not be quite as famous as One Piece is recently, but it still has a huge fanbase, especially overseas. But this popularity is mostly directed towards the Dragon Ball Z series, which actually featured quite a few interesting eyecatches in its run. However the cute eyecatch shown above is from the original Dragon Ball anime and shows Goku as a kid teaching his teacher Roshi a important lesson in life - always treat your opponent with respect... or else!

If you've seen, or even heard about, Yoshihiro Togashi's Yuu☆Yuu☆Hakusho then you probably know it has some tough guys and gals, lots of fighting, and not a lot of detective work. Just Yusuke Urameshi and his crew kicking ass and taking names. But in the commercial breaks, their antics are chibi-fied and they are reduced to being just plain adorable. The gap between the eyecatch and the anime itself is what makes the clip so great!

The 3rd entry in the Digimon series had a lot to follow up on, and one way it did that was by taking what was established and turning it into a card game. Yes, in this case it was a good thing, since it still involved bringing children together and having them fight to save their world. No, they did not save the world with toy figures like in this eyecatch, though the Digimon involved in said eyecatch may have been involved in doing some saving...

One of Rumiko Takahashi's most famous series, Ranma 1/2 featured a boy that could turn into a girl, other girls that may or may not have wanted the main character's attention, and a Panda named Mr. Panda.

It's not an ordinary rom-com series, in case you haven't noticed, and this "unique" eyecatch backs that fact up! 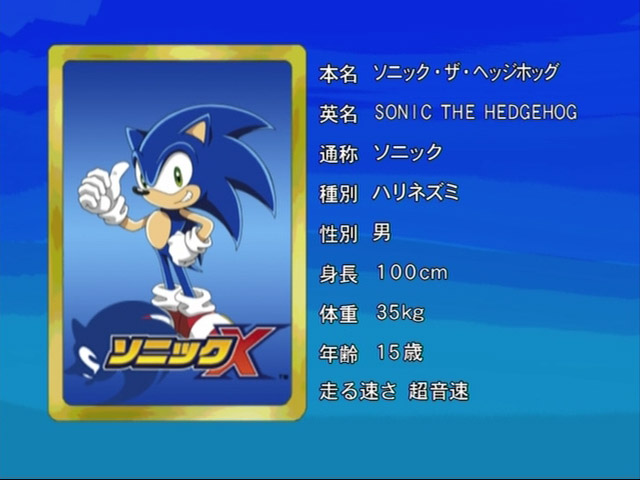 In case you didn't know, Sonic X in Japan was drastically different than the one that aired overseas (thanks a lot 4Kids), with several eyecatches included, though they mostly just provided viewers with information by highlighting the profiles of characters.

Created in 2002 by Ikuko Itoh, Princess Tutu takes some cues from one of the more famous magical girl series, Sailor Moon, and turns it into a ballerina battle that's prevalent in all of its 26 episodes. It also can be set to certain themes, and that may or may not involve a nutcracker and music.

Speaking of Sailor Moon, Ikuko Itoh was a member of the staff of the series. Like some titles on this list, Sailor Moon was a huge hit, not only in Japan, but also overseas (unfortunately, eyecatches were not included when first released outside of Japan). The eyecatch shown above is from the Japanese version of the series and features two clips, with a very small difference in the two. It's not much, but it's there. Did you notice it? 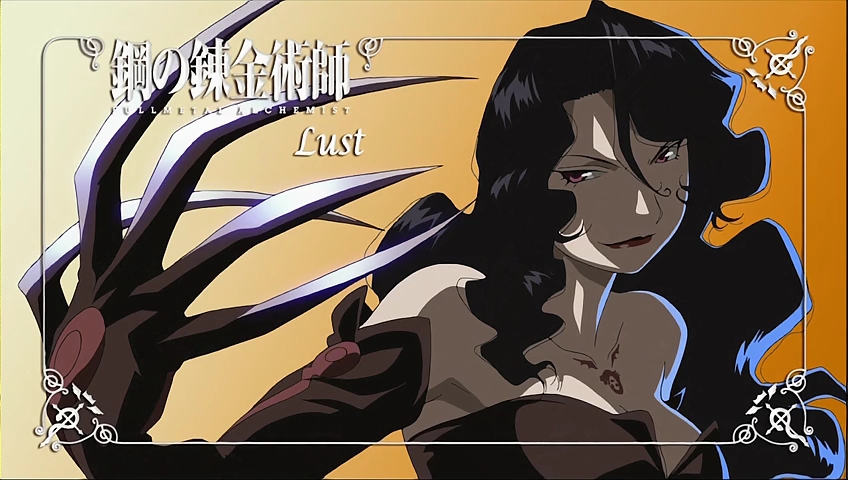 Brotherhood essentially was more like the manga than the first anime series, which meant new characters, new arcs, and the right conclusion. Along the way, we got to see character images before and after commercials in each anime eyecatch. Like Lust. 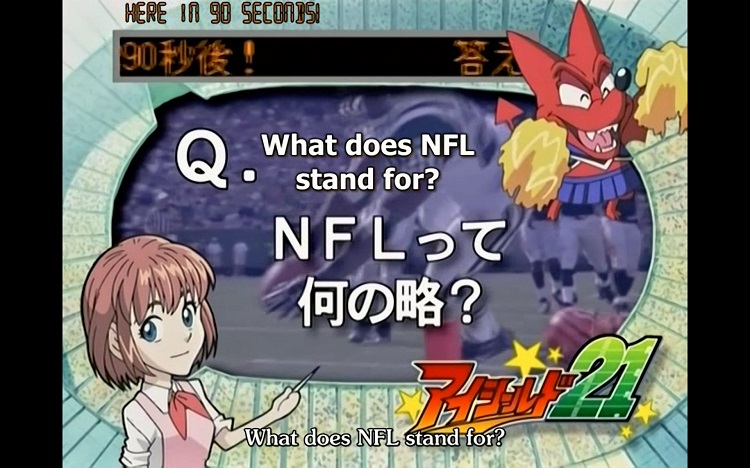 Eyeshield 21 is exactly the type of sports anime that would not do as well overseas as in Japan, as it is based a lot around football. It was of course super popular in Japan, but as football is not a famous sport over there, it had to explain some aspects of the game. So here's an eyecatch that's more of a lesson about the rules than anything else.

Gurren Lagann is one anime involving drilling that turns out to be way more than just that, and it's popularity, even today, is significant. It also has some nicely animated eyecatches, as you can see in the clip above.

Most Gundam anime have eyecatch clips, and they're all fairly interesting. Gundam SEED, in particular, had a few great ones, including this lovely eyecatch involving the main characters in the anime dancing around and blowing bubbles.

This eyecatch might be the most famous of this entire list, more so to those born overseas than in Japan. After all, when we grew up, the first thing some of us watched was Pokemon, featuring some loser kid who got an electric yellow rodent and then declared that he wanted to be a Pokemon Master. How cool must that have been? What was even cooler was when the "Who's that Pokemon?!" eyecatch took place. It kept us guessing and was a neat thing that introduced Pokemon in a playful manner. The nostalgia of this famous anime eyecatch is definitely something that you can't compare to anything else.

Eyecatch clips and pics in anime are definitely dying down compared to the past, especially as the cost of making anime goes up. That's why if you see a new one, note it, then file it to memory as you keep them in mind down the road.