In episode six of Aoharu x Kikanjuu, the tournament finally begins and all the important players come together for an exciting battle. While in episode seven, skilled fighters equipped with sniper rifles and heavy artillery guns wreak havoc in a forest. 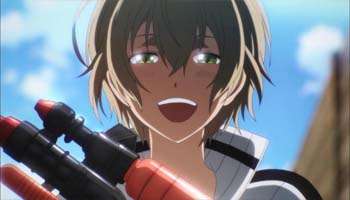 In the previous episode of Aoharu X Kikanjuu, Hotaru is conflicted about keeping her true genre a secret from her teammates, since they have a "no girls allowed" policy. This is resolved in this episode when she realizes her team might keep her, after she defeats the person that "killed" their former female teammate in the last TGC tournament. 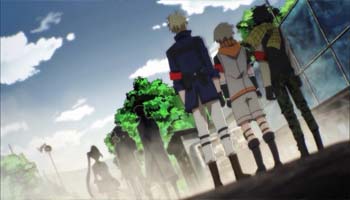 Episode six announces the start of the TGC tournament, and it features all the loose story arcs coming together. Masamune and Midori meet again, after their last encounter in the previous TGC battle. We are also introduced to Midori's team, who are actually the four time champions of TGC. They're the team to beat, and Masamune's team has a score to settle with them so they're in luck, because they'll be facing off with Team Midori in the first round. Everything the story has built up to this point seems to be reaching a conclusion just halfway through the show. I initially thought that Team Midori will be the last team they'll face, and it makes a lot more sense that way. This feels like a repeat of the first story arc, about Hotaru paying off her debt by playing survival games with Masamune, which the anime concluded abruptly in favor of a new one. It seems like the story arc about the tournament will end early in the following episodes, and a new one will be established later on. The abrupt pacing is fine for now, since it promises that history might repeat itself. I got chills when Midori hints that he knows Hotaru is a girl and the ominous statement, just mere moments before they battle, adds excitement to the show's unsteady pace. 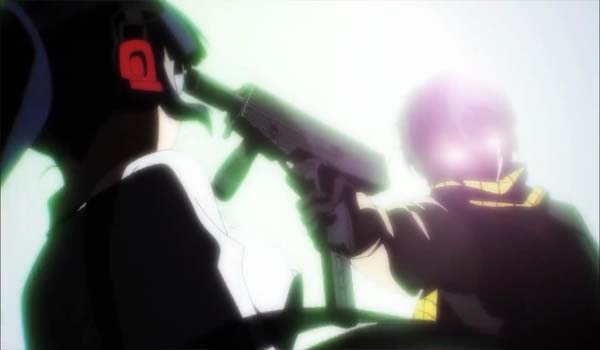 Episode seven featured the first round battle, and both teams face off in one-on-one matches. Team Masamune's goal is to divide Team Midori, giving them a better chance of defeating the four time champs. This episode features a wonderful battle between two snipers, and Hotaru facing off against a man with a Gatling gun. The sniper battle is unique, because the characters created tension with some monologues, and then proceed to have a tactical showdown trying to outsmart each other. Team Midori's sniper, Ichi Akabane, actually prefers close-quarters combat and Toru must be quick with his response. It is a beautiful battle of one-upmanship, full of flashy stand offs, which ends in a draw after Toru realizes his opponent decided to target Masamune instead. He gives chase, knowing Masamune has no chance defeating Midori with a sniper aiming for him as well. 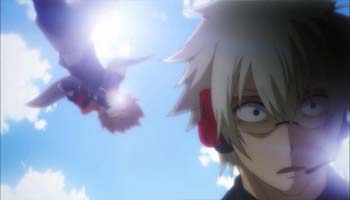 The face-off between Hotaru and Takatora Fujimoto has a more satisfying conclusion to it. Seeing the Gatling gun fire devastating shots, that forcefully rips off barks from trees, gives you an idea how tough Hotaru's opponent is. She is even cornered trying to escape, but her speed saves her at the last minute. She charges her opponent head on, and uses the Gatling gun's weight to get an advantage over Takatora. It is so amazing seeing her launch herself with the opponent's gun, and gets a decisive shot to "kill" Takatora. If only she didn't have her safety on, then the moment would've been a lot more impressive. She accepts her loss but Takatora believes that Hotaru won their battle, and admits his defeat. He voluntarily walked off the field, giving Team Midori the advantage. With her incredible win, Hotaru races off to find Masamune, and help defeat Midori. 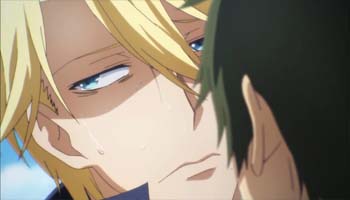 Midori is introduced as a real threat in episode six, and the unsettling murmurs of the other competitors gives you an idea how scary the guy is. Perhaps it's his meeting with Masamune that painted a more telling picture, when Masamune couldn't look Midori in the eye and behaves like a submissive puppy in front of his abusive master. The story is suggesting that Midori is a monster, but it's too soon to call it. He has yet to draw his gun and fire it, so the audience still has no idea just how fearsome this guy is. Once he does fire it, he might shock us all 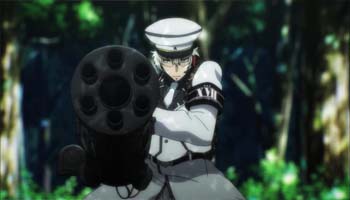 Takatora is the tall fellow who wanted Midori to ride his bike in previous episodes. He is a lot gentler than he looks, because he gives Hotaru a chance to forfeit. He thought about the rookie having a bitter experience when she is gunned down by a Gatling gun, and, unlike his more aggressive teammates, didn't show any sign of bloodlust. He also mentions that he didn't harm anyone in Masamune's team the last time they fought, and this suggests Midori "killed" the other teammate alone. It makes you wonder just how potentially evil Midori is.

The conclusion of this battle might involve a repeat of history, where Midori shoots a defenseless Hotaru in front of Masamune, and then revealing to everyone that Hotaru is actually a girl.