Top 10 The Most Bloody, Chilling Death GIFs in Corpse Party

True evil can never be fully contained or destroyed. Read and see how the students of Kisaragi Academy learn that the hard way, with a vengeful spirit out for their blood. [WARNING: Severe blood and gore in this article!!]

Anyone and everyone who is well associated with the Corpse Party franchise, is bound to be acquainted with the amount of spilt blood, unadulterated violence and gore associated with that name. The story is quite simple really. One stormy night, a group of students who belong to Kisaragi Academy, stay behind after school hours to exchange chilling stories about the ghosts of an old school, Heavenly Host Elementary school, which was torn down due to perplexing incidents regarding the mysterious murders and disappearances of its staff and students. They then decide to perform an innocent charm named "Sachiko Ever After " , which would unite them and keep them as friends for eternity. Little did they realize that their harmless spell has unleashed the full force of the horrifying evil that has existed for ages, despite the old school having been abolished.

Once the charm is completed, a sudden earthquake descends upon the school and transports them to an alternate dimension where the old, haunted ruins of Heavenly Host still stands, along with all its ghoulish and horrifying secrets. They try to figure out the secrets of the accursed school whilst trying to stay alive in the midst of the ensuing torture and mayhem that threatens to destroy all of them.

Some of the deaths and scenes that occur in the anime are quite ghastly, to say the least, with the amount of macabre quality associated with the murder of the students. The students are subjected to some of the most inhumane tests ever, which are not for the weak of hearts.

List of the most grisly deaths that had viewers cringing at the amount of blood and guts spilled on the floor.

Mayu Suzumoto's death where she's dragged through the long hallway by the vengeful ghosts of Tokiko Tsuji and Yuki Kanno, and her body is launched against a wall with full force, causing her entire body to splatter and her guts to paint the wall red.

When the ghosts who were killed in the school attempt to show Mayumi the real killer behind all the deaths, Ayumi is taken into a flashback which reveals three students being stabbed and dismembered. Sachiko appears in front of her and gorges her eye with a pair of scissors, which leads to a lot of blood spurt and an eye being torn out of its roots.

When Yoshiki tries to save Yuka, but is too late to save her from Yuuya who stabs one of her eyes and before sinking a knife into her. Yoshiki decapitates Yuuya's head with a sword who goes down like the others, in a rain of blood.

After Yoshiki Kishinuma tries to save Yuka and kills Yuuya in the process, he gets his skull smashed in and disemboweled by the ghost of Yoshikazu Yanagihori.

Yui Shishido, the English and Homeroom teacher, gets decapitated due to falling debris during an earthquake.

Sakutaro Morishige gets stabbed in the neck while engaging in a fight with Yuuya Kizami.

Although the series lacks a good plot of any kind, it is a must watch for any die-hard fan of blood soaked gore fests, especially with the ingenious way in which the different characters die. 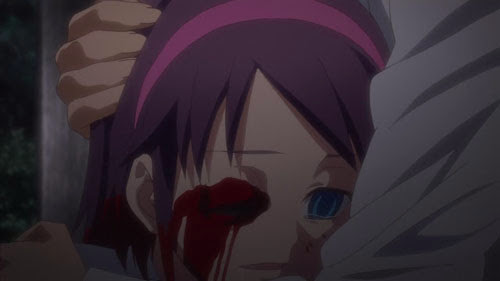 Paprika, Satoshi Kon's 2006 film, is full of astounding, sometimes disturbing, scenes. Here, for your viewing pleasure, are a few GIF images from the film that will make you question reality. Warning: Some are not for the faint of heart!