Bayonetta is the titular character of the anime movie Bayonetta: Bloody Fate, the movie is based off the extremely popular video game franchise. One could argue that it's one of the most successful video game adaptions ever made. Sadly, that's not saying a lot due to the abysmal quality of most movies based off video games. The story is about a war between sages and witches, and some talk about the left and right eyes of creation. In reality, that's all just framework for the real point of the movie, watching Bayonetta dish out an ass-kicking and to look sexy while kicking said ass. 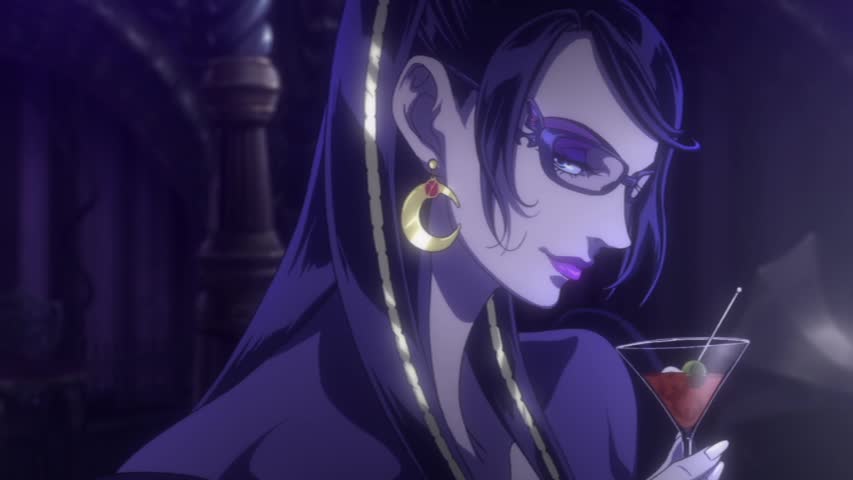 Bayonetta may be a witch, but she has about as much in common with her Wizard of Oz counterpart as an exotic dancer does with a housewife. You won't find any pointy hats, wrinkled faces, or crooked noses watching this movie. What you will find is enough sex appeal to raise the price of hand lotion. The artists, whose job it is to animate Bayonetta's body, have to feel like they've won the lottery. Prepare for things to start to get hot and heavy, because here come the GIFs.

Time to take a bathroom break.

A sexy and practical storage solution.

I've never been more interested in the amount of licks it takes to get to the center of a lollipop, till now.

Who is that Sleeping Beauty girl again? I forgot.

If I had to choose between being Bayonetta's Prince Charming, or being an astronaut... Pfft, the moon is overrated.

Dammit! Why does the hair always gets in the way of the best parts?

That shower head is so lucky.

Get that man to a hospital!

"What seems to be the problem nurse?"-Doctor
"His blood pressures is dropping."-Nurse
"What? How?"-Doctor
"All his blood is going to his..."-Nurse

You would think Bayonetta would have at least a couple of conservative outfits.

Body armor? A helmet? Maybe a some cargo pants?

It looks so wrong, but feels so right.

Her suit's not leather? Mind Blown.

A wink from Bayonetta can both break hearts and kill angels.

I both hate and love that hair. It just keeps getting in the way.

Alright time to calm down and let all the blood return to your head. Yes, Bayonetta is an awesome sexy bad-ass. Yes, her creators need to be given a Nobel medal. Whoever you are, on behalf of everyone, thank you.