All About The 17 Kekkei Genkai Abilities of NARUTO

Bloodline limits (Kekkei Genkai) are special abilities or bodily constitutions passed down genetically. Here's a complete list of the bloodline limits that play key roles in this series by Masashi Kishimoto.

What are Kekkei Genkai(Bloodline Limits)? 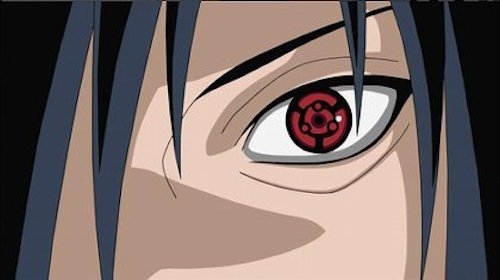 Bloodline limits (Kekkei Genkai) are special abilities or bodily constitutions passed down genetically. Generally speaking, only those born into the bloodline possess the potential, although the power level may vary. In some cases the power lies dormant until awakened.

There are mainly three types of Kekkei Genkai. One is Doujutsu, represented by Uchiha family’s Sharingan. Another is Nature Transformation, which is to combine two of the five main elements (fire, water, wind, earth, thunder) to create a new nature. The last one is idiosyncrasy type, including Kimimaro’s Shikotsumyaku.

This refers to ninja techniques executed using one’s eyes. They do not require hand seals, but tend to use a great deal of chakra and stamina. The three most famous ones are the Sharingan, Byakugan, and the Rinnegan.

The Byakugan grants an almost perfect field of vision through even solid objects, except a small blind spot near the second vertebrae behind the individual. The user also gains the ability to see meters to even kilometers further. The Byakugan also detects chakra fields that result from casting ninja techniques, giving the user the ability to detect illusions, and even gives the chakra pathways of other ninja, which led to the development of the signature Hyuuga fighting style.

Gives the user the ability to learn and use any ninjutsu, genjutsu, or taijutsu simply by witnessing it. (This excludes other Bloodline Limits, of course.) The user also gains the ability to see faster movements, as well as detect chakra to the point where it’s possible to differ between a clone and the real person.

The Mangekyou Sharingan is gained upon seeing the dead of a loved one with a regular Sharingan. This upgrade is exponentially more powerful than the original, and grants additional powers that vary from person to person. Using the Mangekyou Sharingan causes excessive strain on the eyes, and the user loses their vision when Mangekyou is activated until they go blind.

The Special Abilities of Mangekyou Sharingan 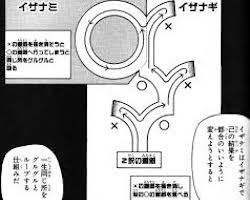 The technique created in order to punish abusers of the Izanagi. Like its counterpart, also blinds the eye that it uses. Using Izanami, it’s possible to trap the target in an unending cycle of the same event by feeding the memory and sensations of the event through the Sharingan. Instead of escaping a situation, the target is forced to repeat that moment endlessly until they decide to reject the Izanagi illusion in favor of true reality.

The user gains the ability to teleport either themselves or an area in their line of sight into a barrier dimension. This ability can be used to dodge enemy attacks, or absorb enemy projectiles and send them back towards the caster. The amount of time the user can spend in the separate dimension is limited.

A black flame that burns through anything for seven days and seven nights is manifested at the point of focus. 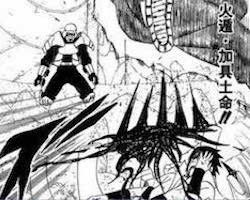 Grants the ability to further manipulate Amaterasu. The user can transform the flames to use defensively as a shield, or shape them into spears of flame for offense. 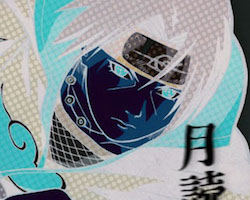 Creates an illusion where the user is able to control mass, space, and even time. This technique requires eye contact to be performed. Whatever horrors the victim suffers are not visible to bystanders, although they frequently leave the victim psychologically scarred. 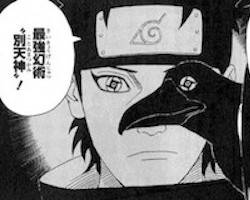 An undetectable illusion that implants false memories into a target, controlling them even while they believe they are acting of their own free will.

By bringing shape to the user’s chakra, Susanoo provides heavy defense against all ninjutsu, while attacking on the user’s behalf. Susanoo also has additional powers that vary according to the user.
-The Sword of Totsuka: A katana that can seal anyone it strikes in a genjutsu for eternity. Used by Itachi.
-The Mirror of Yata: A physical and genjutsu shield that provides absolute defense. Used by Itachi.
-Indra’s Arrows: A lightning fast, viciously powerful arrow that pierces the enemy. Used by Sasuke.
-Yasaka Magatama: Orbs of black flame that resemble the magatama shape in Sharingan are created from Susanoo’s hand, then fired as projectiles. Used by Itachi, Sasuke, and Madara.

The rarest and most powerful of the three Doujutsu. In addition to being able to perform all of the nature transformations, the user gains access to the Six Paths, as well as the seventh, Outer Path. Anything summoned using the Rinnegan borrows the power of the Rinnegan and shares visual information with the original owner, giving them the ultimate defense.

The Seven Paths and other abilities of Rinnegan 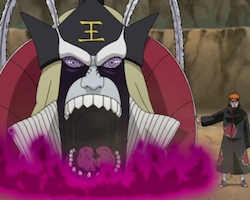 Allows the user to summon the King of Hell. He can be used to interrogate victims, although torture might be a more appropriate word. When summoned, a monster manifests from black smoke, and pulls out the target’s soul using armlike appendages that come from its mouth. If they lie during the questioning, they are killed.
The Naraka Path also has the ability to resuscitate things, healing any damage. 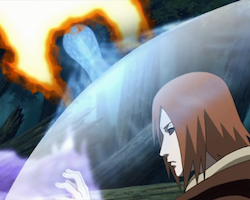 This absorbs all other jutsu or forms of chakra using the Blocking Technique Absorption Seal. It’s also possible to absorb someone’s chakra directly with physical contact. 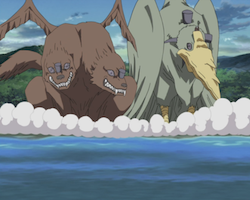 Allows the user to summon different creatures or animals. 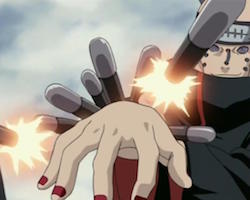 Allows the user to summon weapons and armor by modifying their body. 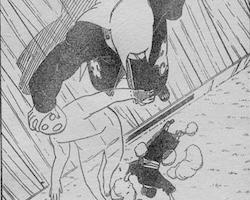 Allows the user to read the thoughts and memories of the target by pulling their soul out from their head or chest. The target dies as the soul becomes separated from their body. 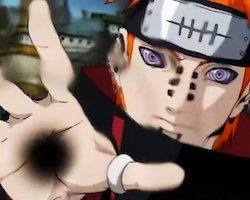 Allows the user to manipulate both attractive and repulsive forces. This includes the Shinra Tensei, Banshō Ten'in, and Tengai Shinsei. 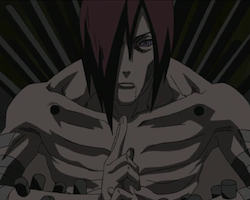 Grants the ability to use a high level reincarnation jutsu: Outer Path- Samsara of Heavenly Life. Also allows the user to create chakra paths, as well as control beings via chakra receivers. 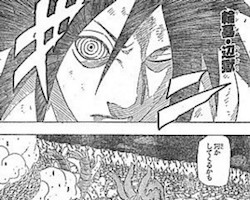 Allows the user to summon copies of themselves that are undetectable to anyone but the user. They can be used to attack or defend. 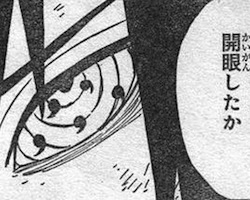 Allows the user to shift the positions of anything within a fixed radius in an instant. Ambushes and quick escapes are among the many uses of this ability.

Some shinobi are able to combine two of the five main elements to create a new nature.

Created by using Water and Wind Releases simultaneously. This includes the ability to create mirror-like ice blocks in which the user can move freely and quickly.

Created by combining Water and Earth Releases. The user’s chakra is used as a life source to grow plants almost anywhere. Useful for offense and defense, this includes techniques such as Four-Pillar House, which creates an undetectable house, as well as God: Nativity of a World of Trees, which ensnared all living beings and sapped their chakra.

A combination of Water and Lightning Releases. The user can emit a strong laser that can be bent and controlled at will, even avoiding allies and hitting only enemies.

Allows the user to create several different materials, such as lava, rubber, or lime, by combining Earth and Fire Releases.

Enables the users to effuse strongle acid liquid. The liquid dissolves everything it touches.

By combining Fire and Water Releases, the user can generate various gaseous materials, such as a highly corrosive, acidic mist, or steam created by boiling chakra, granting the user higher damage or propulsion.

Blows things up from the inside with a combination of earth and lightning chakra.

Allows the user to manipulate magnets and magnetic fields using wind and earth based chakra. Gaara’s sand uses this.

Dust Release is the only Kekkei Touta that has been identified. Kekkei Touka is a higher grade of Natural Transformation, and its users can combine three of the main chakra types.

Dust Release is a combination of Earth, Wind, and Fire. Creates a cube that expands outwards, destroying everything within it on a molecular level.

Kekkei Moura is even upper version of Kekkei Touka. Users of Kekkei Moura are able to combine all chakra types, including the Yin and Yang. These techniques are basically only usable by Kaguya Ōtsuki’s descendants.

The Invincible Techniques of Kekkei Moura 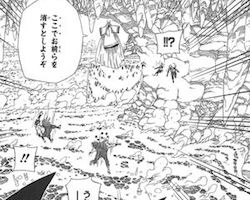 Techniques that allow the user to teleport instantaneously to different dimensions. It is also possible to open a rift to another dimension and put things in it. 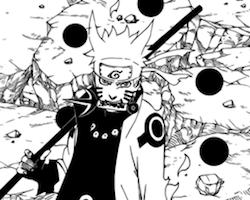 Balls of black chakra that float around the user. They can be morphed into different shapes, and serve an offensive and defensive purpose. They neutralize any ninjutsu they touch, and destroy whatever enemy they strike. The drawbacks are that the shape transformations are time limited, and they can be sent to other dimensions and permanently lost if not retrieved. 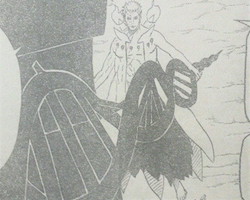 Rikudō Sennin’s legendary sword. It’s said to have created the world. Shaped like a strand of DNA with a double helix. 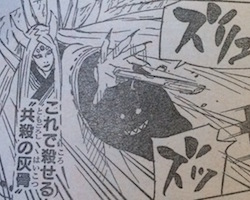 The user turns their own bones into weapons. Ash bones are fired from the palms, which deteriorate any living thing down to dust.

Passed down Kaguya’s clan, it allows the user to manipulate their own bone structure, including their osteoblasts, osteoclasts, and calcium concentration. As long as it’s bone-related, the user has complete control, to the point of being able to rapidly generate and shape it.

2. Attack of the Twin Demons

The technique that allows Sakon and Ukon to share a body. One person is absorbed within the other, while being able to freely shoot their limbs out from the host person. This technique can also be used against enemies by entering their bodies and decomposing them from the inside.