After all the suffering we've endured the last two weeks, will Diamond no Ace finally let us enjoy the moment? 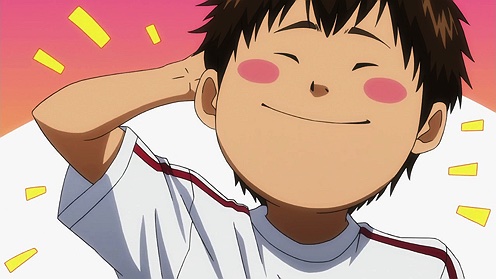 Was it worth all the pain, in the end - did the payoff justify eight innings of Furuya and one of the most egregious cliffhangers in a series and genre notorious for them? 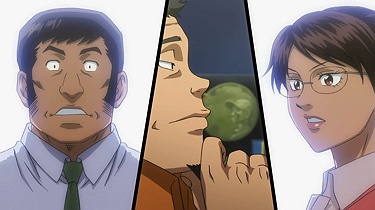 Well - yeah, pretty much. I got what I wanted out of this episode and then some. For starters (literally) there was the fact that we got to see the resolution of that cliffhanger before the OP - at least it wasn't dragged out any further than it already had been. Eijun got the pitch where he needed to get it, and just like that the game was over - a jam-job off the fists, a comebacker to the mound, and a double-play (when will these kids listen to me and stop sliding into first base?). 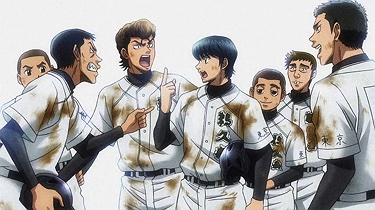 Obviously this represents a huge moment for Eijun - not just coming on as a closer and getting the three most crucial outs of the tournament, but getting the final two of them on an inside pitch against Ugumori's best hitter. But of course it highlights one of the inviolable truths about Diamond no Ace - for all the buildup they get, it's over for most (though not all) of Seidou's opponents in the blink of an eye. We did get a little postscript with Ugumori later, but all in all it was a pretty ignominious end for them. 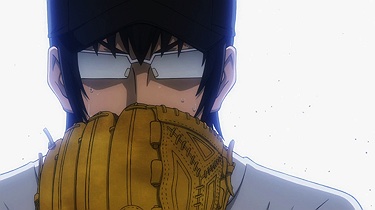 Speaking of vanquished opponents, we got to see a whole bunch of familiar ones as they stamped their ticket to the elite eight - most crucially Yakushi. Sadly for me my two favorite opposition teams faced off against each other, because Yakushi's opponent was Akikawa and their Taiwanese ace Shunshin You. I really, really liked Shun's story, and for him this really is the end, so as much as I like Yakushi I was rooting for him. But in my heart I knew it wasn't to be, and that challenging Raichi was a bad idea (challenging the cleanup is rarely a good idea in baseball manga). So long Shun, I wish we'd seen more of you - but more of the uber-baka and his bad-boy dad is a good thing. 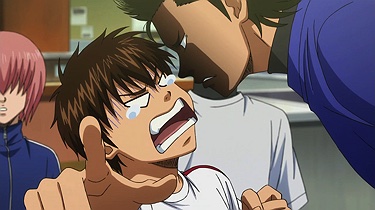 As for Seidou, all is not beer and skittles despite their huge win. Kawakami is sulking - though to be honest I don't think that's necessarily a bad thing, because any fire at all from that guy is a positive. Miyuki and Zono are still going at it tooth and nail, and that has ripples that impact the rest of the team (as you'd expect). There's a lot of "whose side are you on?" happening, and that's never a good thing. The fact is that as prickly as he is, Miyuki is the captain, and Zono is just going to have to learn to accept that. 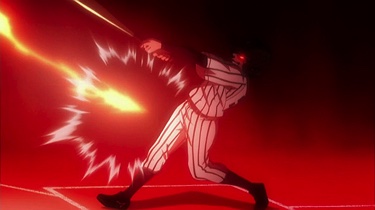 Everything comes down to Eijun and Furuya in the end, as it usually does. Ochiai is a character I have a problem with, because his main function seems to be that he's so awful he makes Kataoka look good, but he raises a very disturbing prospect for Eijun - that no matter what he does, Furuya will always be better. I don't necessarily believe that, or that Kataoka is developing Eijun mainly so that Furuya will stay motivated - the guy's an idiot, but that doesn't seem to be his style. 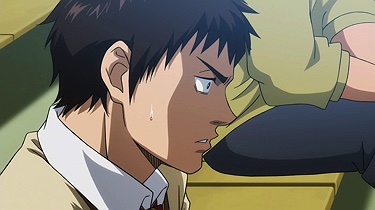 Kataoka is right about one thing - an offspeed pitch is what Eijun needs to get to the next level. He can now work both sides of the plate effectively, but all his pitches are about the same speed (and that's not Furuya-fast). Still - Eijun as he is has become a damn good pitcher. He's certainly been better than Furuya the last two games, and now Furuya is nursing an ankle injury he hid for the last three innings he pitched (we find out thanks to the previously almost anonymous Kudo-sempai). I don't see any reason Furuya should pitch the next game - Eijun is fresher, healthier, and he's pitching better. But in Daiya no A, I've learned never to count on what's logical actually coming to pass...