Notes:
● This semi-review is spoilerific.
● If you haven't already, you can watch the Madoka Magica TV series here, here, or here. Not available in all regions due to reasons.
● Seriously, if you haven't seen it, go watch it right now. It was at the very least the best anime of 2011, so do yourself a favor.

I saw Puella Magi Madoka Magica The Movie: Beginnings and Eternal - called "The Beginning Story" and "The Eternal Story" in Japan, because...why make things the same when they could be different? - at the New York screening on the December 26th, and I think it's worth talking about. Even though they're recap movies. They didn't change the ending and make it terrible make sense whichever you prefer. They didn't add a ridiculously awesome half-hour fight scene. And this...

...doesn't actually happen (It's one of the clips used in the movies' openings. Professionals call this a Ship Tease.). Then what could I possibly have to talk about? Let's find out...

Okay, the principal change between the series and movies is the staggering amount of visual and animation cleanup that has been done. Never has so much effort been put into making things look exactly the same.

[Image comparing series to movie. The image is very big, so click to view.]

Madoka Magica is dazzling on its first watch-through, but on subsequent watches it becomes clear that, particularly early on, there was some struggle in applying consistent animation. Of course, since Madoka Magica likely has twice the scenes of a typical anime, that's no surprise. The movies fix all this and there is nary a off-model shot in the whole production (except, apparently, for that one screenshot from the trailer).

There is a darker side to this, however. If you've paid attention to the Madoka Magica series, you probably know there were relatively significant changes in the backgrounds between the TV broadcast and the Blu-ray release. If you watched Madoka Magica on Crunchyroll, Hulu, Crackle, etc. you saw the BD release. If you watched it as it came out or torrented it, you probably saw the TV release.

[Comparison of broadcast and Blu-ray versions. The image is very big, so click to view.]

Well, with the release of the movies, shit has gotten to Star Wars levels of revisionism, as even backgrounds redesigned for the Blu-rays are redone yet again:

[Comparison of broadcast, Blu-ray, and movie versions. The image is very big, so click to view.]

The soundtrack to the movies was a mix of the music used in the series and some new stuff, which is live rather than synth and consists mostly or all of remixes of the original score. There's also a couple of new singles from ClariS and Kalafina, who did the opening and ending to the series, respectively. ClariS provides "Luminous", which serves as the opening song for the two movies. Kalafina serves up "Hikari Furu", the credits song, and "Mirai", both mentioned below, along with a new version of "Magia" - the credits song and occasional battle theme for the series - called "Magia [quattro]". "Connect", the series OP, is also used twice in the second movie, including once with some fresh instrumentation.

Regarding the music, I am going to employ that clever strategy of "say something nice, then punch you in the gut, so it all balances out". Actually, that describes the movie as much as it describes my approach. Er, maybe I'm showing my hand a bit too much with that comment.

[Here I embedded the song "Mirai" by Kalafina. Click to take a listen on Soundcloud.]

The moment I became sold on the goodness of the movies was when this began to play. "Mirai" ("Future") is a remix of "Credens Justiciam" ("Believe in Justice"), Mami Tomoe's theme, sung by Kalafina, Yuki Kajiura's personal Awesome Button, with lyrics in moon-speak rather than Kajiuran. This made me very happy.

The original version of Credens Justiciam is also used earlier in the movie. In fact, "Mirai" only plays once: during the montage of Mami fighting the minions of Charlotte, the Very Hungry Caterpillar.

[Here I embedded the song "Hikari Furu" by Kalafina. Click to take a listen on Soundcloud.]

And it would be a sin to fail to mention "Hikari Furu" ("Light Comes Down"), which is MOAR KALAFINA. Like "Mirai", this is a remix, this time of "Sagitta Luminis" ("Arrow of Light"), one of the songs used in Madoka Magica: Lost in Space during the Madokami scenes. It serves as the credits to the second movie. And manly tears were shed by all.

That's most of the good. Well, that's not exactly true - all the music is good, it can't not be good, after all. But unfortunately, the soundtrack no longer works, and that's because of the new music. There was no attempt to make the new music sound in any way similar to the music taken from the series. Yuki Kajiura's soundtrack is very distinctive - and goddamn epic - but it's also pretty restrained. It's a mixture of live and synth - that's like, her thing - but it only uses a handful of instruments. The new music is standard orchestral fare. That's not bad per se, but it clashes horribly with the series' music. There's no longer a clear musical direction.

This is doubly problematic, because even though the original music is better (at least, I would say so), the new music sounds better, because it's live and orchestral and etc. Why is this a problem? Well, the new music, despite often sounding out of place, sounds bigger, or, put another way, the original music sounds smaller. When one of a good dozen climactic scenes occur, still using the old music, they're less exciting, because they use the weaker-but-better score.

(Incidentally, does anyone know if Yuki Kajiura was responsible for the new music in the movies or if it was someone else?)

Like I said, the main problem with the new music is that it sounds out of place (and that it screws up the old music), but there are a couple of places where it's just bad. In the battle against Charlotte, a completely original song is used that gives the impression that Charlotte is toying with Mami. Okay, that makes sense. The problem is that the whole song expresses that one idea at the same level of energy throughout the whole scene. It doesn't change at all when Charlotte sheds her skin and takes on her True Form and Mami gets decapitated. You might say they should have thought ahead when they made that song.

A similar situation happens with the appearance of Elly, the witch that attacks Madoka in Episode 4. A sort of circus/merry-go-round tune is played for the entirety of the scene, from the moment the labyrinth appears to Elly's death. Yes, the exact same music plays for the entire battle. I want to call that lazy, but I can't, because this movie is not lazy. Maybe just the music work was lazy? Yeah, let's go with that.

I introduced the movie by talking about all the visual cleanup and the new backgrounds, but there's a bit more in that department I want to discuss. First, there are a couple of added scenes in the second movie. Not substantive scenes - they primarily exist to pad out the movie from 84 minutes (total length of Episodes 9-12) to 110 minutes (the length of the movie) - but new material nonetheless. For instance, remember the 30-second conversation between Homura and Kyubey at the end of Episode 9? Well, that scene now opens with an incredibly long pan that doubles its length. Oh, and did I mention it takes place in a CG graveyard?

I don't...honestly I'm not complaining about it, really. I just don't get it. Why are Kyubey and Homura talking at sunset in the world's largest cemetery? It's pretty, but there are lots of pretty things that aren't in the movie. What is the purpose of this scene?

Example of a pretty thing not in the movie.

Now this is also a place where definite positive change has been made. Minor stuff, but I appreciated it. Remember the old-timey countdown that heralds Walpurgis Night's arrival in Episode 11? In the series it counts down from five, but it uh...skips three. 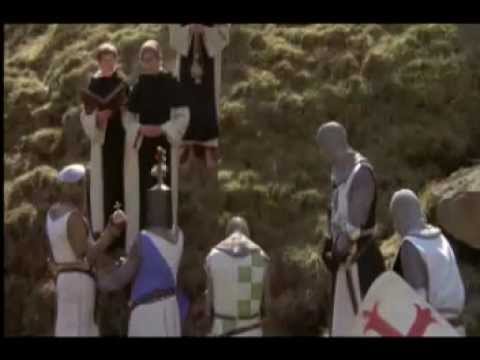 And King Arthur went on to found Studio Shaft.

The movie corrects this little hiccup.

Enough good things. Back to the crap. The movies change the composition of a few scenes. In particular, they seem to favor use static, wide shots rather than...interesting ones. Someone who has more than zero knowledge of cinematography could explain it more properly, but I'll give an example and hope its illustrative.

At the end of the first movie comes the wham procession that is Episode 8. It's the part where, you know, this happens:

SPOILER: He li - what's that? That joke's so obvious it's not even funny?

In the movie, this entire scene - Madoka talking to Kyubey, then talking with Homura, then new!Kyubey chatting with Homura - all takes place while the camera continuously cuts back to a boring, flat, wide-angle shot. The series, by contrast, uses a variety of shots to keep this long, all-talky scene from becoming boring. For instance, when Kyubey tells Madoka she could become a god, there's a shot of the jet of water from a nearby fountain rising into the sky. That's called a visual metaphor.

I have a theory as to why they repeatedly cut back to this wide shot, and it has to do with that fountain. The fountain was redesigned for the Blu-ray release and, it was re-re-designed in the movie so that it now has a fancy CG laser light show going on in it. My guess is they were really proud of the new fountain and wanted to show it off to everyone. They worked hard on those spinny lasers, damn it!

All kidding aside, there is one big, big problem with the movies that needs to be mentioned: Kyubey's face. Kyubey is rather well known for his...rarely changing facial features...

But the other 25%, Kyubey's face for some reason looks like...

"Make a contract with me and become magical -"
"WHAT'S WRONG WITH YOUR FACE!?"

In closing, I'm not saying these movies are bad. It's Madoka FUCKING Magica after all. They're good, they're great. But what's important is that these movies don't stack up when compared to the original series. I'd recommend the series over these movies. They're simply not as well constructed. And Kyubey has a mustache for some reason.

Additional Info:
My thoughts on the trailer for Madoka Magica The Movie Part III: Rebellion are here.

Where can I watch this movie with a really long name? If you live in the US, check the official website to see if there's going to be a screening in your area (at this time they're just about over).

Note: Due to the nature of uploading music on the interwebs, one or more of the music links and embeds here could easily go dead. If you've found a dead link, drop a comment and say so, and I'll fix it if possible.
Posted by DrCakey | Feb 26, 2013 8:25 PM | 0 comments