REQUIREMENTS: Find and watch a series...
[✔] that's rated G - all ages Kaitei no Boukun
[✔] that only has an English alternative title. Pinky
due to difficulty, series with English and Japanese alternative titles will be allowed; series cannot have a Synonyms alternative title
[✔] that was broadcasted on a Saturday Vampire Holmes
must actually say "Broadcasted: Saturday..." if there is no broadcast info. listed, it doesn't count
[✔] with less than 500 on-holds. Shigofumi Special (86 On-Holds on 2016/09/18)
[✔] where a character has more than 3 VAs listed Detective Conan OVA 01: Conan vs. Kid vs. Yaiba
character must have a minimum of 4 VAs (cannot equal 3)

REQUIREMENTS: Find and watch a series...
[✔] that only has an Aired year with no specific month or date Pop
Found under Information, it'll say "Aired: 2001" (Example); Blank or no "Aired" option will be accepted as well
[✔] that was broadcasted on a Friday Yojouhan Shinwa Taikei
must actually say "Broadcasted: Friday..." if there is no broadcast info. listed, it doesn't count
[✔] with more than 10,000 drops Devil Survivor 2 The Animation (10 183 on 2017/04/03)
[✔] from a voice actor/actress that has more supporting roles compared to main roles. Konishi Katsuyuki from D-Frag!
Supporting Roles: ## || Main Roles: ##
[✔] where a support character has more than 500 member favorites Detective Conan OVA 11: A Secret Order from London

REQUIREMENTS: Find and watch a series...
[✔] that's 12 episodes long with a duration of 22 minutes per episode Udon no Kuni no Kiniro Kemari
[✔] that was broadcasted on a Thursday Yuri!!! on ICE
[✔] that has only one fansub group listed. Utsu usumu Sayuri
[✔] that has over 50 clubs associated with it Ore no Imouto ga Konnani Kawaii Wake ga Nai.
[✔] that has snakes in it Hakkenden: Touhou Hakken Ibun
specify the exact episode (if not reoccurring)

REQUIREMENTS: Find and watch a series...
[✔] that was broadcasted on a Wednesday Bishoujo Yuugi Unit Crane Game Girls
must actually say "Broadcasted: Wednesday..." if there is no broadcast info. listed, it doesn't count
[✔] that has no Producers Candy Boy Episode: EX01 - Mirai Yohouzu
[✔] that has 5 or less clubs associated with it Aos (5 clubs on 2016/09/24)
[✔] that has dogs in it. Space☆Dandy (Episode no 8)
specify the exact episode (if not reoccurring)
[✔] where one of the main characters was favorited more than the series. Hatenkou Yuugi (Serie has 174 favorites, Anadis Rahzel has 203 favorites on 2016/09/18) 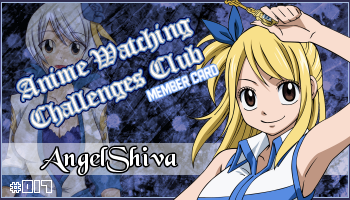